Crash Bandicoot 4: It's About Time, tips and tricks to start playing

Crash Bandicoot 4: It's About Time has finally come out a few days on consoles, in this guide we will give you some tricks and tips to start playing

Crash is finally back with a title from the main series and brings with it a lot of new features to explore. A game that has no desire to revolutionize the Bandicoot games, but more than anything else it evolves the basics and enriches the contents. Space-time is one of these great novelties and crash will have to dominate it to complete his mission. However, great power comes with great headaches if you don't know the type of game well. With this guida per Crash Bandicoot 4: It’s About Time we want to help you get started by providing you with some tips and tricks.

In this title, Crash Bandiocoot and Coco will have to travel in space and time to stop the diabolical plan of the Dr. Neo Cortex, Nefarious Dottor Tropy and the diabolical mask Uka Uka. For this difficult task the player has several characters to use: our Crash, Coco, Tawna, Dingodile and Cortex. You will also be able to obtain the supreme power of space-time masks to give more variety to the gameplay. In this guide you will find out what their powers are and many other interesting things. Let's not hesitate any further and find out what are the tricks and tips we have in store for you who want to start playing Crash Bandicoot 4. 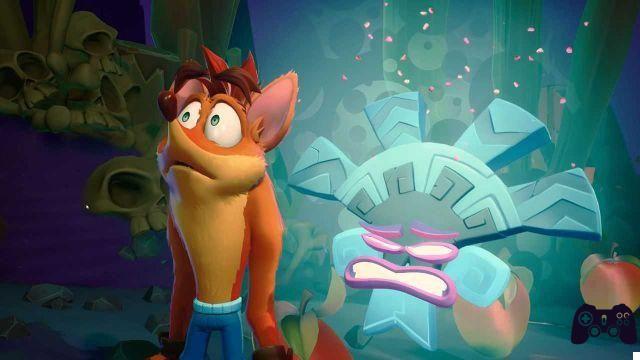 Boxes at every corner - Crash Bandicoot 4: It's About Time, tips and tricks to start playing

If in Super Mario the levels are full of coins and in Spyro of crystals, when playing Crash Bandicoot you can only expect hidden boxes in every corner. Crash Bandicoot 4 is full of them. If you spot one crack there's a big chance there's a box underneath. They can be found in hidden rooms, below strane texture and even submerged by lianas. Look everywhere to find them all, especially in places where you might not immediately see them. To find all the boxes and get the special gem, you will have to remain constantly vigilant.


However, don't lose your mind. Crash Bandicoot 4 is great when played in a relaxed pace. During your first play, only commit yourself to having fun, but if you want to do completism that does not become a job. The game is rich in content and because of this you risk getting bored and losing what it has to offer. There are apples to find, secret areas to find and a host of challenges that will keep you glued to the screen for hours. So if you miss any, take a deep breath and keep enjoying yourself! 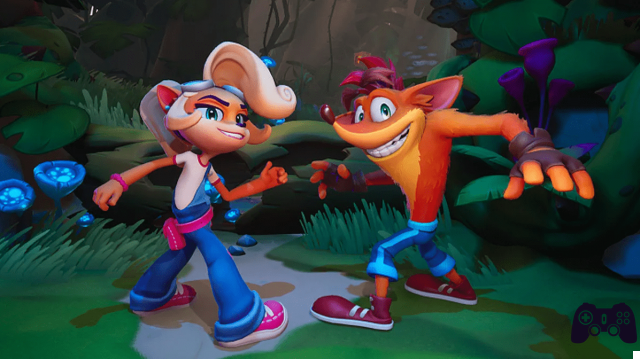 The best difficulty for you - Crash Bandicoot 4: It's About Time, tips and tricks to start playing

It is known that Crash Bandicoot has always been a difficult video game, with punishing challenges that forced the player to restart entire levels. Many of these gameplay difficulties were discussed extensively upon the release of the three remakes, extremely faithful to the originals. The developers have created a separate difficulty for anyone who wants to embark on a not too exhausting adventure. Is called Modern mode and gives the possibility to every fatality, to return to a checkpoint not too far from the place of death. But we do know that some old school players will turn up their noses at this way of playing.

The old previous Crash titles in fact, threw you out of the level as soon as the lives were finished, increasing the degree of challenge, but also the frustration at atomic levels. There Classic mode meets this other type of player, adding further "suffering" to the style of play. However Crash Bandicoot 4 is hard enough on its own, even without the old screw system. The choice is yours, you decide without regret how you want to face the game, there are in fact those who simply want to have fun without frustration whatsoever. 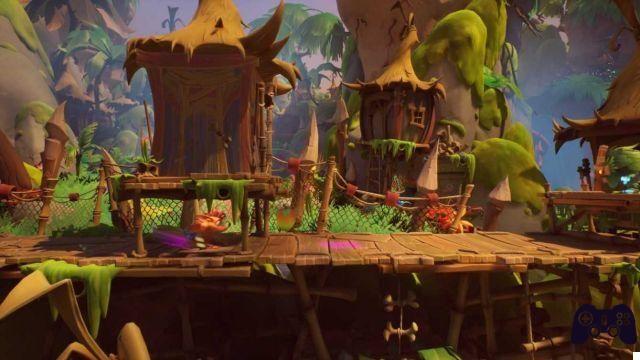 Precise Jumps - Crash Bandicoot 4: It's About Time, tips and tricks to start playing

Understanding the right way to make the different jumps in the game can be difficult for a first-time Crash player. In fact, in 4, many of the skills that the Bandicoot has learned in previous titles are immediately available. This will inevitably lead some players to unfortunate falls and trips. Just remember that you can do a double jump, jump slightly higher with a slide e get more height by bouncing off the boxes pressing the button at the right time. Techniques that must be remembered in order to reach many of the secrets scattered throughout the levels. But it doesn't stop there.

Jumping is not the only aspect to consider, since landing is just as important. In this regard, by following the position of your shadow, you should be able to understand on which surface you will end up. Also in Crash Bandicoot 4, a yellow circle every time you jump or are in the air. This proves that you are not the only ones having difficulty perceiving depth in Crash Bandicoot. 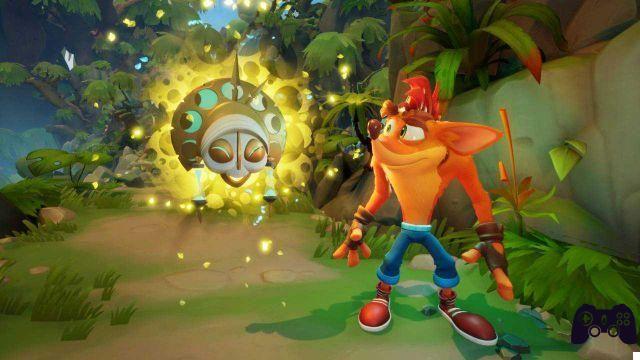 All Masks - Crash Bandicoot 4: It's About Time, tips and tricks to start playing

One of the most interesting components of Crash 4 gives the game its name: the manipulation of space and time. As in almost every game in the series, it is the masks that give the crazy animal the supreme powers. In this case we can find four of them in the game, and each with its own special powers: 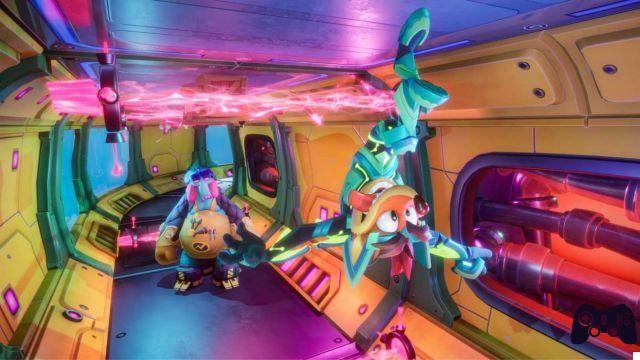 Study the Enemies - Crash Bandicoot 4: It's About Time, tips and tricks to start playing

Crash Bandicoot 4 is a really well done game and there is also a good variety of enemies to face on its side. Each of these presents a different challenge, from the initial ones that you will break down with little to others that need some small strategies. To understand how to beat them you will have to sharpen your eyes and understand according to their movements the right way to deal with them. If they whip their swords in front of them, it is advisable not to attack them from the front, you should instead jump on their heads or attack them from behind. Conversely, if they have a hat with a flamethrower, bouncing off them will be lethal for you.

However, don't worry too much about death, as the game will offer assistance in that case. Dying 5 times in a single checkpoint will give you an Aku Aku mask, dying 10 times will give you a golden Aku Aku and dying 15 times will change a box later into a box for the checkpoint. All these gifts only if you die in the same section of the level. 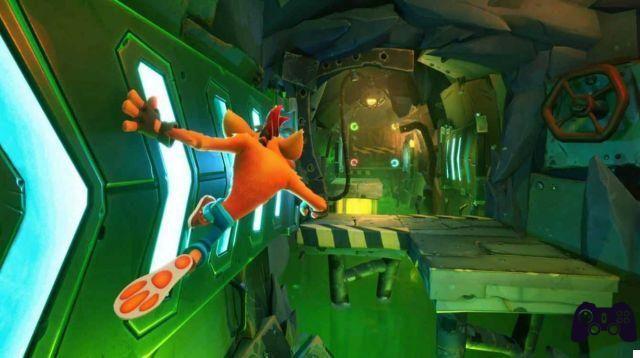 This guide on tips and tricks to start playing Crash Bandicoot 4: It's About Time has come to an end. In case there are any doubts or you want clarifications, ask us your questions below in the comments! Otherwise we advise you to take a look at our other guides: how to unlock all the skins, the list of levels and the list of all the trophies.

Crash Bandicoot 4: It's About Time is a game developed by Toys for bob and available on PlayStation 4, and Xbox One. I invite you to continue following us to stay updated on video games and technology.

Crash Team Racing: Nitro-Fueled, how to get Wumpa Coin! ❯

The complete solution of SOCOM 3: US Navy Seals

Pile Up !: the complete trophy list of the curious platformer revealed!

Add a comment from Crash Bandicoot 4: It's About Time, tips and tricks to start playing