What is a liquid crystal display (LCD)? 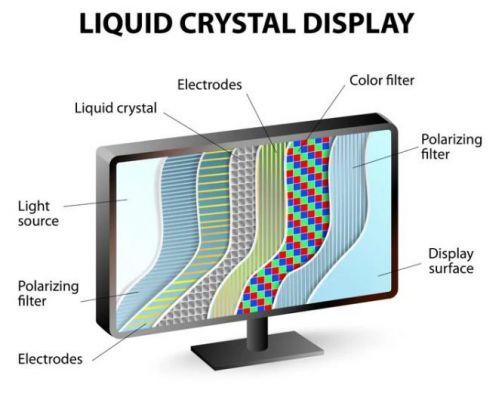 
Generally, LCD refers to a device that uses the light modulating properties of liquid crystals, used on flat screens such as those in laptops, calculators, digital cameras, digital watches and other similar devices.

How Do LCD Screens Work?

As the name “liquid crystal display” indicates, LCD screens use liquid crystals to turn pixels on and off to reveal a specific color. Liquid crystals are like a mixture between a solid and a liquid, in which electric current can be applied to change their state so that a specific reaction occurs.

These liquid crystals can be thought of as a shutter. When the shutter is open, light can easily pass through the room. With LCD screens, when the crystals are aligned in a special way, they no longer allow that light to pass through.


It is the back of an LCD screen that is responsible for the bright light through the screen. In front of the light is a screen made up of pixels of red, blue or green color. Liquid crystals are responsible for electronically turning a filter on or off to reveal a certain color or maintain that black pixel.

This means that LCD screens work by blocking the light emanating from the back of the screen instead of creating the light itself as CRT screens work. This allows LCD monitors and TVs to consume far less power than CRTs.

LCD vs LED: what's the difference?

LED stands for light emitting diode. While it has a different name than liquid crystal, it's not something entirely different, it's actually just a different type of LCD screen.


The main difference between LCD and LED screens is the way they provide the backlight. Backlighting refers to how the screen turns the light on or off, something crucial to delivering a great picture, especially between the black and colored portions of the screen.

The difference between the two is that CCFL backlit LCD displays can't always block out all black colors, in which case something like a black on white scene in a movie may not appear so black after all, while LED backlit LCD displays they can localize black for much deeper contrast.


If you have a hard time understanding this, consider a scene from a dark movie as an example. In the scene there is a very dark and black room with a closed door that lets some light pass through the lower crack.

An LED-backlit LCD screen can peel off better than CCFL-backlit screens because the former can only activate color for the portion around the door, allowing the rest of the screen to remain truly black.


Not all LED displays are capable of dimming the screen locally like you just read. It is usually full-array TVs (versus those with side lighting) that support local dimming.

Learn more about the LCD

It is important to be especially careful when cleaning LCD screens, be they TVs, smartphones, computer monitors, etc.


Unlike CRT monitors and TVs, LCD screens don't have a refresh rate. You may need to change the monitor refresh rate setting on your CRT screen if eye strain is an issue, but it's not necessary on newer LCD screens.

Most LCD computer monitors have a connection for HDMI and DVI cables. Some still support VGA cables but it is much less common. If your computer's video card only supports the old VGA connection, be sure to double check that your LCD monitor has a connector for it.

You may need to purchase a VGA to HDMI or VGA to DVI adapter so that both ends can be used by each device.

What is a liquid retina display? ❯

add a comment of What is a liquid crystal display (LCD)?