New year, new episode, new Agent. Riot Games does not stop and to usher in 2021 it presents a new character. Today we show you Yoru, Valorant's new agent, with a guide to his skills

The new Agent of Valorant, directly from Japan, debuts on the battlefield. yoru play with illusions to open glimpses of reality and sneak behind enemy lines. In the words of Riot Games, "using a mix of aggression and subterfuge, Yoru manages to get the better of any target before he even notices his presence". Let's find out together Yoru, the first Agent of the new Valorant episode, in this guide to his skills.

From Japan with fury

Yoru then comes to enrich the roster of Agents of Valorant. The sample looks like a lethal killer, capable of disorienting the opponent and breaking through the enemy lines unnoticed thanks to his skills. With a varied and versatile skillset, this Agent can be lethal on offense and just as effective in flanking when it comes to defending the point. Let's go into detail of his skills to better understand how to use Yoru. 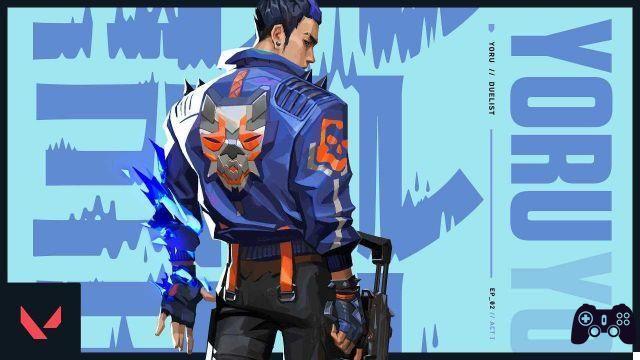 Equipping this ability, Yoru rips an unstable dimensional fragment from reality ready to be thrown. With the left button the fragment is launched, activating a lightning which triggers after bouncing off a surface. The result is a blind similar to the many already present in the game, with the difference that it is the only one that can bounce off the walls. This ability can be extremely useful for attacking opponents by disabling their vision, as well as defending to buy time or try to defend Spike.

Equipping "Infiltration", Yoru harnesses a dimensional portal. which allows him to teleportation at a certain point. With the left mouse button it is possible to push the fault forward to the desired point. Subsequently, with the right button (alternative fire) it is possible to place the fault before being able to teleport to the point reached. Teleportation is finally activated with the skill button. Infiltration is useful in several ways: it can be used to escape from dangerous situations as well as it can return extremely useful to reposition yourself in an advantageous situation. Likewise, it can be used to teleport behind enemies to catch them off guard.

In this regard, there is currently a big bug with this ability, which allows Yoru to throw himself into the enemy base to take opponents from behind from the start of the match. Riot, however, is working to resolve.

The Deception skill is probably the newest and most distinctive of Yoru's skillset. With this skill, it is possible to equip an Echo that imitates the sound of footsteps upon activation. With the left mouse button it is possible to activate and send the echo forward, and then deactivate it. Once launched, using the right mouse button (secondary focus) it is possible to place the echo in a point. Finally, with the skill button the skill that simulates the steps for the entire length of the cast is deactivated. This skill is also extremely versatile, and it turns out excellent in the flanking phases or to create effective diversions both in defense and in attack.

Dimensional Rift is Yoru's ultimate. Pressing the X key equips a mask that allows you to see between the dimensions. By pressing the left mouse button it is possible to slide into the dimension of Yoru; the result is that the Agent it cannot be touched or seen from enemies outside. The ability then makes it invisible and intangible to enemies for several seconds after activation. As well as the teleportation ability, this too has different uses, mainly based on repositioning and the surprise effect.

As elusive as a shadow

It is clear that Yoru is a swift, elusive and deadly Agent. As a good assassin, his main goal is to hit opponents when they least expect it, leveraging his skillset designed to be invisible. Thanks to its extreme mobility, Yoru can be a real tough nut to crack and don't lose sight of it could be the key to effectively countering it. Often distancing and analyzing his moves from afar is the right choice, while the fight in 1 1 in at short distances it can be disadvantageous.

In twisted, blind-spot-filled maps like Icebox, Yoru is at his best, using repositioning to break through the opponent's defenses from within. Pay attention above all to its Deception ability, which being a novelty in the game can easily deceive (precisely) the opposing players.

This, friends, was our quick analysis of the latest Agent of Valorant. We hope we have been helpful in showing you Yoru's skillset in this guide to his skills. If you have anything else to point out we are waiting for you as always in the comments, and we invite you to stay connected on Holygamerz for more guides, news, reviews and much more. Bye!

WarioWare: Get it Together, how to level up characters ❯

add a comment of Valorant: Guide to Yoru's skills