The Last of Us Part 2: where to find Ellie's bow

If 20 days after the release of The Last of Us Part 2 you are still tormented by the thought of such a perfect game and you are preparing for the second run, let us accompany you to discover one of the most iconic weapons of the game: the bow by Ellie

If Ellie is the protagonist (undisputed or not) of the game, the bow is certainly the most representative weapon. Of central importance from the very first game, the bow has always proved to be a weapon precise, silent and lethal, as well as the best tool to quickly and stealthily lighten environments teeming with enemies. For this reason, today we want to explain to you where to find Ellie's bow in The Last of Us Part 2, e come usarlo.

In The Last of Us Part 2 there are a total of 12 weapons scattered here and there that you can find and collect, and upgrade later on. Although the game is quite "punitive" towards players who lose a few objects or who do not go through every corner of the game properly, with weapons the situation is different. In fact, unlike collectibles and safes, in case we miss some of the weapons the first time, the game will continue to randomly generate it in other locations, in order to make it easier to find them. Once found, weapons can be upgraded at Workbenches using the Spares.

Today we want to talk to you in particular about the most representative weapon of The Last of Us Part 2: the bow. Despite being slow and single-shot, Ellie's bow is one of the strongest weapons in the game, even considering the upgrades. This weapon, in addition to being 100% silent, is also one-shot from the chest up, and once you take your hand it will become an essential tool. 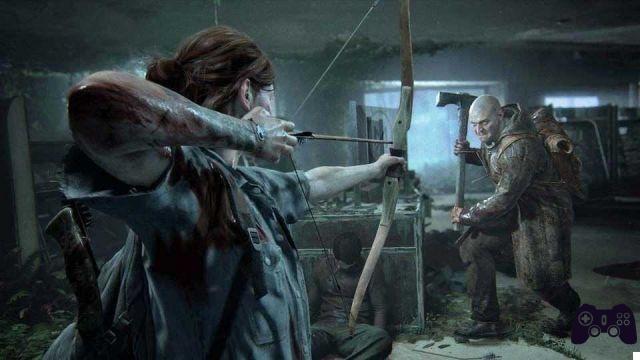 Actually finding the arc in The Last of Us Part 2 is simple enough, being on the main path of history. This weapon, in fact, can be collected in Chapter 16 (Hillcrest) with Ellie. After seeing black smoke in the distance, you will be forced to go through a building, passing through the garage. Once inside you will be attacked by a new type of infected enemy, which will have the arch around the chest. Kill him and collect the bow from his body. Furthermore, immediately after opening the garage, you will see some archery targets where you can practice. At this point, if you have not yet collected the bow from the enemy's corpse, you can go back and take it anyway.

The bow is slightly different from the other weapons in the game for a number of reasons, which we will explain to you in the next paragraph. The most peculiar feature, however, is that of being able collect and build arrows. In fact, in case the arrows do not break on contact with the target, it is possible to collect them to reuse them a second time. In addition, it is possible to build both normal arrows and arrows with the materials found of explosive arrows, capable of inflicting massive damage on even the biggest enemies.

In the course of the game it is possible to improve the bow with 3 different upgrades, in particular:

How to use the bow - The Last of Us Part 2: where to find Ellie's bow

The bow has different methods of use than the other weapons in the game, and to use it to the fullest you have to take into account some things. The first is that the amount of damage from this weapon depends on the distance from the enemy: the closer the enemy is, the less damage we will do to him with the bow. Furthermore, the power of the nock it greatly affects the damage we will inflict on our enemy, which means that a longer nock will not only make the arrow travel farther, but will also inflict greater damage on our target. Remember to stay still when using the bow, because the arrows shot in motion are much less effective of those shot when stationary.

Finally, one of the key factors to take into account when using the bow is the drop curve of the arrow. As in all long-range weapon games, there is also the “drop” factor in The Last of Us Part 2. The drop is the characteristic by which a bullet drops the curve of its trajectory after a certain distance. Basically, it is that factor that forces us to always aim a little higher than the head if we want to do headshots over long distances.

The bow has a fairly pronounced drop curve, but it is possible to unlock between weapon upgrades a rangefinder which shows us where exactly the arrow will fall. Thanks to this enhancement it will be enough to make the "dot" of the reticle coincide with the target to hit it without problems, to carry out a kill oneshot both on infected small and medium caliber and on human enemies. 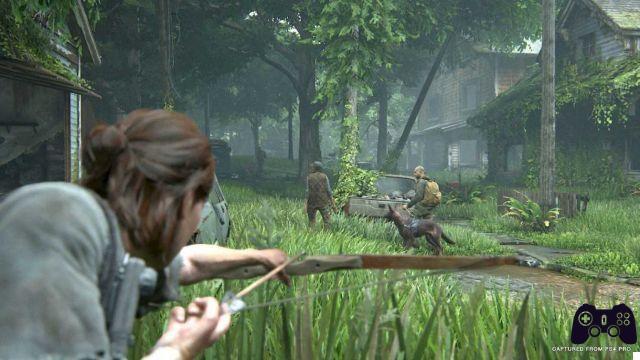 … Or to die quickly

Well friends, this was our little arc guide for The Last of Us Part 2. Remember what the arc is the most stealthy ranged weapon of the game, so do not hesitate to use it to take out the furthest enemies without being discovered. If you liked the game (and we wonder how the opposite could be possible) or have already platinum, do not hesitate to leave a comment with your considerations.

As always, we wish you a good gaming session and remind you to stay connected on Holygamerz for further guides, news, reviews and much more from the world of video games. Hello and good adventure!

The Last of Us Part 2: Safe Combination Guide ❯

add a comment of The Last of Us Part 2: where to find Ellie's bow