The next Super Smash Bros. Ultimate online tournament will focus on assistants: we briefly explain what to expect

And again this week we arrived at Wednesday: the time has come to see which event, in this case a online tournament, will brighten our weekend in Super Smash Bros. Ultimate. After having given us an appointment on the Spirit Board with the celebration of the twentieth anniversary of Nintendo GameCube, this time the fighting game of Masahiro Sakurai celebrates the characters who "almost made it". The title of the tournament is "Assistants galore”, And will allow us to have potential great allies on our side. Of course, we will take advantage of this to add another one appendix to our guide.

Let's start first with what you need to know in the context of this week, namely the details of the Super Smash Bros. Ultimate online tournament. This event will begin the day after tomorrow, Friday September 17, at eight in the morning, and will end at the same time as Monday 20. Gli clashes they will be timed and will last two and a half minutes, but the Final Smash Bar will not be active. Rather, the appearance of tools (Smash Sphere and, of course, Assistants) will be set to “Many”. That said, you will want to know what awaits you: we are here to satisfy you, of course! 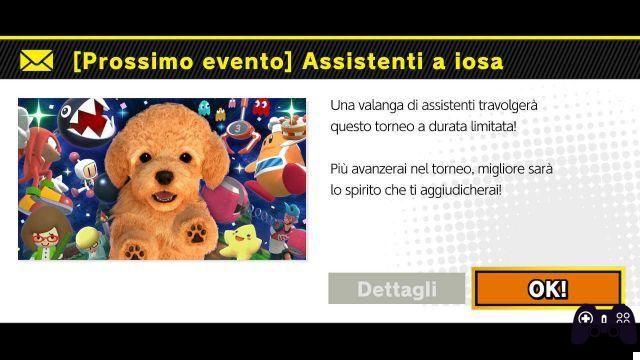 - Assistants appear in the form of encapsulated trophies and must be collected by the player (A). You can also prevent another player from using one, but you have to attack it quickly. Once an Assistant has been collected, the player will remain in place for a second and will raise the trophy in order to free the contained character. To increase interaction with some of these fighters, Ultimate has included the ability to attack them: KOing them not only makes them look a little less like "excluded characters", but also serves to save their skin. Not all evil comes to harm: after all, Little Mac, Dark Samus and Fuffi first made their debut as Assistants.

In the previous appendices to the Super Smash Bros. Ultimate guide, we have glossed over some of the content, but this time you will need to know who you will find in the tournament. Here is a short list.

Now it is up to you to tell us yours: did our guide to the Assistants help you? Let us know below, and as always don't forget to stay on Holygamerz for all the most important news for gamers and more. For your purely gaming needs, you can instead find the best discounts in digital format on Instant Gaming.


Do you want to be a video game expert and know all the tricks, guides and reviews for your video games ? Holygamerz.com is a group of video game fanatics who want to inform you about the best tricks, guides and tips. We offer you the best information to be a reference in gaming, so here you can find guides, tricks, secrets and tips so you can enjoy your games to the fullest. Are you ready to get all the achievements of that game that you resist so much? Enter now and enjoy your favorite video game to the fullest!
Super Smash Bros Ultimate: Online Tournament "Playing with Fire" ❯

Days Gone: how to find all the hordes