The market is large and there is room for everyone. The digital market is becoming immense and instantaneous, the risk of getting lost is high. Will the competition between Steam and Epic Games be fierce?

Being seen is essential. Advertising is no longer enough: you have to become an event, a phenomenon, worship.

Here we are not talking about shops near or far, small shops versus shopping centers. 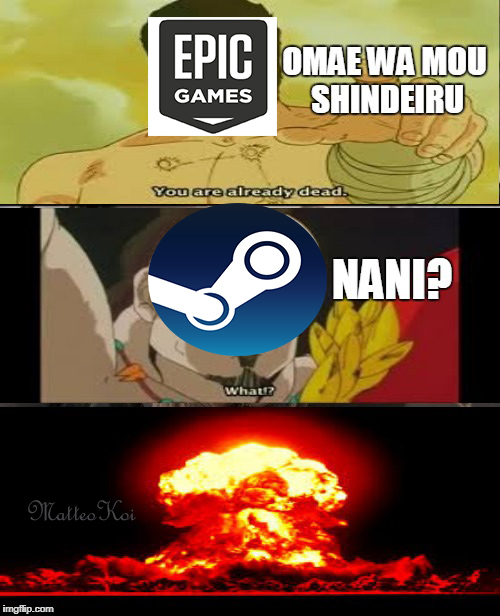 Are we sure it's just a purchase?

My library is full of things. Some I read, others I look at, others just gather dust.

They have to stay there, if I don't read them they will read themselves. I have the console off. It will play itself, it will be anchored to reality and so it will save me too. I am empty, metropolitan and global and I have to change all the time. Change to change.

My things remind me of what I can be. As long as the flame stays on.

What about my digital stuff? Are they numbers on a server? Nothing more naive. Believing that a reality exists and an unreality on the other hand is alienation, self-deception.

My digital things make up for my interiority. They are the visual fetish of my soul, of my sense.

We've already asked someone, haven't we? What are you playing? How many games have you collected? Let me see. In my library there is this, because I enjoy it like this.


In my library there is Me. Do you remember when I cried, at the Red Dead Redemption 2 finale? When did I cheer on Mass Effect 1, or when did I secure hell for Dark Souls 2?

As a child he was alone Commander Keen and now, clutching, I shoot the monsters again. Mutants or Nazis they are.

We are in our libraries. Our lobby, our strategies, our savings for future purchases. User reviews, indignation, disappointment and amazement.

But when do we talk about Epic Games?

So we're talking -actually- only of a digital store? Can we solve it without talking about our habits and without mentioning the immense importance of safeguarding our bailouts?

Because? It can't concern me.

But which gamer chooses an IP based on the store's turnover? Come on, let's not joke. Do you know why we download everything and everyone from Steam? Why has entered the videogame culture?

It didn't just offer a download platform. He has been able to interpret the need of the most fundamentalist wing of the players (the PC Gamers in fact) and has been able to pamper and bring them together.


Specific: the pg gamer knows that the platform is "just a platform" but behaves differently. To clarify further: I buy the latest cell phone, expensive and trendy; I know it's stuff I don't know and it's just an elegant piece of metal BUT I flaunt it anyway.

Mind you: it's not a praise to Steam. It is not a sponsorship. It is to take note of a anthropological event. Enter fully into those practices that do not need to be justified. I'm. Simply. Is Gta 5 Released? I want to play it on PC. Where do I get it? Need to say?

Often then misleading instances are used to criticize Steam.

For example: too many games are released on Steam per day and the quality is low; so we don't allow excellence to emerge.

Here the problem is twofold. On the one hand the criticism of the freedom of corporate policy and on the other hand the redundant expertism.

Only those who are afraid of it criticize freedom, who does not know and does not know how to choose. Whoever speaks of "too much freedom" proves intolerant of others, of the expressive and experiential needs of other people.

Furthermore, we enter a dimension that is not the buyer's responsibility. With all due respect to the many market critics.

If I buy a car, I don't evaluate the competitor's sales figures. I do not ask the owner of the dealer what his commission is on the vehicle sold.


And hold on tight, I don't buy a car X just because they have the exclusive car Y there.

But how much mystification and how much fanaticism are there in our world?

We are perverse in our complicating life. Then we complain that we are not taken seriously.

One thing is the philosophy of the video game - noble intent. So think about the video game. It is one thing to waste time looking for the noumenon!

Quality is another mystification.

All ready to take part in the good taste competition. Dear connoisseurs: even a bad game can be entertaining. As long as you play for yourself and not to kill yourself on the forums. Fortnite also deserves more respect. Have fun.

Elsewhere I have read about the failure rate on Steam.

This can be seen as a benchmark, a test bed in a market that has something special.

Only those who are most appreciated and "bought" manage to re-enter expenses and continue in the passion.

The same goes for bakers or shoe shops. Boom!

The relationship is merciless but that's right. Gaming platforms are not for charity and the market is always right. It should be noted that those who accuse undeserved criticism of too much freedom given to developers on Steam: it is the same who is disappointed by the excessive failure of the developers themselves.

The whole initial digression was the introduction to the mere observation of how useless the quarrel between the two platforms is, at least seen in the light of redundant technicalities.

Steam has been successful because it has been able to attract the trust of users and subsequently of developers. It's not like the consoles, where the opposite can only happen. 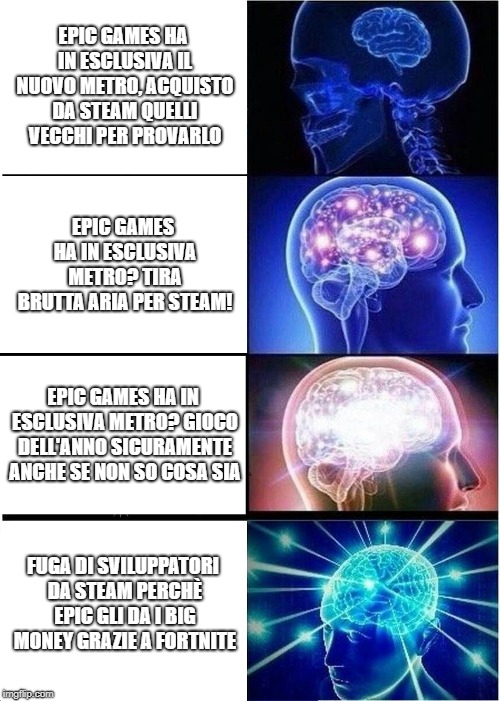 Is Epic Games destined, then, to be a flash in the pan? Is it destined to burn Fortnite's earnings in impossible competition?

No, absolutely no. Epic has shown over the years that it knows how to do it, to bring out respectable titles, to enter the cultural landscape (Fortnite will still be talked about) and to know how to manage.

Certainly its download platform will have other exclusives, otherwise it could not differentiate itself.

If they can pull off another Fortnite then hats off.

If there are any new exclusives, let's get ready for a platform war.

If the competition between Steam and Epic will be even better at discounts!

Fair and regulated competition between the two companies will be fresh air in the market. As gamers we shouldn't be afraid of exclusives like on consoles. we should just be careful with graphics cards, but we already know that.

The talk about non-competition

You can compete on the same product, market, and choose to be different.

The target market is the same. Corporate policies do not.

To make people understand the quality and superficiality of the criticisms: no one talked about Origin, its Apex Legend, and the best game download.

One of the few things that could actually concern consumers was not considered! If I have / can choose to download a game between the Alpha platform and the Beta platform: I will choose the fastest platform.

This is a better service, which could build future customer loyalty. We know it's not enough because habits are hard to overcome. however, it remains an important ingredient to weigh. First the avant-garde begin and after the train becomes massive.

So removed from the usual fanaticism, the only news that deserve to be talked about are: Metro Exodus is a big game but not a killer application and Apex Legend is getting talked about.

After Fortnite let's expect more battle royal infestations (and say that the RPG fashion was still raging) and we shouldn't be surprised at a Far Cry 6 in this mode (I shot high, huh?).

The developers will take the necessary measures. If they choose to abandon Steam, en masse, it will certainly be an event to study, things that the creation of the Suez Canal can only accompany.

Are Steam and Epic Games immortal? Maybe even Coca Cola isn't, not even after inventing Santa Claus and the polar bear.

Special Technology and Final Fantasy: a coexistence through the ages ❯

Watchdogs Legion Special: Anyone is Anywhere

Special Digital Identity: Are you really sure it's you on the internet?

PS5 Special: All the games shown during the reveal

Add a comment from Steam vs Epic Games special, but why?