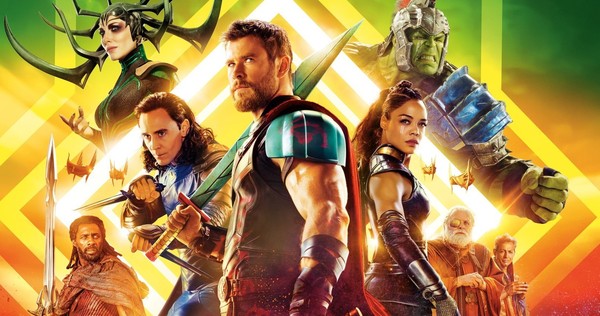 After Guardians of the Galaxy Vol.2 and collaboration with Sony for Spider-Man Homecoming, Marvel Studios concludes its 2017 with Thor: Ragnarok, the third film dedicated to the thundering to be released on October 25th under the direction of Taika Waititi. At the kind invitation of The Walt Disney Company, we previewed Thor's latest adventure, and we're ready, as always, to give you our gut impressions (and without any spoilers).

We did not see Thor (Chris Hemsworth) from Age of Ultron, we know he's called himself off from Civil War (Waititi himself directed the #TeamThor shorts) and Ragnarok shows us what has happened in these two years, with a fast-paced start that will soon lead us to the entry of Hela (Cate Blanchett) and the consequent arrival of Thor on Sakaar, where he will be reunited with the green goliath, Hulk (Mark Ruffalo). Between battles and jokes, the thunder will look for a way to stop Hela, at the cost of allying himself with his (adopted) brother Loki again. Thor: Ragnarok also solves what was left unfinished by the predecessor, in one of the funniest moments of the film. Waititi's film runs for one hundred and twenty minutes between laughter and blows, a pleasant episode about two hours long that tries to entertain loudly. Except that once he's finished he leaves a certain bitterness in the mouth.

I try to explain: during the vision there was no lack of successful moments (the arena above all) and laughter of taste, but most of the time they were so out of context as to leave us confused. Fun immediately, followed by a mental "But why?!”Which has been repeated over and over throughout Ragnarok. Fortunately, despite this recurring doubt, the cast works, and so do the brief appearances of Strange (Benedict Cumberbatch) and the part of the Grand Master (Jeff Goldblum) pull some smiles.
Among the new characters, however, it is certainly Hela who stands out, with one Cate Blanchett perfect femme fatale, too powerful for our hero but which unfortunately does not pierce the screen as Keaton and Russel did in 2017. Good performance by Tessa Thompson in the role of Valkyria, a fled Asgardian warrior and Thor's new female shoulder, given the absence of Lady Sif (Jaimie Alexander).

As I said above, Thor: Ragnarok leaves you blown away from the first moments. Certainly in the last two films dedicated to the God of Thunder there were some jokes, but not in the industrial quantity of this third chapter. Which might not be a bad thing if that's what you're looking for, but XNUMX hours away it doesn't leave much more than a few nice memories. A total change of register compared to the first two films, probably due to Taika Waititi and the decidedly more comedy script. The tragic moments are present, but the characters give them little weight (if not to one in particular) and this, thinking of Ragnarok as one of the most mature moments of the paper Thor, raises more than one eyebrow.

But on these pages we know very well that the MCU films with comic plots only share the titles, so we weren't expecting a Norse tragedy at all, but not even such a clear turn on comedy. Disappointed, in fact.

Waititi's film abounds practically everything on offer: laughs, blows, 80s synth pop music and bright colors. With regard to Sakaar's colors, it seems that the whole cosmic side of the MCU is inspired by the feeling of Gunn's Guardians of the Galaxy, trying to drag Thor into the same context as well. But Thor is not Star Lord and so too Waititi is not Gunn, even if it tends to ape it.

Thor: Ragnarok Suffers From One Thing: He Wants To Look Too Much Like The Guardians In The Year Of Guardians 2

The constant references to the Guardians are also noticeable in the soundtrack that abuses Immigrant Song in licensed songs. And once again we are faced with an audio mix job that has nothing to do with the Guardians, but which inevitably remembers them (badly). Fortunately from the visual side Thor: Ragnarok is almost always flawless (except for a location where the Green Screen is clearly visible) and some moments are truly a joy for the eyes for colors and framing. Unfortunately this is not enough to make the film one of the best of its kind.

To learn more:
Guardians of the Galaxy Vol. 2 - James Gunn did it again

Thor: Ragnarok will be another one of those cases where you either like him or hate him, but this time, in my opinion at least, the truth really lies somewhere in between. The third episode on the God of Thunder is a concentrate of events, seasoned with a container of jokes, quotes to other films and an excellent cast (certainly the best part of the film) but when the lights turn on again after the two post-scenes credit if you are a fan of the MCU, you will have seen a pleasant movie and nothing more. A filler towards that nineties piece called Infinity War, a crystal bridge to cross while waiting to go home.

Do you want to be a video game expert and know all the tricks, guides and reviews for your video games ? Holygamerz.com is a group of video game fanatics who want to inform you about the best tricks, guides and tips. We offer you the best information to be a reference in gaming, so here you can find guides, tricks, secrets and tips so you can enjoy your games to the fullest. Are you ready to get all the achievements of that game that you resist so much? Enter now and enjoy your favorite video game to the fullest!
Red Dead Redemption Review ❯

Special E3 2018: the summary of the Sony conference

Avengers: Infinity War Special - The milestone of 10 years of stories