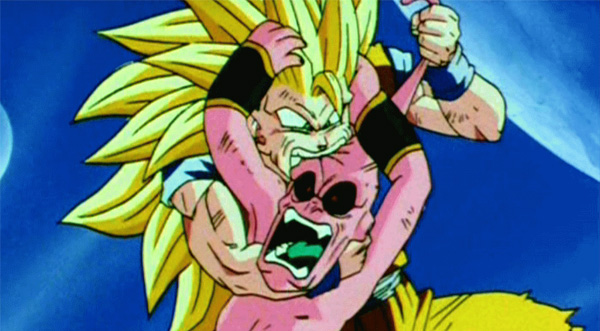 Every journey has an end: that of Dragon Ball Z is full of Power Ups, Fusions and Absorbs.

We left at the end of October with a relentless Majin Buu, still under the game of Babidi, with Vegeta who sacrificed himself in vain and Goku who has a new technique up his sleeve to teach Goten and Trunks. The fifth box set is available on Amazon and in dedicated stores, also distributed by Yamato Video and Koch Media, together with a complete collection of the five volumes published during the year.

Dragon Ball Z Vol. 5 contains episodes 241 to 291, concluding the series with new transformations for Goku, power ups for Gohan and new union techniques. So let's finish our nostalgic journey alongside the Saiyans, with the latest Dragon Ball Z cartridges.

The third level, the fusion and the Z sword

One of the problems of the last volume was certainly the slow pace with which events took place. Problem that can also be found in this series of episodes, at least in the first part. Fortunately, among the very slow episodes in which the plot does not advance, there are also high-level episodes such as the transformation of Goku into a third-level Super Saiyan resulting in an almost equal battle with Majin Buu. Unfortunately, the transformation uses too much energy, and Goku is forced to retire, not before having taken three days from the bad guy (necessary for Goten and Trunks to learn the fusion) and have made him rebel against Babidi.

The Fusion is the great protagonist of this last box set, a move that allows the two users to merge and give life to an extraordinary warrior. During the years, the Dance of Metamor has entered the geek imagination, easily quoted on any occasion, and Gotenks himself has become one of the most beloved characters in the series. Not even this new move is immune, however, to the fillers of Dragon Ball Z, and before we see Gotenks in action seriously we will have to put up with three out of nine discs. Meanwhile, the young Gohan extracts the powerful Sword Z from a rock, a legendary weapon that is said to be able to defeat the fearsome Majin Buu (As usual, we thank that idiot Kaiohshin for not having warned the warriors of the existence of the blade). During training, the sword breaks and Kaiohshin the great comes out, who in exchange for a kiss from Bulma, decides to awaken Gohan's dormant potential in the following hours. The process lasts about twenty episodes, giving Majin Buu time to redeem himself, transform himself, exterminate the whole planet and face Gotenks in one of the most delusional clashes in the series.

Fortunately, Gohan thinks about bringing a bit of seriousness (and braggart), after completing the training, and without becoming Super Saiyan (one of the mistakes of the following series) easily folds the thin version of Buu. Too bad that the young man makes mistakes again, as during the clash with Cell, allowing the demon to absorb both Junior and Gotenks, obtaining new formidable powers.
Kaiohshin the Supreme therefore reveals another fusion technique, obtainable through the special Potara earrings (confirming that it is the Kaiohshin race to be idiot) and making himself useful by bringing Goku back to life, our protagonist however does not arrive in time (as usual ) to join Gohan, who gets absorbed and makes a now relentless Buu even stronger.
The situation therefore seems tragic, but finally we are presented with one of the most beautiful characters born from Toriyama's pencil, the fusion between Goku and Vegeta, probably the strongest warrior in the universe Vegetto.

Too bad that Vegetto's entry into the scene will lead to another of the ugliest fillers in history (never as much as the false Namek) the one inside Majin Buu's body, which will lead to the creation of the final form of the monster, to the destruction of the earth, and at the last battle of Dragon Ball Z.

The Terran better than the Saiyan

But this fifth and final volume of Dragon Ball Z also does justice to Mr. Satan, who proves to all intents and purposes that he is truly the champion of the Earth, not by physical strength, but with his own courage he is able to earn the trust of the Majin Buu Grasso, soon becoming his best friend, then during the finale, Satan is essential for the preparation of the Spherical Energy (Genkidama) necessary to win the battle once and for all.

Satan is the norm that wins over strength, kindness and good deeds that lead to peace more than punches and energy rays.

It is only thanks to him that the Grounders donate their energies to Goku, allowing him to unleash the powerful attack. It is sad that all this is lost in the next two series, binding the character to the gag or the background and returning only to lead his hands in an ignorant way.

If Dragon Ball Z ends with episode 291, with a Goku taking under his wing Uub, the reincarnation of Buu, the story is far from over, and in the coming months we will analyze Dragon Ball GT, although not both canon in waiting to talk about Dragon Ball Super sooner or later.

In any case, as in other events similar to this one, the purchase of the boxes is especially recommended for nostalgics, for those who do not give too much weight to the adaptation or format.

Do you want to be a video game expert and know all the tricks, guides and reviews for your video games ? Holygamerz.com is a group of video game fanatics who want to inform you about the best tricks, guides and tips. We offer you the best information to be a reference in gaming, so here you can find guides, tricks, secrets and tips so you can enjoy your games to the fullest. Are you ready to get all the achievements of that game that you resist so much? Enter now and enjoy your favorite video game to the fullest!
News Ghost Recon: Breakpoint: closed beta available from 5th to 8th September ❯

Assassin's Creed special, in what order to recover the saga

Special Could the price of video games increase? You did not understand anything ...

Add a comment from Special Dragon Ball Z Vol. 5 - Satan is our savior