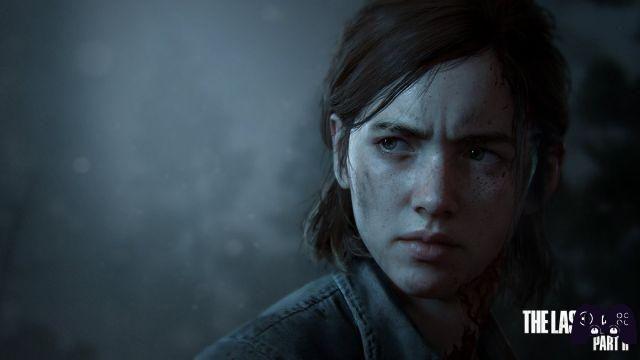 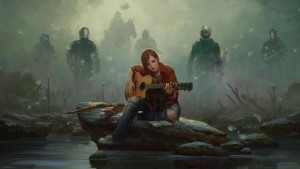 To learn more:
The Last of Us Part 2 between politics and reviews

While it cannot be said that The Last of Us: Part II is the longest-running game in the world, it still features a good amount of collectibles and items scattered across the map that will give the player a greater incentive to explore every map that comes across.

Today we will talk about one of these categories of objects, that is the safes, specifying both where to find them and how to open them.

For a full plot summary of The Last of Us Part 2, the videogame incorrect rece of Holygamerz is online.

All safes and combinations

To learn more:
The Last of Us Part 2 - Where to find all weapons and holsters

There will be a total of 14 safes, plus a 15th combination that we will need to open the changing rooms in the Seattle tunnel.

Finding them all will allow you to take the “The art of burglary” trophy, as well as giving you various useful items during the gameplay sequences.

The list below will be divided according to the various chapters of the game in which you can find one or more, so in case you want to avoid even minimal spoilers regarding some events of the plot, we advise you to stop here.

In the introductory chapter Jackson will feature only one safe, which can be found in the Jackson supermarket next to the artifact Good boy combo.

To guess the combination, first you have to enter the supermarket and, through an opening in a wall, find the blackboard with the employees of the month.

At this point, go right and enter the room with the metal door, where you will find the aforementioned artifact.

The latter will give us an important clue to find the combination, since it will speak of a dog that will have taken the "employee of the month" award. 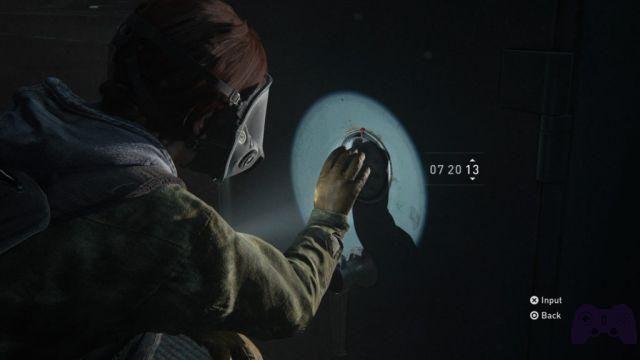 07 20 13 it will be the password that we will have to enter to open the safe, located in the room preceding the one with the blackboard.

Being the chapter with the most expanded map in the game, it is no surprise that we will have to research not one, but three safes throughout the area.

La before will be placed in the Westlake Bank, and it will be nothing more than the vault itself of the building.

To find it and open it, just clear the Clickers area, and then look for the Bank Heist Plans artifact inside a bag.


Thanks to it, you will not only find a complete plan of the bank with the location of the vault well specified, but also the combination to open the latter, that is 60 23 06. 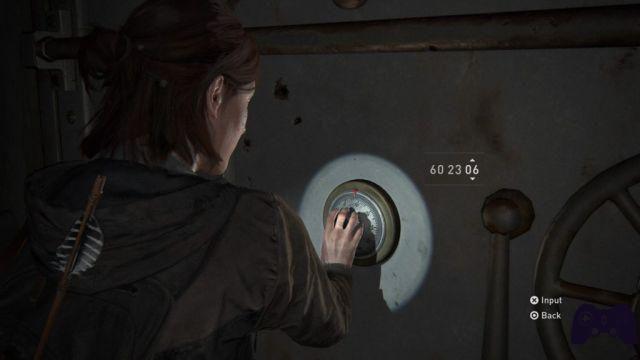 for secondinstead, you will need to go to Checkpoint Gate West 2, near the Valiant Music Shop on Madison Street.

Enter the revolving door and look to the left of the room. Near some shelves, you will find the safe.

For the combination, however, you will have to use the same one you used to open the second west gate, obtainable through the artifact Checkpoint Gate Codes inside a cabin positioned near the gate itself (04 51). You will also find other useful codes, shown in the image to continue during the chapter. 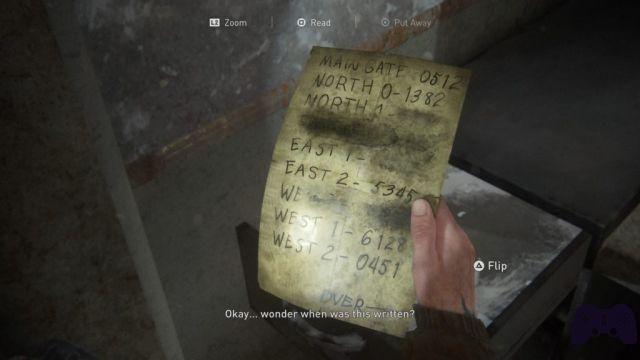 As for the third and last, however, you will have to go to the court and, after the battle against the infected, head to the floor below.

The combination, on the other hand, will be well marked on a blackboard next to a skeleton of a FEDRA soldier, which can be found by breaking a window near the area with the safety barriers and passing through it (86 07 22). 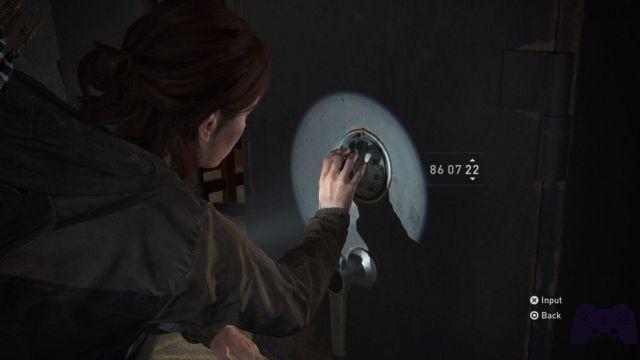 The only safe that can be found in this section will be located in the Wellwishes thrift store, reachable shortly after we find Tommy's dead horse in front of the Martial Arts Center. 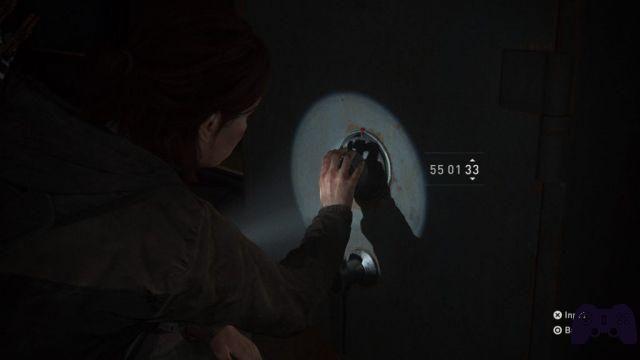 Enter the shop, head right and look at a chalkboard. Hanging between the various cards will be an artifact called Thrift Store Reminder, in which, among the various information, the combination of the safe will also be marked (55 01 33), reachable at this point at the bottom of the building.

There will be no safes in the tunnel, but you will still have to look for a combination to gain access to the employee locker room.

To do this, head into the room with a coffee table and vending machine, then grab a can from the vending machine. On it you will find the code to open the locker room door, although you will still have to guess the last two digits (the complete code is 15243).

In the second area that you will arrive in after the chapter begins, behind the Shear Lux salon, you will find a garage surrounded by a fence with a garbage can in front.

By moving the latter you will be attacked by Clickers, so we advise you to prepare yourself properly by placing traps to put them out of action immediately. 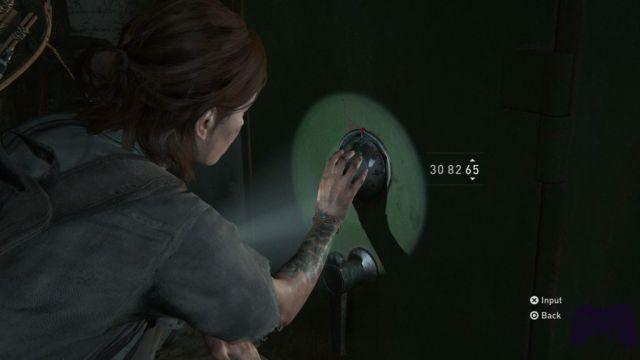 As soon as the danger has passed, just enter to find the safe of this level.

Its combination will be found in the shop in front of the Shear Lux salon and at the tattoo parlor, through the artifact Dale's combo (it's a note attached to the wall, the combination is 30 82 65).

In this part of the third chapter you will find two safes.

The first will be located after the section with several offices and the words “Feel Her Love”, in an apartment opposite the 24 Hour Access Gate.

To get in, you'll need to get into a van opposite and break the window. The safe will be placed in the bedroom closet, while the artifact Last Letter to Husband with a clue about the combination it will be on a table near a cup at the entrance (it will speak of the 30th wedding anniversary, the date will be guessed by observing the calendar in the bedroom, 10 08 83).

The second will instead be found in the Weston Pharmacy, immediately after the section where you will fall into the pool. Behind the counter at the entrance you will find the artifact Pharmacy Notes with the combination (38 55 23), while to the right of the same balcony you will find a crack from which you can access the safe. 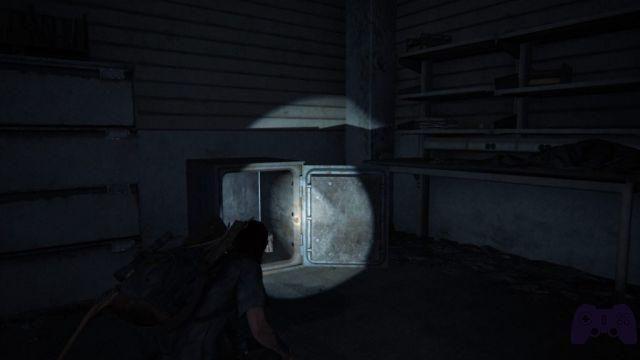 From this chapter on, you will only need to find one safe per chapter.

Arrived in front of a gate locked, go right and reach a locked door, through which you can immediately see the location of the safe.

To reach it, go left and up the stairs, entering a room with a corpse and an artifact (Stash Note) that will reveal the combination you need (70 12 64). 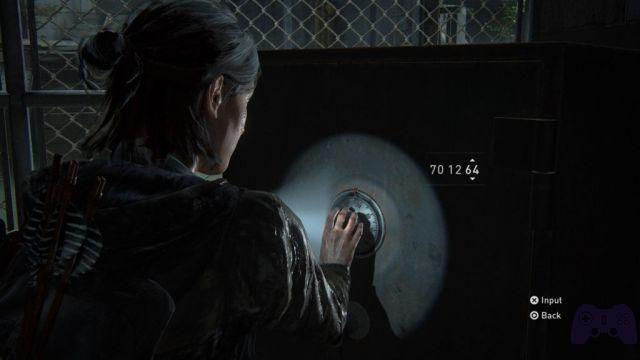 The safe can be reached by moving a trolley next to the corpse and passing through the crack in the wall behind it.

Start the game with Abby, shortly after reuniting with Manny, you will reach an area with a camper, inside which you will find the artifact WLF Gun Cache Note. 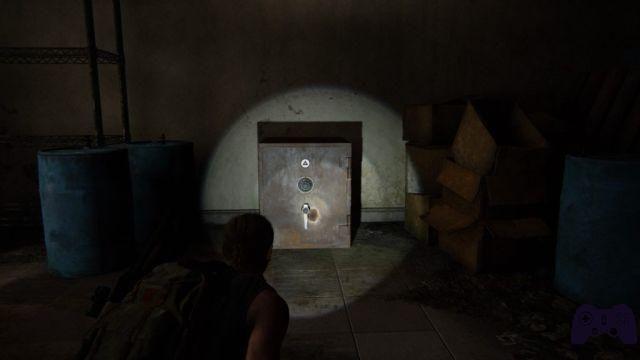 The safe in which the combination must be entered will be located in the MS Corporation Soft Drink Distribution Center in front of the camper, accessible only through a crack in the wall to its left.

In the chapter "Hostile Territory" you will arrive at a certain point in the Chinatown area, in which the building will be present Jasmine Bakery.

The safe will be positioned in the opposite direction from the entrance, while the combination (68 96 89) will be reachable by entering the Red Dragon Bar on the same road and reaching the building opposite with a running jump. 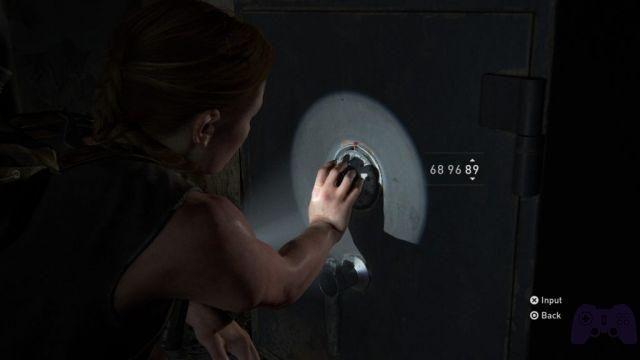 The artifact that brings it back (Jasmine Bakery Safe) will be preceded by a handful of Clickers, so be careful before entering.

During this chapter, you will find yourself at some point entering the interior of a destroyed ship.

The artifact with the combination, called Mutiny Notes, it will be on top of a bed shortly after you find the crossbow. 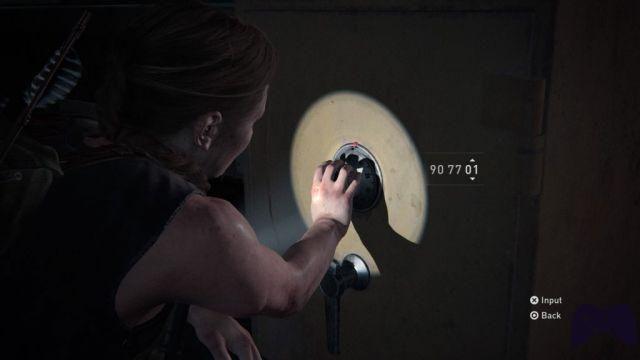 As for the safe, however, continue in the ship and reach the weapons depot. You will find the safe by turning left from the stairs, open it using the combination 90 77 01.

The safe in the chapter “The shortcut” will be placed in the bedroom of an apartment reachable shortly after crossing the section with the rapids. 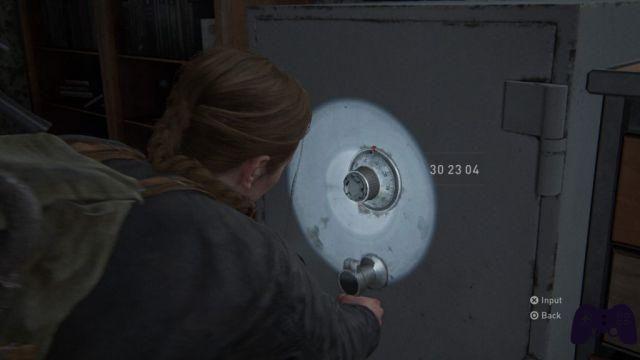 The combination will be found by combining the number of the apartment we will have entered with that of the neighboring apartment (302 e 304), as suggested by the artifact Neighbor Exchange positioned in the opposite direction from the entrance.

At the beginning of the chapter "The descent" you can enter a gym.

Instead of doing it right away, however, you will need to stop before going through the door at the end of the stairs and looking further back for theOrchard's Juice Bar .

Inside, you can find the artifact Gym Safe Combo, which will let you know that the combination of the safe is identical to the hotel's Wi-Fi password (easily found behind the balcony at the entrance to the gym, 12 18 79). 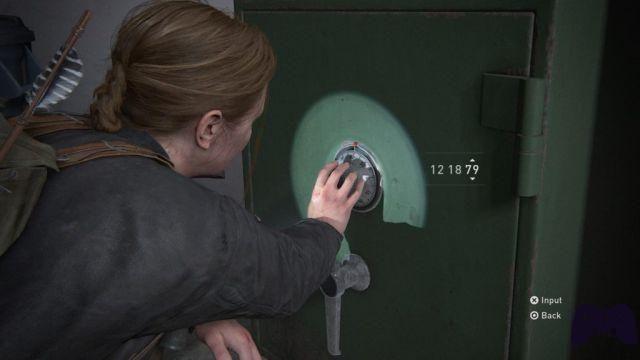 The last safe of the game will then be waiting for you inside a cloakroom near the stairs at the entrance.

Do you want to be a video game expert and know all the tricks, guides and reviews for your video games ? Holygamerz.com is a group of video game fanatics who want to inform you about the best tricks, guides and tips. We offer you the best information to be a reference in gaming, so here you can find guides, tricks, secrets and tips so you can enjoy your games to the fullest. Are you ready to get all the achievements of that game that you resist so much? Enter now and enjoy your favorite video game to the fullest!
BioShock Infinite Review ❯

Guides How to catch Shiny Celebi in Pokémon GO [Guide]

Add a comment from Guide The Last of Us: Part II - Guide to safes and combinations