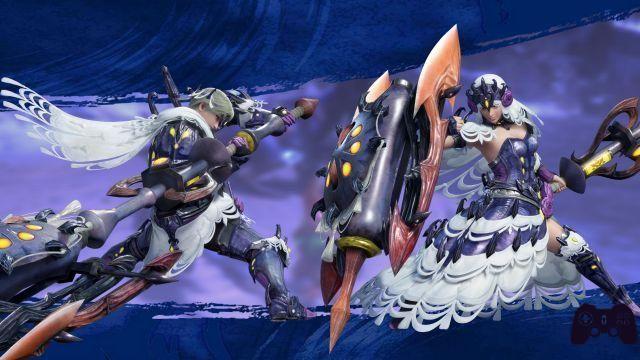 With the beginning of your experience on Monster Hunter Rise you will immediately have to make a very important choice, which is to understand which weapon you will want to use for the next hours of gameplay. In all there will be 14 different classes at your disposal, each with its strengths, weaknesses and particularities in general.

In this guide, in particular, we will talk about the Loaded Blade, specifying their various basic moves, combos, silkworm attacks and trading skills, along with some general tips on how to use them.

Furthermore, if the guide is not enough for you and you want the weapon in action, I refer you directly to Edivad video tutorial, one of the contributors from the facebook page La Taverna del Cacciatore:

La Loaded Blade it is one of the most difficult weapons to master, but also the one that could give you great satisfaction. Similarly to the Spadascia, it will have two modes, that one Sword is that Ax, although in this case the first will have a shield together and the second will be a double ax.

In Sword mode the weapon is similar to the Sword and Shield, also allowing you to parry the attacks of monsters. This mode is mainly used to charge energy, which is stored in the vials of the shield. Once you have accumulated enough energy you can drain it to release powerful explosive attacks in Ax mode.
The Ax mode should be remembered that it is undoubtedly slower than the Sword, at the expense of the great offensive power.

Also the Loaded Blade can have 2 different Silkweave Attacks from the beginning, both with different cost and use. 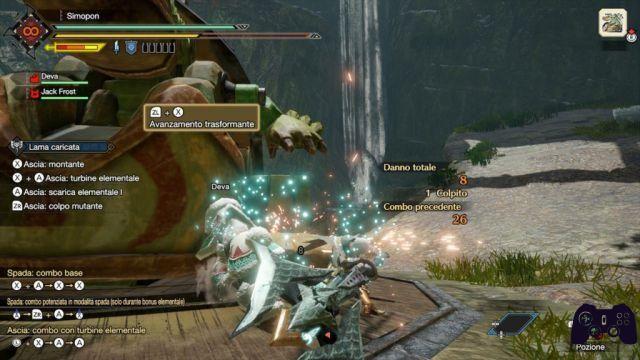 A silkworm attack that can be activated with ZL e X. Throw it forward with a wire bug and yours loaded blade becomes an ax. While executing you will dodge any damage that comes to you, and it will require a single silkworm charge.

Counter-echo of the peaks (ZL + A) 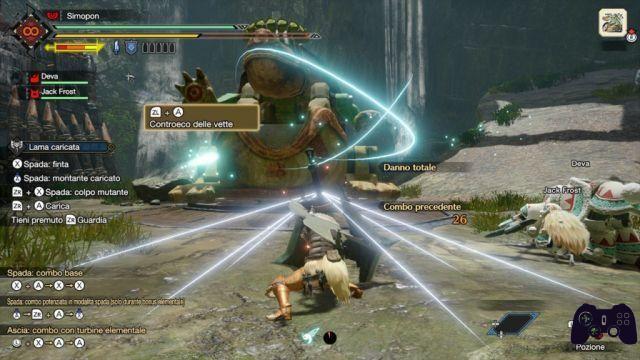 A silkworm attack that can be activated with ZL e A. If you take a hit while preparing the weapon, your bottles will come filled to the maximum. It will require the use of a silkworm charge, and by taking a hit you can immediately charge the sword by pressing X or perform an Elemental Whirlwind / Elemental Storm by pressing X + A.

As with any weapon category, the Loaded Blade will be able to make use of Exchange skill, or interchangeable attacks that you will unlock with specific missions after you have used it enough.

Two of these will go to replace basic attacks, while one can replace an Attack with silk silk. However, keep in mind that each can only substitute for some specific attacks, modifying the resulting move but keeping the buttons to press to perform it identical.

It can be done with X + A. A transforming attack that focuses on defense, with a prolonged blocking effect. The weapon can block attacks both when it is changing into Ax and Sword. If an attack is successfully parried, the damage of the next elemental whirlwind comes increased.

Activate Element Regeneration while charging. The shield starts spinning as if it were a saw. This technique transforms the weapon into Ax Mode, allowing it to strike multiple times while it is active. Prolonged hits in Ax Mode turn energy into vials.

It can be activated with ZL e A. High slash with the ax with recoil and iron silk to catapult the hunter into the air. As you go up, you can throw one powerful elemental charge.

Do you want to be a video game expert and know all the tricks, guides and reviews for your video games ? Holygamerz.com is a group of video game fanatics who want to inform you about the best tricks, guides and tips. We offer you the best information to be a reference in gaming, so here you can find guides, tricks, secrets and tips so you can enjoy your games to the fullest. Are you ready to get all the achievements of that game that you resist so much? Enter now and enjoy your favorite video game to the fullest!
News Star Wars Jedi: Fallen Order - Official Trailer Released ❯

Fortnite Season 4 Week 3: all the challenges and guides

Anthem, Guide to the Javelin