Astral Chain: how to beat the first boss: Briareos

In this guide we will see which techniques to use to defeat Briareos, the first boss in Astral Chain

Released on August 30th only on Nintendo Switch, Astral Chain is the new action title from PlatinumGames. At the head of this new video game there are people who have worked on the development of games of a certain depth, such as Devil May Cry and NIER: Automata, so not really the latest additions to the industry. In the new game released by Nintendo we have different bosses to face, and the first of these is Briareos, but let's see which technique to adopt.

Astral Chain: how to beat the first boss: Briareos | Guide

In Astral Chain there are, as we have already mentioned, several bosses, which are called chimeras. The first chimera we will face in Astral Chain is Briareos, a sort of gigantic gorilla. Yes, this is the classic boss who uses the brute force as the fulcrum of his being and which, therefore, is very slow. The beast has various attacks at its disposal which, for the most part, result in real blows towards us or towards the ground, in order to unleash strong shock waves.

The best techniques against Briareos

The best technique for attacking Briareos without taking damage is attack it from behind. Although very slow in most attacks, the ape often moves quickly, making it less easy to keep up with. When you are behind him you will have to use the melee weapon as much as possible instead of the gun, so as to inflict as much damage on him as you can.

When Briareos turns to attack you directly, be sure to make the most of dodgingby pressing the “B” key. Once you dodge him or roll between his paws, you can continue attacking him from behind. While most of its attacks are easy to avoid, shockwave ones are not at all and will cause you to lose life very often.


During the fight, some officers are influenced by Red Matter and they will attack you. When that happens, just walk away from the boss for a few moments, easily defeat them and return to attack him. This is the first, but he is by no means one of the more complicated bosses to beat in Astral Chain. The keys to fighting combat are dodging and attacking from behind, so using this tactic you should be able to beat him with ease. 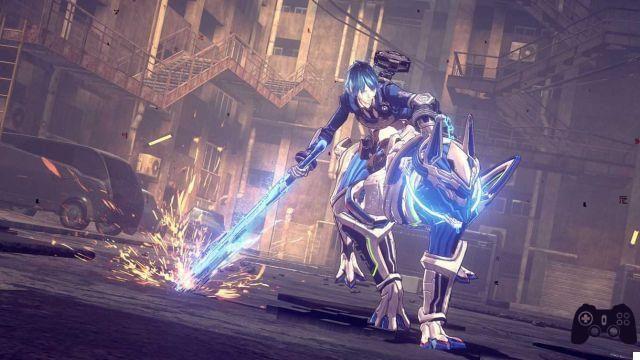 The guide is over

This was our guide on how to beat Briareos, the first boss of Astral Chain. On our site there is the guide on like playing co-op with a friend, to read it click here.

For other guides, news, specials and everything related to the gaming world, keep following Holygamerz!

Do you want to be a video game expert and know all the tricks, guides and reviews for your video games ? Holygamerz.com is a group of video game fanatics who want to inform you about the best tricks, guides and tips. We offer you the best information to be a reference in gaming, so here you can find guides, tricks, secrets and tips so you can enjoy your games to the fullest. Are you ready to get all the achievements of that game that you resist so much? Enter now and enjoy your favorite video game to the fullest!
Astral Chain: how to beat the second boss: Enceladus ❯

Mortal Shell Guide - Guide to all trophies and Platinum [100%]

Resident Evil 2 Remake: where to find all weapon components | Guide

Wolfenstein: Youngblood, how to use the Buddy Pass | Guide

Add a comment from Astral Chain: how to beat the first boss: Briareos