Let's discover together the new weapons of Wolfenstein II: The New Colossus! In this small guide we see a preview of the available armament, with their description and use. Among the most interesting are the ax and the Schockhammer, ma the variety of the arsenal will certainly entertain all players, as well as appreciate the title more

A tough battle awaits B.J. Blazkowicz in Wolfenstein II: The New Colossus. The Nazi forces have subjugated his country and BJ must travel across America to assemble a group of rebels and push back the invading regime. But he will not launch into the fray unarmed, being able to count on a arsenal of powerful firearms, grenades and various objects that will allow him to force his way through the evil occupants.

Developers MachineGames however, they did not limit themselves to supplying BJ with a varied arsenal of excellent firearms: in addition to brand new weapons, Wolfenstein II in fact provides for the possibility of freely use two weapons at the same time and customize weapons with a number of changes. But even with these upgrades it won't be easy for BJ to free his country and save the world from evil.

To help you, we have decided to compile this complete guide to paraphernalia available to BJ, to make America a Nazi-free place again. We have also included some comments on the brand new weapon customization system present in the game. 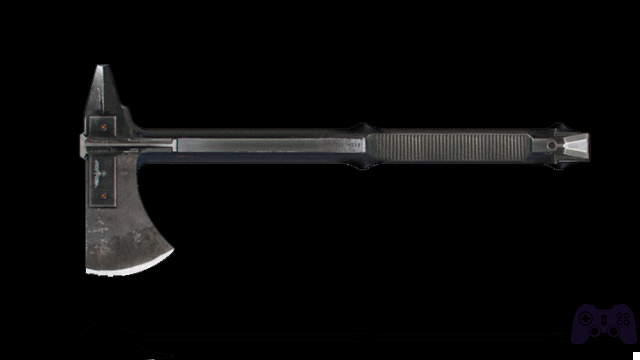 In the hands of Blazkowicz, accept it it can have two functions. First of all it can smash the supply crates and other obstacles, that is, to do exactly what it was designed for: a tool for firefighting operations. However, BJ is engaged in an anti-Nazi operation and for this reason he also uses this edged weapon for kill silently ... or brutally.

During The New Colossus, from time to time BJ will come across entire stocks of hatchets. These extra hatchets can act as silent but lethal throwing weapons with which to take down unsuspecting Nazis from afar… or have the last word in a gunfight if the shippers cry misery. Finally, hatchets uprooted from the corpses of fallen enemies are reusable, rewarding BJ's throwing prowess with at least one more free opportunity to take down another Nazi. 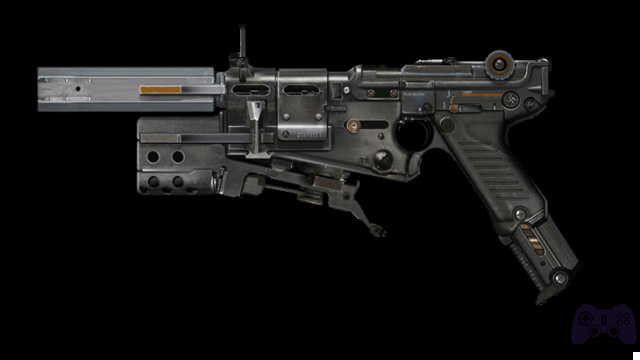 Easy to use (and even easier to keep charged, as dead Nazi commanders leave ammo on the ground in large quantities), the gun is a reliable secondary weapon suitable for close range fights. Despite its humble appearance, especially when compared to the larger guns in BJ's arsenal, the pistol is capable of get rid of easily of all non-armored enemies with just a few well-placed shots. Its efficiency increases with upgrades: Extended charger (more hits) e Magnum (more damage).

When it comes to saving ammo (or just taking unsuspecting enemies by surprise), in Wolfenstein II: The New Colossus there are few better solutions than a silenced pistol. With the upgrade Silencer, the pistol becomes practically an essential tool for stealth assaults, with which to eliminate Nazis from a distance without triggering alarms. 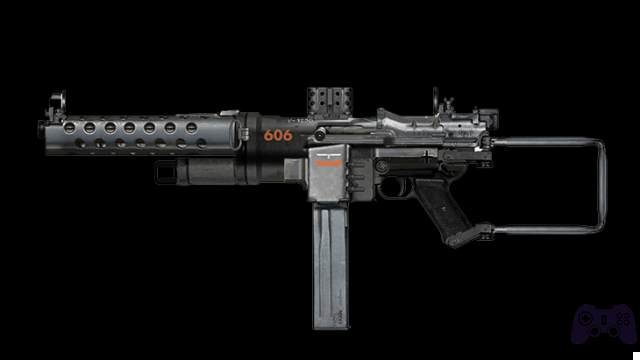 Sometimes, in firefights, efficiency cannot be based on the concept of “one shot, one life” but must refer to that of “shoot as much as you can”. In these cases, BJ has the Submachine gun, a light machine gun fromimpressive rate of fire. Few weapons can clear a room as quickly as a Maschinenpistole (or two) in BJ's hand

Like the gun, the Submachine gun can be equipped with the upgrade Integral silencer to perform stealth kills. However, if BJ does not want to have such problems, he can always resort to strengthening Sparachiodi, that is an overheated barrel that fires incandescent bullets to make every single shot even more ... burning for the enemy! 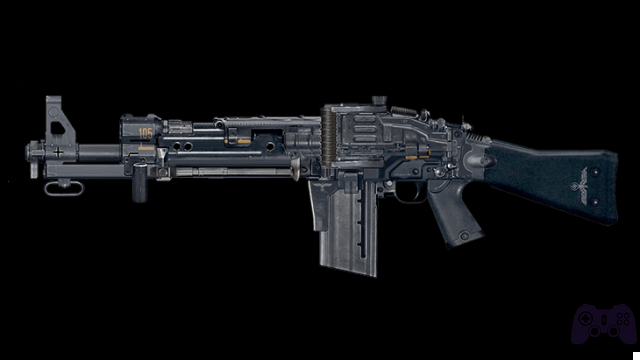 Normally used by the Nazi elite, this one automatic rifle comes in handy for neutralizing enemies just beyond the firing range of weapons that work best at close range. Add the upgrades Armor-piercing ammunition e Jungle cartridges, and this high-caliber rifle will be particularly effective against toughest enemies and in ranged combat.

Distance won't be a problem.

When the distance between BJ and the enemy is considerable, the Precision sight. Once this beautiful viewfinder is activated, the Sturmgewehr becomes a semi-automatic shotgun, more powerful and accurate.

Schockhammer: Like a shotgun, but three times more powerful 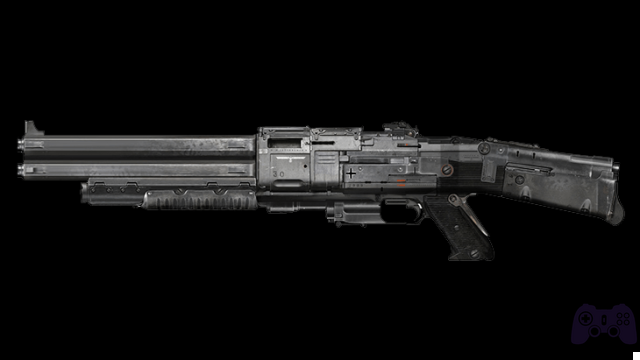 Very… Wolfensteinian shotgun. The Shock hammer literally adds an unexpected twist to the shotgun concept. Gifted not with one, not with two, but with ben three rotating rods which unload lead automatically, when a barrage fire with great stopping power, the Schockhammer is BJ's weapon of choice

The enhancement Rebound allows the shots of the Schockhammer to bounce off hard surfaces, allowing BJ to take out enemies hiding behind corners or cover, or trapped in confined spaces, in what could only be described as a "Snooker-billiard shot".

Kampfpistole: a rocket launcher from another world 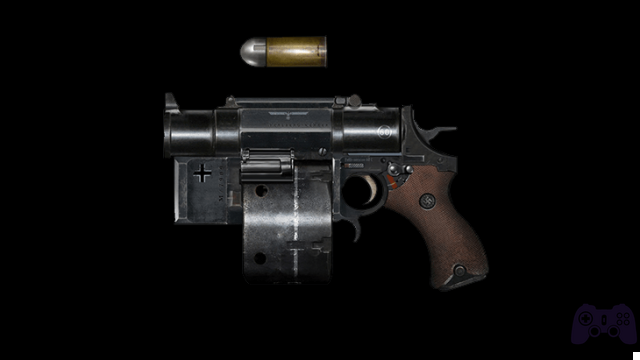 La Combat pistol represents the version of Wolfenstein II: The New Colossus of the concept “it may be small, but it can hurt you very, very badly”. Despite its small size, in fact, the Kampfpistole is very serious, being essentially a grenade launcher disguised as a gun. A single hit is capable of blasting an entire squad of Nazi soldiers (or rather, what is left of them) in all directions.

Although the Combat pistol normally you throw his projectiles in an arc trajectory, BJ can choose to fire at I raise zero with the upgrade Rocket: When activated, the shots fired from this powerful weapon will cross the air in a straight line, as if BJ were holding a single-handed missile launcher. With this upgrade, in addition, the bullets explode on impact, allowing BJ to immediately enjoy the final pyrotechnic guaranteed by the exploded Nazis.

Laserkraftwerk: it is not just for cutting grates 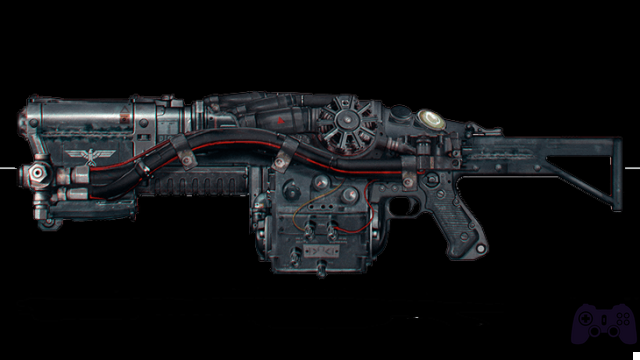 Bombs and bullets are fine, but there is something extremely satisfying about vaping a Nazi that is hard to put into words. While we try, BJ can do it by pulling the trigger on the Laser power plant, already seen in Wolfenstein: The New Order. Available in the history of Fergus (ie if you choose Fergus over Wyatt), with his darts of pure supercharged energy, the Laserkraftwerk can pulverize even the toughest armor.

As hard as it is to believe, the power output of the Laser power plant it can be further increased with an upgrade. Once modified with SuperchargeIn fact, BJ just needs to hold the trigger to charge and then release a very powerful energy beam. The important thing is that BJ remembers not to hold the trigger for too long, or the gun's electric battery could run out. 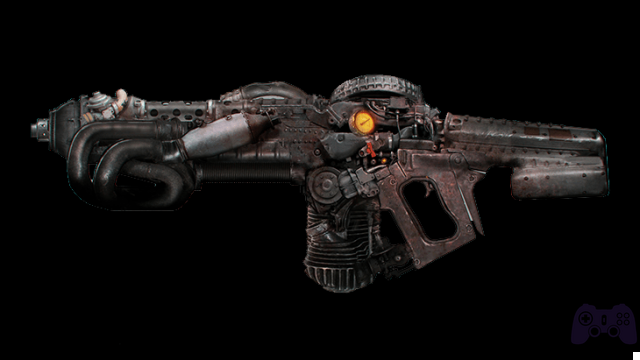 If you choose Wyatt's chronology instead of Fergus's, you can rely on the Diesel power plant. This weapon that aims not so much to vaporize the Nazis with precision, but to combustion: With its remotely detonated charges filled with fuel, you can make Nazis fall into intricate traps, or simply attack them with a charge to be detonated on command. Any form of spectacular destruction is welcome.

As effective (and fun as it is) to set traps, there are times when BJ doesn't have time to wait for the Nazis to bite into his traps. Once the upgrade is unlocked Incendiary mouth, BJ will be able to set fire to the charges of the Dieselkraftwerk immediately, effectively transforming this delayed detonation weapon into a grenade launcher ready to rain napalm on enemies in an instant. 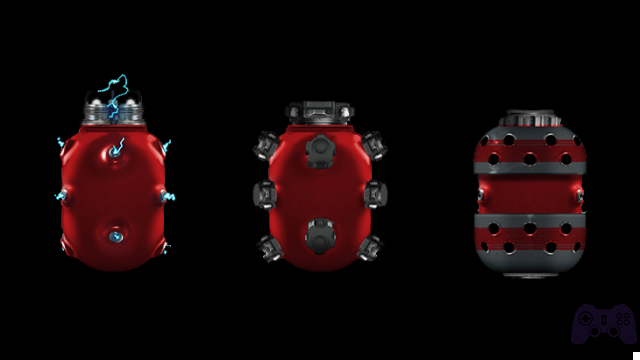 Deadly enemy of enemies locked in tight spaces, in large or very slow groups, the Hand grenade that's what it takes to give any fight that little bit more. By throwing it in the right place at the right time, BJ can clean up an entire room full of Nazis in one fell swoop. That said, the real fun begins as soon as you start using the upgrade kits ...

While not a conventional firearm, BJ can equip the Hand grenade with upgrades that make it even more lethal. With the upgrade Splinters, for example, which makes it a fragmentation weapon, with which BJ can tear the Nazis to shreds. The enhancement OilInstead, it ignites the surrounding air while boosting EMP launches an impulse capable of neutralizing any electronic device. And yes, BJ can also activate all three power ups at the same time, transforming each Handgranate into an EMP fragmentation incendiary grenade! 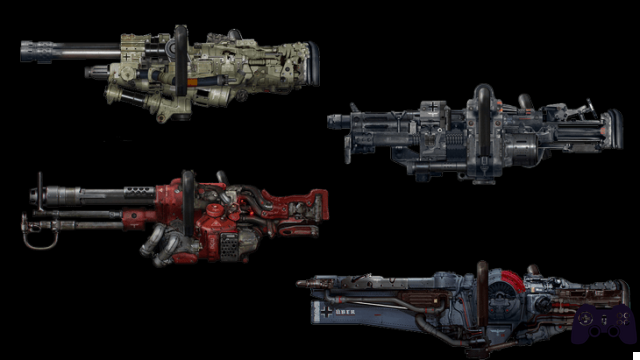 Carried to the battlefield by the menacing SuperSoldaten of The New Colossus, these powerful military tools they add another ace to Blazkowicz's deck of anti-Nazi killing techniques… as long as he stole them from the super-gorillas they have in their possession, by eliminating them.

While too bulky to fit into BJ's inventory or to use two at a time, these two-handed weapons are unmatched in terms of power. Among them are the lasergewhr, able to melt metals and Nazis alike, the very fast and incandescent Diesel rifle andHammer rifle, which somehow manages to outdo even the Schockhammer with its four (yes, four!) rapid-fire barrels.

One weapon to dominate them all.

Those looking for the best in terms of Nazi disinfestation cannot fail to crave the use ofOver rifle, the incredible encounter between devastating firepower, the combustibility of diesel and the energy of a laser concentrated in a single beam for assured carnage.

Like any respectable Nazi-killer, BJ is also tempted to experience the extraordinary power ofOver rifle but, to do so, he must first eliminate the unità destroyer which are equipped with it (in double copy, moreover). Sure, the feat isn't easy, but hey! That's exactly why BJ has all those other weapons at his disposal!

Wolfenstein II: The New Colossus, are you ready for this new adventure? Take up arms!

Please note that  Wolfenstein II: The New Colossus will be published on October 27, 2017 to Xbox One, PlayStation 4 e PC, with the version for Nintendo Switch scheduled for 2018.

Winner of over 100 awards at E3 2017, Wolfenstein II: The New Colossus earned four nominations for the E3 Game Critics Awards (including "Best of Show") and won the award as "Best Action Game".

Wolfenstein: Youngblood, how to unlock doors with keypad | Guide ❯

Marvel's Avengers: how to overcome the Harm Challenges