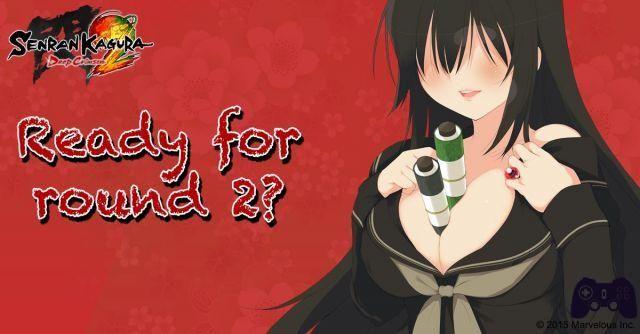 It's been a little over a year since Senran Kagura's series made its official Western debut with the first 3DS title, Senran Kagura Burst, and after a couple of spin offs for PS Vita, including musou Shinovi Versus and the curious rhythmic / culinary experiment Bon appetite, the time has finally come for the first official sequel, again on 3DS, titled Senran Kagura 2: Deep Crimson. Let's go immediately to find out if even this time under an apparently superficial and fanservice aspect there is a title that should not be underestimated.

But aren't they a bit bulky for a ninja?

For those unfamiliar with the series yet, Senran Kagura puts us in the shoes of a group of 10 Ninja girls, divided between the students of Hanzo Academy and those of Hebijo, respectively "good" and "bad" Shinobi. The main and most obvious aesthetic feature is the emphasis given to their female bodies, especially the big, wobbly breasts, put on display by clothes and uniforms that will be destroyed in the course of the fighting, leaving the various girls literally in their underwear. Senran Kagura 2 is, like its predecessors, a game entirely based on the fanservice: a weak plot will be the only excuse to unleash once again a thousand ninja fights, which will result in undressing the girls and revealing their graces. The game opens with an introductory chapter, which traces the final arc of the previous Senran Kagura Burst, in which the two rival schools finally joined forces to stop Orochi's threat, fearsome and destructive Yoma. We will then discover the hand of Dogen, the evil head of Hebijo Academy, behind the crisis of the previous episode and we will have to thwart a new evil plan, which will lead to an attack by Yoma in the city of Kyoto. Once again we are faced with a real pretext to kick off the action e to interest the player will be more the personal stories of the various girls than the underlying plot. The relationships within the two Ninja teams, of friendship and rivalry, are in fact quite complex and will develop hand in hand with the progress of the story. Of course, these are obviously excuses to allow clashes not only against demons but also between the various girls, both between one team and another and within the same team, but it is certainly easier to become passionate about the human parables of the protagonists. than to the mediocre background texture.

Two is better than one… AH NO

Compared to the first episode there are some substantial changes in terms of gameplay. In fact, it goes from a real scrolling fighting game to a hack 'n slash with full movement in three dimensions. The same basic concepts remain, namely the presence of two buttons for combos, one for weak attacks and one for strong, the possibility of "transforming" the girls into their version with battle uniforms or to "explode" their clothes by increasing the maximum attack at the expense of defense. There will also be special attacks, capable of destroying the uniforms of the opponents, exposing their underwear. An effect not only aesthetic, but which will also reduce the defensive capacity of the enemy. Instead, the parry button disappears, replaced by one for running and sprinting towards the enemy, as he comes introduced the possibility to face the missions in duo, with a button to tag and possibly extend the combos to infinity. While the basic feeling of the game remains substantially unchanged, these small innovations have not entirely positive effects on the gameplay. Net of its perhaps excessive simplicity, Senran Kagura Burst was a game with consolidated and very functional mechanics. In the sequel, something doesn't work as it should: free movement in three dimensions pays off difficult to target opponents, despite the basic lock-on system, and will often happen to waste the various specials, throwing them empty. The absence of a button for the parry considerably complicates things, forcing the player to an inelegant "ballet" of jumps and sprints to avoid the attacks of the most powerful enemies, while an improperly calibrated progression of the difficulty level creates several headaches . The game has an RPG-style character growth system, but thanks to the difficulty of having to manage 10 different protagonists, this is not well calibrated. Soon the difficulty level will start to increase much faster than our girls can level up, delivering opponents with disproportionate amounts of energy and devastating specials in the second half of the game. The only solution to not waste hours grinding experience will be to exploit the inherent weaknesses of the combat system, and instead of playing as you should adopt tactics and "means" such as obsessively repeating jump-crashing to the ground and other moves that paralyze the enemy. . However, some news are positive. The girls' move park has been partially revised, and now their combo trees appear more diverse than the prequel and less dependent on button mashing. Likewise the arenas are more compact, and no longer endless corridors populated by waves of enemies that are always the same. The variety of situations is still limited and we are always faced with a highly repetitive title, but in less quantity than Senran Kagura Burst.

Accessory modes like that return from the prequel dress-up and the one that allows you to take pictures of our paladins, yet another proof of the focus on the fanservice of the title, while we welcome Yoma's Nest, a survival mode with consecutive waves of enemies with no chance to recover energy between one fight and another. In this mode, you will also be able to obtain alternative weapons and equipment. Both the Yoma's Nest and the story missions can also be faced with a friend, both in local and online multiplayer. In the course of our test we found some connectivity issues, with connection errors and difficulties in detecting rooms created by other players. Once you have entered the game, fortunately, everything goes smoothly, with great fluidity and absence of lag: on balance, the game experience is completely similar to that of the single player campaign. We point out that there is, even if not yet active at the moment, the possibility of downloading DLC ​​with additional characters and missions. In this regard, all players who present on their 3DS a save of Senran Kagura Burst will be able, at the time of the game launch, to download an extra character for free, for a fee for all other users.

From a graphical point of view, Senran Kagura 2 has made the most progress. The 3D effect, available in the prequel only during filmed scenes, this time can also be activated during gameplay and is of excellent workmanship. The fluidity, another thorny point of Burst, has been significantly improved, and the drops in framerate are now very sporadic and of slight entity. The polygonal models of the protagonists themselves have significantly improved, with particular attention to their physique, even more slender and breasts if possible even bigger. If it is true that in this case the forms presented are completely unrealistic (especially if you think that they are high school students!) And that their physics is completely invented, with bouncing so exaggerated that it makes the Dead or Alive series seem demure, it is also true that the moving effect is very pleasant and goes well with the anime look of the title. The ninja / rock-style music of the first episode is back, with some familiar themes and others completely new. Particularly good and exciting are the background themes to some boss fights and topical duels of the title, while the Japanese dubbing is of excellent workmanship, made with the help of some of the most familiar voices to anime fans. The adaptation of the texts on the screen is as for the first episode only in English and is of an excellent level, managing to replicate the numerous puns (centered on tits, of course) of the Japanese version.

Verdict 7/10 More of the Boobs Comment Senran Kagura 2 is a title that attempts to broaden and expand the gameplay of its predecessor, but in doing so it makes a capital mistake. Despite its excessive simplicity and repetitiveness, the previous episode had in fact unexpectedly solid foundations for being a "all boobs and no brains" game. Here that simplicity and solidity vanish on the altar of "innovations" such as movement in three dimensions and couple battles: the result is smokier, less clear and satisfying. Too often it happens that we have to resort to squalid tactics to overcome clashes with poorly calibrated difficulty. And too often there is excessive frustration due to missed shots and wasted opportunities. A pity, because other news, such as multiplayer (when it works) and the remarkable graphic update are absolutely welcome. Clearly, if you play Senran Kagura just for the boobs you won't give a damn, but if, like me, you were pleasantly surprised by the previous episode, Senran Kagura 2 can only be a partial disappointment. Pros and cons ✓ More varied than the predecessor
✓ Good presentation
✓ Tits!
✓ The addition of multiplayer is welcome x Movement in three dimensions complicates the gameplay
x Character progression not related to difficulty
x Some connection problems in multiplayer
x The "Japanese" attitude and fanservice makes it a niche product
Do you want to be a video game expert and know all the tricks, guides and reviews for your video games ? Holygamerz.com is a group of video game fanatics who want to inform you about the best tricks, guides and tips. We offer you the best information to be a reference in gaming, so here you can find guides, tricks, secrets and tips so you can enjoy your games to the fullest. Are you ready to get all the achievements of that game that you resist so much? Enter now and enjoy your favorite video game to the fullest!
Guides How to Play with Friends Online and Local - Animal Crossing: New Horizons ❯