In Sekiro: Shadows Die Twice, NPCs can suffer from Dragon's Sick, a terrible disease. In this guide we will explain how it is unlocked and how it can be cured!

Sekiro: Shadows Die Twice is the brand new action game from From Software released 22 March su 4 PlayStation, Xbox One and PC. Among the obvious features of the title there is also the great difficulty: Sekiro is a really challenging game, and you will very often die and resurrect. But dying is not a sufficient punishment.

The curse - Sekiro, how to cure Dragon's sickness | Guide

Your "failures" will cause the spread of Dragonfly, a disease that it will hit the NPCs of the game world. In fact, every time the protagonist comes back to life, he will steal the health and life force of the characters around him! Illness will prevent you from talking to them and getting information or missions; furthermore, it will lower the possibility of receiving Divine Help.

It may not seem that bad, but in reality it is imperative to prevent Dragon's Sick from affecting too many of Sekiro's non-player characters. The Divine Aids, indeed, prevent a Lupo to lose half of the Sen (money) and skill points when you die. Divine Aids can also come when Dragon's Sick is active, but the possibilities are greatly reduced. So try to heal the sick characters: firstly because it will help you in your mission, secondly because the affected characters cough horribly and are sorry to look at them. 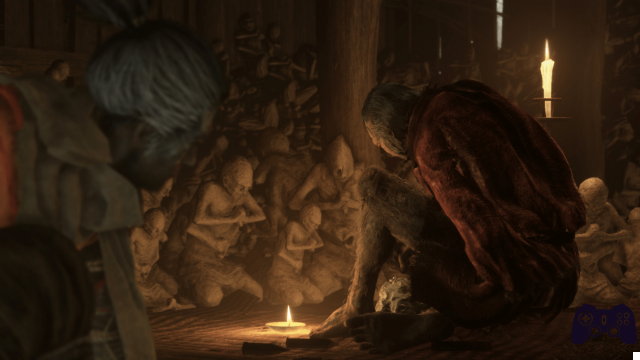 Below we propose a sort of vademecum of the disease, so that it can be recognized and treated.

The first time you die "too much" in Sekiro you will unlock a cutscene: you will wake up next to a coughing sculptor. The game will inform you that theRotten essence it poured into the sculptor; the more you die and come back to life, the more characters will be affected by the rotten Essence and thus the epidemic will spread.

The consequences of the disease

In Sekiro, the more often you die and resurrect, the more Dragon's sickness will spread. This disease puts your mission at risk, because it has concrete effects on the game. The epidemic may affect the NPCs, who may even die. In case a non-player character dies it would no longer appear in the game, e you would lose side missions useful to the protagonist.

How to cure Dragon's sickness

Fortunately, the disease can be cured, and the effects will disappear. The first time you try to cure the disease, a secondary mission will be unlocked. You will need to speak with Emma at the Dilapidated Temple; will instruct you to collect a blood sample from an infected character. The easiest way is to go to the old lady who rang the bell at Ashina's castle, but you can choose any infected NPC in the game world. After collecting the sample, go back to Emma and talk to her, who will tell you to wait. Take a quick trip wherever you want, go back to Emma again and talk to her - this time she'll give you a Recovery Spell and a Drop of Dragon's Blood. Reach a Idol of the Sculptor and pray; then choose the option Dragon's Sore Healing and so you will cure an affected character.


Drops of Dragon's Blood: where to find them?

You will need more or less Drops depending on how many sick NPCs there are in the game. You can find the Drops of Dragon Blood in world of Sekiro: explore the map carefully! You can also get them from some defeated enemies, but the simplest way remains to buy them at a merchant. Each drop will cost 180 Sen; in case you need to make money quickly, here you can find out how!

Sekiro: Shadows Die Twice is the latest masterpiece of From Software and was released on March 22. The game is currently available for 4 PlayStation, Xbox One and PC! Have you already tried it and maybe you have already died several times? Tell us in the comments if you have already had experiences with Dragon's Sick!

For guidance on the how to cure Dragon's Sick in Sekiro that's all. Continue to follow us on the pages of Holygamerz for other guides on Sekiro and much more from the world of video games and more!

Back 4 Blood: how to activate crossplay

Fortnite: complete guide to the challenges of week 4 | Season 7