The new year brings with it four new operations that will engage players throughout their course. New operators and maps presented in a new light will try to change what are the game mechanics, innovating both the assault and the defense of the target. The first operation is Void Edge and together with the second will provide four new operators.

For the remaining two instead there are only two operators (one each). However in these last two operations there should be some rework of attackers and defenders, starting directly from Tachanka. Let's kick off this new traders guide and find out how to use all the new year 5's new entries Rainbow Six Siege. Meanwhile, here is the list of upcoming operations and operators:

Let's take a look at the Void Edge operators

The first operators of this new year are a forward and a defender respectively. We are talking about precisely Iana e Oryx, two characters who will surely influence, thanks to their particular skills, the gameplay of the game. As with the latest operators, a new map has not arrived with them.

It was also decided in this case to rework an existing one. The choice of developers is understandable; instead of creating something new, they decided to use their strength to perfect something that already existed. This also gave the possibility to create these two new operators. Now let's go into them more in depth in this Rainbow Six Siege Year 5 New Operators guide.

Encouraged to pursue her ambitions, Iana studied aerospace engineering to try to become a fighter pilot. Being suffering from albinism, her retina did not conform to standards and her candidacy was rejected. Nienke was not demoralized, however, and by studying systems engineering she managed to create special lenses that they could correct his genetic defect. 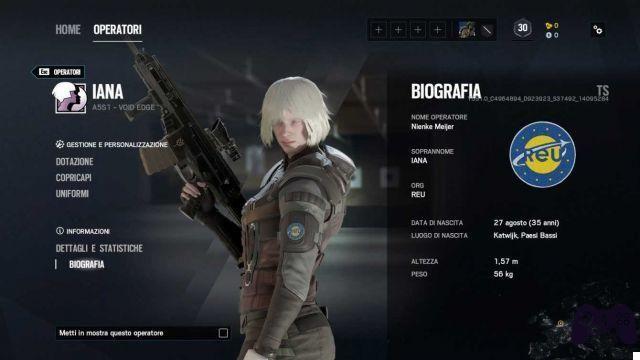 It is equipped with two assault rifles as its main weapons: theARX200 also supplied to Nomad and the G36C also supplied to Ash. As a secondary weapon it is equipped with a MK1 9mm, the same used by JTF2, the Canadian forces, Buck and Frost. As a gadget it will be possible to equip the fragmentation grenades for a more violent approach or the smoke grenades for a more tactical approach. The ability that differentiates it from other operators is called Gemini Replicator (infinite uses, but with a recharge time).

The Gemini Replicator allows Iana to create a holographic copy equal to her in all respects (weapons, headgear and uniform). This hologram, unlike Alibi's, is able to move. However, it will be impossible to use basic tools such as grappling hooks or ladders. It will not even be possible to shoot enemies, use melee to break barricades, traps or anything else, much less it will be possible to ping enemies. Why use it then? 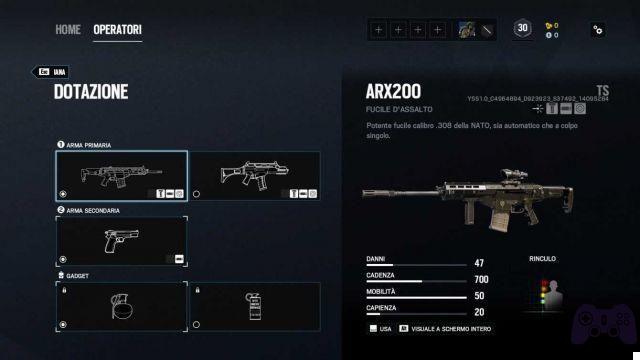 The speech is simple. If you have to enter a room without knowing what awaits you, she is the operator made for you. In fact, the hologram can pass over the traps without activating them. Furthermore, as soon as you see or hear an enemy it is spontaneous to shoot, throw a C4 or any other gadget to injure it (eg Smoke's toxic grenade). Iana is therefore an excellent operator for create a diversion for enemies to focus on the hologram while your teammates enter through another entrance.

However, this ability has many weaknesses and it is our duty to bring them back in this Rainbow Six Siege Year 5 New Operators guide. The hologram in fact it can be easily destroyed with a simple blow shot at himself or at Iana directly. The operator in fact during the entire time of use it will remain motionless in one position. There are also other methods to counter the hologram. An electrified barbed wire thanks to the Bandit, for example, it will make it disappear permanently. Same thing goes for the jammer of the Mute.

They can also be a good defense tool Maestro's cameras or bulletproof cameras. In fact, with these it will be possible understand if it is the real Iana or her hologram thanks to the heat source emanating from the operator. In fact, his figure will appear vivid in the room, while that of the hologram will be quite dark. Those of Maestro will also be able to destroy the hologram.

Little is known about Al Hadid. After disappearing for 15 years, he reappears in Jordan. Before disappearing again he learned wrestling in Istanbul, Muay Thai in Bangkok, tactical driving in Berlin and precision shooting in Damascus. Later we find him as a cadet at the fortress of Jalal "Kaid" El Fassi. From recruit he becomes first assistant and finally instructor and unofficial right-hand man of Kaid. 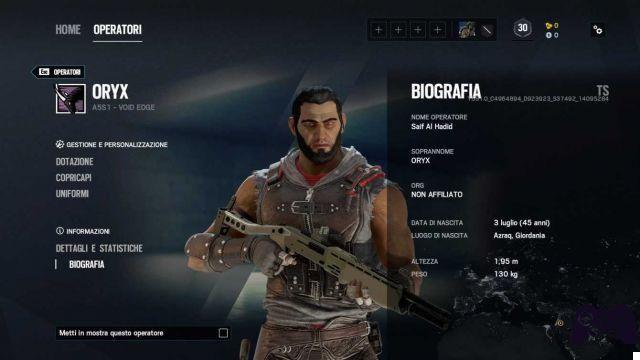 He is equipped with a submachine gun and a shotgun as his main weapons; L'MP5, as is the practice for almost all defenders, will be without the ACOG, lo SPAS-12 instead it is the rifle used by Valkyrie. As a secondary it has a USP40 and Bailiff 410, a rifle in the form of a revolver with minimal bullet dispersion. As a gadget it will be possible to equip the Barbed wire or the bulletproof camera.

The ability that differentiates him from other operators is called Scatto Crumb (infinite uses, but with a recharge time. Maximum three charges at a time). The Remah Dash allows Oryx to move faster than all other operators for about 5 meters. During the shooting phase the operator can also break through the wooden barricades and those of Castle, take down opponents throwing them to the ground or break through unreinforced walls. 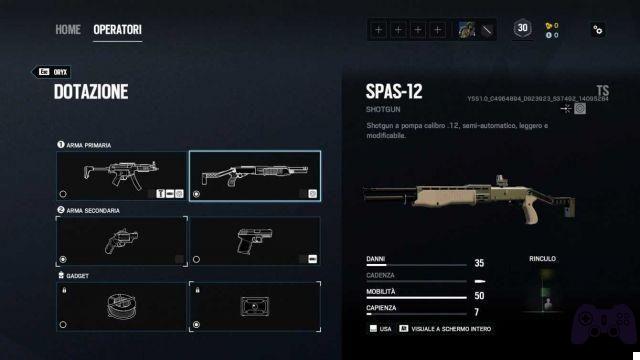 In the latter case, however, Oryx he will lose 10 health points and the stacks of Remah Dash will reset to zero. The operator then prepares himself as the natural counter of shielded operators; he is in fact able to land everyone, including Montagne with his shield fully open.

While Oryx may seem like a force of nature, countering this power won't be difficult. It is therefore our duty to bring back its weaknesses in this guide to the new operators of the year 5 of Rainbow Six Siege. The first limit derives primarily from the distance the operator travels. If an opponent is 6-7 meters away he will not even be touched by our operator and will be able to shoot him in complete tranquility. We must therefore use it in confined spaces or by breaking through a wall if we know that there is an opponent on the other side.

The second limiting factor is precisely the damage it suffers by breaking through unreinforced walls. If you find yourself with 10 or less life points and decide to break through a wall you will find yourself wounded on the ground. Also, after shooting, it will take about a couple of seconds to take the weapon again. This time frame will expose you to enemy fire, especially if they run in a group. The shot also can be interrupted by the Fist of Air by Nomad or dai Pungiglioni Trax by Gridlock. 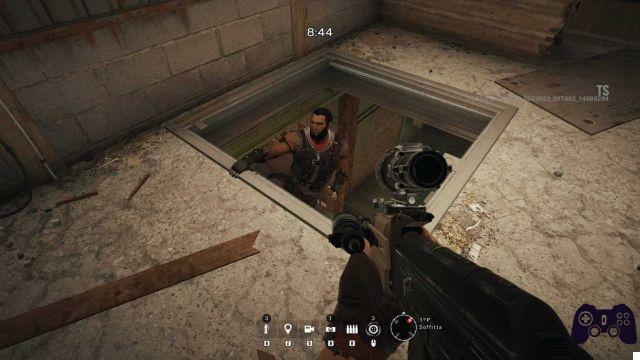 While it may seem limited in this respect, Oryx is capable of too climb up the hatches. Thanks to the SPAS-12 or the Bailiff 410 the operator can break the hatches and then use them later. In addition to climbing directly and reaching the upper floor, the player will be able to decide if hang on to take a quick look in search of enemies. However you will have to pay close attention to using this skill as you will be easy targets since you will not be able to shoot.

For this first part of the guide to the new operators of the year 5 of Rainbow Six Siege is now everything. In order not to miss all the news on the next operators that will be released in Ubisoft's most famous competitive game, continue to follow the pages of Holygamerz!