Legends of Runeterra: guide to the best champions of Bilgewater

Surprisingly Riot has released an update of Legends of Runeterra on Bilgewater, discover in our guide the best champions of this new region

When we thought we knew every card within Legends of Runeterra, Riot Games decided to surprise us by releasing the game's first expansion. With this update, Riot adds that of Bilgewater, the port city of the Blueflame Islands populated by pirates, hunters and outlaws.

Bilgewater's cards have a dynamic and "explosive" gameplay and despite its mechanics are often risky, they can be ideal for always being one step ahead of the opponent. Similar to other regions of the game, Bilgewater's decks can offer a good number of alternatives between the strategies to be adopted. Whether you decide to quickly annihilate your opponents with guns and cannons, or control the game with mighty sea monsters, it is up to you to decide which style of play to adopt to achieve victory. Are you ready to discover the best champions of the Bilgeater region? Let's start with our guide!

Between shadow and luck

In the archipelago of Blue Flame Islands hides Bilgewater, a port city inhabited by snake hunters, criminal gangs and smugglers from around the world. Here fortunes are accumulated and ambitions are shattered in the blink of an eye, and for those fleeing justice, debt or persecution it is a new beginning. Nobody in the back streets of Bilgewater cares about your past. But every morning the sunrise reveals unwary travelers floating in the harbor, with their throats cut and their purse empty.

Being free from the constraints of formal government, Bilgewater is full of opportunities. With money, you can buy everything from forbidden technology to the favors of crime lords. As long as there are ships and crews capable of sailing the seas, Bilgewater will likely remain one of the most picturesque and well-connected places in Runeterra. Unlike the other regions of Legends of Runeterra, in Bilgewater we find 5 champions: Fizz, Miss Fortune, Twisted Fate, Gangplank e Nautilus. Ready to discover them together? 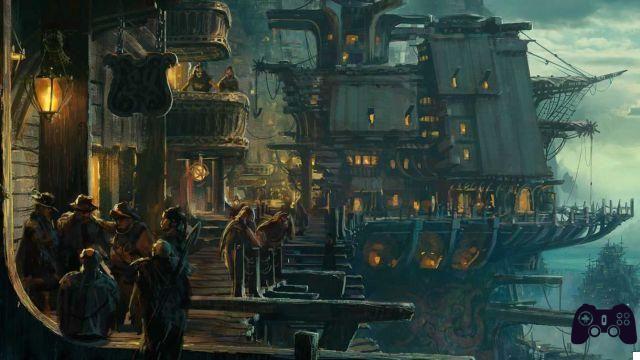 Fizz, the conjurer of the tides - Legends of Runeterra: guide to the best champions of Bilgewater

Fizz is an amphibious yordle that inhabits the Bilgewater region. Often it recovers and returns the tributes thrown into the sea by the most superstitious captains, but everyone knows that must be left alone. There are many stories about who underestimated his character. He is sometimes mistaken for a capricious spirit of the oceans and seems able to command the huge carnivorous beasts of the deep, taking great pleasure in the confuse allies and enemies.

If you thought you saw enough with Teemo's elusiveness, get ready to discover Riot's new creature. Fizz can get the attribute "Circumvention" whenever spells are cast, as well as stopping all spells that target him. By playing the right way, therefore, it is possible to make Fizz immune to enemy attacks and spell damage. On top of that, once Fizz gets evolved + 1 / + 1 and every time it hits the Nexus it creates one in the hand "Aquatic Evocation". This card confers “Vulnerable” to an opponent and summons a Longfang.

Fizz is perfect for staying in spell-rich decks, possibly at low cost. At the moment it shows particular synergies with the Piltover deck of Teemo or Heimerdinger, and with the Bilgewater deck with its units. Definitely one of the best champions of Bilgewater (and of all Legends of Runeterra).

Miss Fortune, the bounty hunter - Legends of Runeterra: guide to the best champions of Bilgewater

Sarah Fortune she is a ruthless Bilgewater captain known for her beauty and determination. As a child she saw the pirate king Gangplank slaughter her family, an act that she would avenge years later by blowing up her ship while he was still aboard. Anyone who underestimates her is likely to find a couple of bullets in the stomach.

Miss Fortune is a excellent mid-game champion, thanks to its cost compared to the statistics. Despite being marked by a decidedly aggressive style of play, its ability allows you to keep it safe, still inflicting damage in attack thanks to the other units. In fact, thanks to his ability, every time allies attack deals 1 damage to opponents and the enemy Nexus. Once he sees 4 Miss Fortune attacks he levels up, getting "Overwhelm" and dealing 1 damage to opponents and the enemy Nexus, but three times.

Miss Fortune is perfect in a deck based on the control and "survival" of this card. The current meta sees it in perfect synergy with Bilgewater decks that include Twisted Fate, or in Demacia decks paired with Quinn.

Twisted Fate, the master of cards - Legends of Runeterra: guide to the best champions of Bilgewater

Twisted Fate is a famous one crook gambling enthusiast. His talents have taken him to every corner of the world, where he has attracted the ire and admiration of many. He never takes anything seriously, facing the day with a mocking grin and the confidence of someone who doesn't care about anything. Twisted Fate always has an ace up his sleeve.

Twisted Fate is a godsend for gamers who like to build adaptive decks that offer numerous options and possibilities. Its stat cost might be a bit high, but its Destiny Cards it is truly destructive. Once played, Twisted Fate plays a fate card which can be:

Once fished at least 8 cards, Twisted Level up by getting + 2 / + 2 and seeing his ability enhanced, that is, he plays a Destiny Card every 3 cards played in a turn.

The decks based on the drawing of the cards prove to be ideal for Twisted Fate, showing a particular feeling with the decks of Piltover of Jinx or Heimerdinger, or the hybrid Noxus - Piltover decks with Draven and Jinx.

Gankplank, the scourge of the seas - Legends of Runeterra: guide to the best champions of Bilgewater

Brutal and unpredictable, Gangplank is feared around the world. It once reigned over the port city of Bilgewater, but since it was ousted many believe it has become even more dangerous. Gangplank would rather see Bilgewater drown in blood than leave her to someone else. Now, armed to the teeth, he is determined to reclaim what he has lost.

Gangplank shows a excellent cost-statistics ratio and proves to be a very powerful mid-late game champion. If we then add his Gunpowder Keg ability, we get a hero with top-end game potential in aggro decks. This mechanic is completely new in Runeterra: in fact, it is possible to fill a card slot on the board with a Gunpowder barrel to deal +1 damage with spells and abilities. Once you've dealt 5x damage to the enemy Nexus, Gangplank levels up, keeping the same abilities but gaining + 1 / + 1 and dealing 1 damage to all opponents and the enemy Nexus each time it attacks.

Gangplank is the ideal in aggro decks marked by direct damage such as Jinx's Piltover or Darius or Draven's Noxus ones (especially the latter). The Bilgewater-Piltover hybrid deck with Teemo also proves to be a great alternative.

Nautilus, the titan of the depths - Legends of Runeterra: guide to the best champions of Bilgewater

A legend, as old as Bilgewater, the armored colossus known as Nautilus wanders in the dark waters of the Blue Flame Islands. Driven by a forgotten betrayal, he strikes without warning with his huge anchor, to save the wretched and drag the greedy to their fate. They say you attack those who forget to pay the "Bilgewater Tribute", dragging it underwater. An iron warning for which no one can escape the depths.

Nautilus is mammoth and tough just like in League of Legends. With his 0/12, "Tenacity" and "Fearsome" it really proves to be a problem in the defense phase. Despite the mechanics of Nautilus making him a difficult champion to play and very late-game, once he leveled up he reveals himself to be one of the stronger end-game cards. Because of the attribute "Depth", Nautilus can only level up when we have fewer than 15 cards left in the deck. Once evolved, however, Nautilus unlocks its full potential, becoming a beast from 13/13, copying all Thrown allies costing 4+ to the deck and decreasing the cost of all “sea monster” allies by 4 Mana.

Nautilus is a card that is not at all simple to use and definitely situational. For now, the strongest synergies are shown in the control Bilgewater-Freljord hybrid decks, alongside champions like Ashe o Braum, in case you bet everything on the late-game. Played well, Nautilus can prove to be one of the best champions of not only Bilgewater, but Legends of Runeterra as well.

In the darkest waters

Well friends, this was our guide to the best Bilgewater champions featured in Legends of Runeterra! We hope we have been of help in descending into the mysterious waters of the Blue Flame Isles and the dangerous alleys of Bilgewater. Don't forget to follow our guides on the remaining regions of the game here:

We invite you to experiment to find the best combos and synergies between the cards of this brand new expansion of Legends of Runeterra, and as always we invite you to stay updated on Holygamerz for more guides, news, updates and much more on the world of video games. Bye!

Legends of Runeterra: guide to the best champions of Demacia ❯

add a comment from Legends of Runeterra: guide to the best champions of Bilgewater