Along with the Lonely Isle of Armor DLC, a new special raid boss: Zeraora. This new event perfectly mirrored the previously introduced raid of Mewtwo, and allowed during its course to obtain several useful items, including the Rockarmor. The only drawback, however, was that it was not possible to capture the boss, with the desperation of those who had the good fortune to meet him chromatic.

Thankfully, the legendary XNUMXth generation mystery was recently released for everyone in a chromatic version. You won't find it in the game, however: you'll need Pokémon Home.

How to redeem Chromatic Zeraora

First a couple of prerequisites:

Once you have passed these steps, proceed as follows: 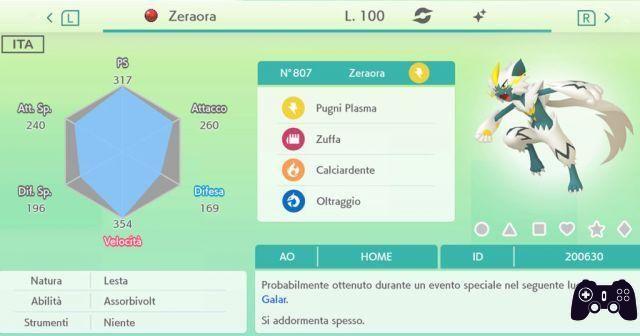 A very simple procedure, which therefore does not require the activation of a paid subscription to Pokémon Home. I suggest you to access the software from time to time to check for any other gifts. For example, if you haven't already redeemed them, along with Zeraora you will find a Sobble, a Grookey and a Scorbunny with their hidden abilities.