Deltarune Chapter 2: How to Beat All Bosses

Deltarune Chapter 2 has been out for a few days now, and in this article we will offer a guide on how to beat all the bosses of the adventure, so that you have some help in case you find yourself in difficulty

As Toby Fox has accustomed us over the years, playing Deltarune you will not meet the classic RPG video game. Instead of fighting against enemies, in fact, every fight is made up of some puzzle that must be solved, in order to give the player the opportunity spare the enemies, rather than annihilating them, so that they eventually become gods as well useful allies.

While for most enemies this is a fairly straightforward process (just use the action of ACT to increase the indicator MERCY up to 100% and then finish the meeting), for bosses it's more complicated to be implemented, as each of them features unique mechanics ranging deciphered and understood. And in fact this will be our goal while driving: we will therefore see how to beat all the bosses of Deltarune Chapter 2, saving them. Continue in the article for all the details!

While the first chapter of Deltarune it's out now almost 3 years ago, chapter 2 was released on all digital stores only recently. In this second chapter they are present further battles which you will surely find even more creative and particular compared to those of the first. There will also be some secrets to explore to unlock very interesting additional content. In short, while waiting of the release of the last chapters of the adventure (which, according to Toby Fox himself, will be released all together in a single package), we players can delight in discovering all the contents of Deltarune Chapter 2: having said that, let's start with the actual guide on how to beat all the boss peacefully. 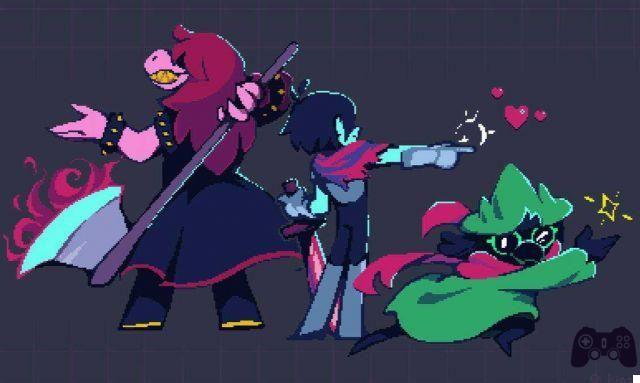 Sweet, K_K and Cap'n - Deltarune Chapter 2: how to beat all bosses

Like before bossfight let's see the one with the trio formed by Sweet, K_K e Cap’n. The procedure, in this case, is quite simple: what you have to do is dance with Kris to make Cap'n pick up a rhythm, who will consequently start dancing too. You will have to keep dancing with Krin, until the other two characters, Ralsei and Susie, they don't learn R-Action e S-Action. At this point you can make all the characters dance at the same time, and that's it. 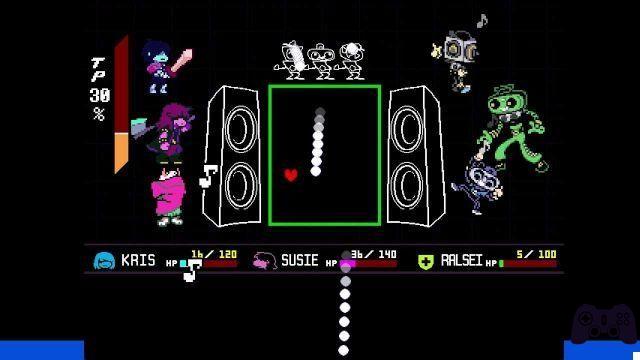 Berdly (on the bumper car) - Deltarune Chapter 2: how to beat all bosses

Also with Berdly the mechanism to save it is very simple. The action to use to raise his MERCY indicator è BumpX, to collide with Berdly's car. Each encounter he receives will increase his gauge by 12%, 15% or 18%. After reaching 100% MERCY, you will destroy Berdly's car and the fight will end accordingly. In the next paragraph dedicated to how to beat all the bosses of Deltarune Chapter 2, we will see how to finish the second bossfight against Berdly. 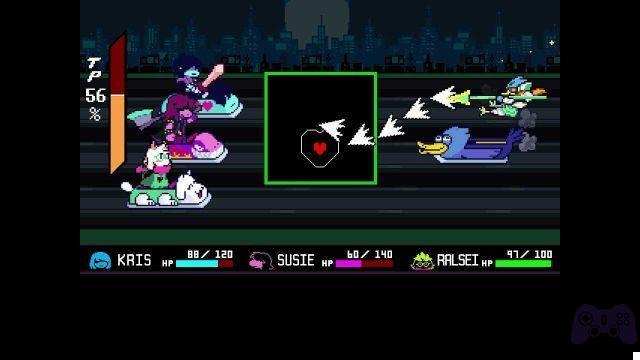 Berdly - Deltarune Chapter 2: how to beat all bosses

Here too, again, the mechanism it is not difficult to understand. The only problem is this fight turns out more difficult of the previous two, and therefore the difficulty lies in survive during the various rounds to then reach 100% of MERCY. In general, to make the indicator go up, just use “Play Smart”, “Play Dumb” or select the N-Action. When Berdly summons enemies, the advice is to use “Sleep Mist” to quickly knock them out before they become a problem. Given the difficulty of this bossfight, it is good to know that Noelle can use healing skills to help allies. 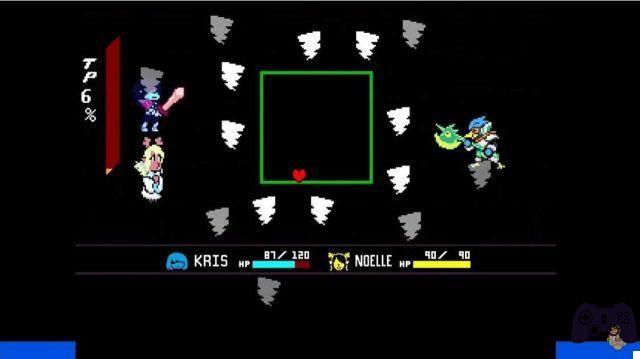 Spamton - Deltarune Chapter 2: how to beat all bosses

Proceeding in this guide on how to beat all bosses peacefully in chapter 2 of Deltarune, let's move on to talk about Spamton. In his case, there is one quite specific sequence of actions to follow to end the fight while saving the opponent. Everything takes place in the section “Deal”: First, the first option to select will be “Tell Me More”.

After that, you will have to select, in order “Don’t Give Money”, “Take The Deal”, “Don’t Buy Insurance” e “Refuse Account Access”. Each of these actions, except the last one, will add the 20% to the MERCY bar, so when you get to the bottom you will have to accept the final agreement to end the fight. Note that if you need to cure you from the damage suffered, you will have to use “DealHeal”. 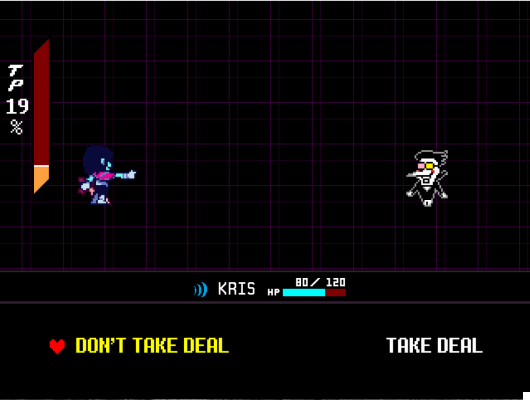 Rouxls - Deltarune Chapter 2: how to beat all bosses

To win against instead Rouxls, your goal will be to conquer as many as possible CASE​. The battleground will in fact be composed of various houses, which will be conquered with action “Take House”. To take more than one house at a time, you will need to accumulate TP tramite Defend. Then, when you see that it will be possible, take it directly four houses at a time. The bossfight will continue until there are no more houses to conquer. To win, the ideal tactic is to take the central houses as fast as possible, so as to block the way for Rouxls who will then be forced to give you the victory. 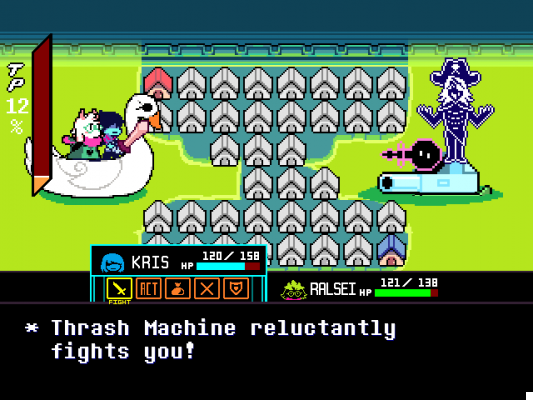 Queen & Berdly - Deltarune Chapter 2: how to beat all bosses

We are approaching the final part of the adventure of chapter 2 of Deltarune, and with it also at the end of this guide on how to beat all the bosses. The penultimate boss we'll talk about is made up of the pairing Queen e Berdly. Your goal will be to fill Berdly's MERCY indicator, so as to save him. The actions you can use to do this are “Group Loosen” e “Throw”.

When the queen builds a shield instead, it will be up to you to use “Toast” e “Grouptoast” to weaken it. Once done, use "Throw” and try to take as many of as possible marker present above Berdly, so as to be able to double or even triple the percentage of MERCY. Once Berdly is released, the fight will end. 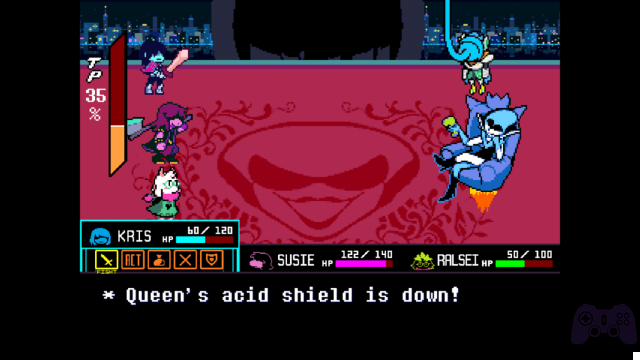 Giga Queen - Deltarune Chapter 2: how to beat all bosses

Arriving at the last boss, we will notice very quickly of how this one is not a normal bossfight. It is a meeting in style Punch-Out !! where you will have to avoid consecutive enemy attacks e respond with uprights and special attacks. It is in fact the only bossfight that it cannot be won peacefully, so your task will be to finish all Queen's HP.

You will have dodge right, left or down to avoid the attacks, and then respond in turn. When you attack, you will see that yours will increase TP bar (although to have extra TP it will be essential, as usual, Defend), thanks to which you will then unlock actions such as "Ducky Mode" to make a very powerful attack, “Turbo Dodge” to increase dodge speed, or “Self-Fix” to heal himself (which will be fundamental in this fight).

To win against this boss, you will have to overcome all 3 round consecutivi. Each round the enemy will unlock new attacks with which to harm yourself, and therefore you will have to be attentive and reactive. As for the first attacks, in order to dodge them you will have to observe which way the boss is pointing before doing so, so you can dodge in the opposite direction. But when he throws balls at you, you will have a chance to hit them to send them back to the sender. At the end of the fight, Queen will throw a giant ball at you, which you must repeatedly hit to send it back to the sender and end the meeting. 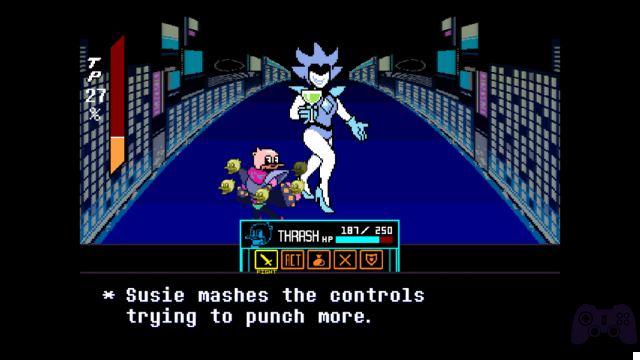 At this point, we just have to wish you good fun in your game of Deltarune Chapter 2. We understand that such a game can turn out sometimes difficult during the various fights that you will face, and that a guide can help clear your mind on how to solve these problems. And, after this, we just have to wait for the last chapters to arrive conclude the story of Deltarune that all the fans are hugely appreciating.

At the end of this guide on how to beat all the bosses of Deltarune Chapter 2, if you want to stay updated on this and all the other most important games of the moment, we invite you to stay tuned to the pages of Holygamerz. If you prefer to buy game keys at discounted prices, you can do so by going through Instant Gaming.

Deltarune Chapter 2: how to find (and beat) the secret boss ❯

The Last of Us 2, where to find all the workbenches

GreedFall: how to best create your character | Guide

Ori and the Will of the Wisps | Spirit Trials Guide (Sprinter)

Add a comment from Deltarune Chapter 2: How to Beat All Bosses