Dark Souls III, all about multiplayer and summons | Guide

For anyone who has never played the Dark Souls series, Dark Souls III multiplayer can be quite complicated to understand. Here is a detailed guide on how to have fun with invasions and help each other with summons

Playing cooperatively a Dark Souls III perhaps it is not that common, perhaps also because it is not so easy to activate the game. The idea of ​​the developers is not to let you play the whole game together, but to invite a friend only when you really need them. That said, there are some simple steps you can take to be able to play co-op with anyone or just your contacts from the friends list, let's see them together.

> The White Stone and the evocations 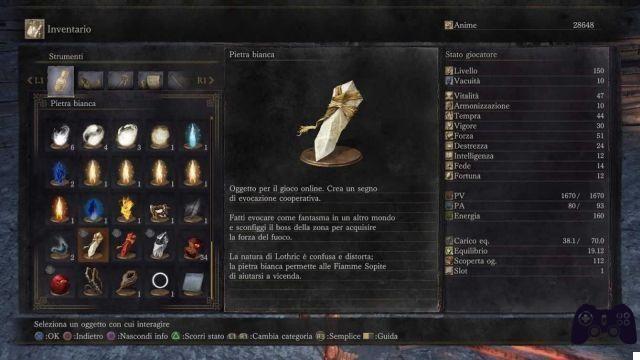 La White Stone it is usually the first taste of multiplayer that any player discovers in the course of their history. There White Stone you can buy it fromHandmaid dell 'Altar of the Bond for 500 souls.

It can be used to leave white summon marks (usually near a bonfire or before a boss room) to help a random player summon you.

It is also a good way to gain souls, in fact, if we die in the world of the one who summoned us. let us not lose the souls we have set aside.

In order to in turn summon another player in case of need, we must have the Embers and matchmaking activated.

> The Red Stone and fair PvP 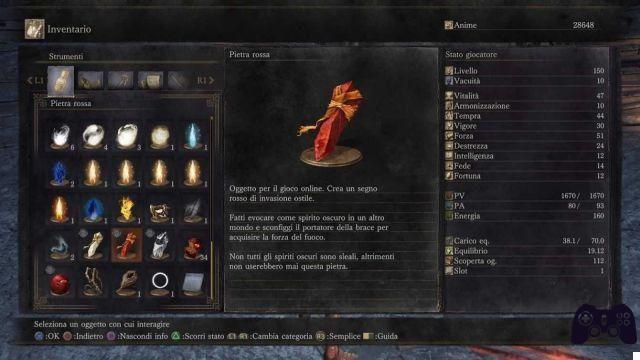 La Red Rock allows us to evoke how Dark Spirits, or evoke them; to get it you have to kill the only "snail" that does not attack us in the area in front of the Rosaria's bedroom. Practically the invasions made using this stone are "planned" and, let's face it, what it would be Dark Souls without some fair PvP? Let's start by describing what this “fair PvP” is. Mainly it is just a set of correct behaviors to follow during an invasion made thanks to Red Rock.
The most important rule to follow during such an invasion is: never use flasks It would be during a fight; This is because no one likes a 20 minute match and often, if they are used, victory is not determined by skill but by how many flasks you have. Two other relatively important rules, which more than anything else avoid annoying behaviors, are: do not overdo it with quick attacks (see R1 on PS), since obviously those with a heavier weapon would not be able to land even a shot, and do not hit themselves the opponent while "buffing" the weapon.

These items are used to invade worlds of random players. To call the invasion a success, one must kill the bearer of the Embers. If you use this item often, know that you will be deeply hated by the bearers of the Embers. This is because you have not been "invited" into their world and you are not welcome at all. So don't be surprised if your opponent uses items like the Giant Tree Seed or Fiaschette d'Estus. Fair PvP, in this type of invasion, appears to be an unknown magical practice.

Some pacts provide for an automatic summoning if active, for example, if you are in a certain zone or if you attack a certain mob to "defend the zone"; or if you are invaded in a specific area, a spirit will automatically be summoned to help you.  Some of the pacts that provide for automatic summoning are: - Pact of the Via Blu: summons the Blue Sentinels to help you if you get invaded. - Blu Sentinel: You are automatically summoned to help the players of the Pact of the Blue Way. Guardians of Farron: in certain areas you automatically invade the players. Aldrich's followers: Automatically invade players who are in the area before Anor Londo. 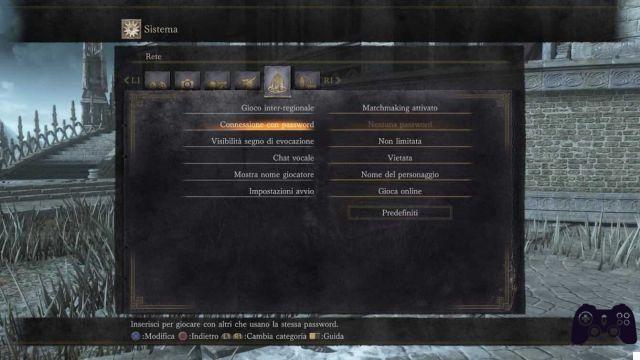 Playing with friends is possible, both if you want to help each other with the White Stone, both if you want to challenge yourself to an old-fashioned sword fight. To do this, just enter a password and then leave an evocation mark. To make it active you need to enter the settings and under "matchmaking"Reach the item" password ". At that point all that remains is to set it, obviously the same for both.

add a comment of Dark Souls III, all about multiplayer and summons | Guide