In this episode of the Monster Hunter Rise weapons guide we will talk to you about the loaded blade, a technical and very powerful tool

To approach a new chapter in the series, however, it is necessary to overcome a great initial obstacle, that is the choice of equipment. Monster Hunter weapons really differ a lot from each other and to become skilled hunters it is essential that you find the one that suits you best. To help you with your research we have therefore decided to write one introductory guide for all Monster Hunter Rise weapons and in this new episode we will talk about the loaded blade.

Like the sword sword, the loaded blade also stands out thanks to its ability to change. In fact, this instrument has two different transformations, one in sword and shield and one in ax. The first form allows the player to simultaneously wield a handy short sword and a durable shield, while the second will allow you to combine these two weapons to create a powerful vial-powered ax.

Again to make the most of this tool it is essential to learn to master both transformations, but in this case it won't be that easy. The loaded blade is one of the most complicated weapons in Monster Hunter Rise and consequently, although you have this guide available, we do not recommend using it if you are approaching the series for the first time. 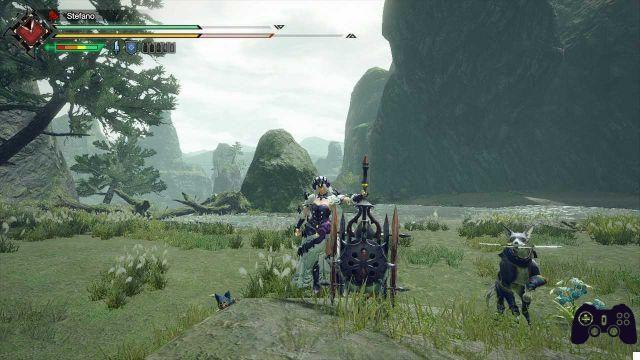 In sword and shield shape the loaded blade will allow you to inflict good damage on monsters while also offering you the opportunity to defend yourself. By pressing "X"You can start a quick combo consisting of 3 attacks that can be chained to a shield with"X + A", While with holding down"A”You can unleash a powerful pair of vertical slashes. All of these moves deal a good amount of damage, but their main utility is to charge the sword.

Each hit landed with the blade will increase its level and once it reaches its maximum all your attacks will bounce. In this case, all you have to do is press "ZR + A”To unload your sword and fill the vial indicator. As we had already explained to you in the guide dedicated to the sword, the vials are used for apply bonus effects to some Monster Hunter Rise weapons and, in the case of the loaded blade, they also allow you to perform devastating attacks in the form of an ax.

In ax shape your weapon will be very powerful, but to unleash its true potential it is necessary to have a good number of loaded vials. By pressing "AIn fact, you can perform a series of deadly spin attacks which will also generate small explosions by consuming vials. Also, by pressing "X + A“, You can unleash a very powerful explosive move called elemental whirlwind. 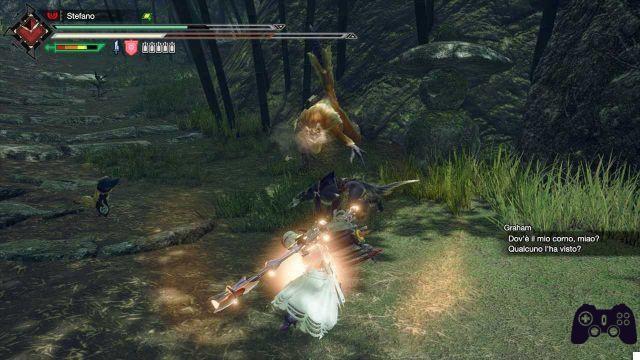 Now the point of our guide has come where you will understand why the loaded blade is one of the most complex weapons in Monster Hunter Rise. In the previous paragraph we told you about the main mechanics on which this tool is based, but in reality there are many others. In particular, the ones that will be most useful to you during the hunt are the so-called enhancement techniques. These moves will allow you to temporarily buff your sword or shield, greatly increasing its effectiveness.

upgrade the shield first you will need to fill the vial bar (not necessarily up to the maximum). Next you'll need to enter ax form, unleash an elemental whirlwind and to press "ZR" during the attack preparation animation. This way you will perform a quick attack in transformation e all your vials will be absorbed by the shield.

For the duration of this boost (which varies based on the number of vials absorbed), the defense of your shield and the attack of your ax will be greater. Also in this state yours elementary turbines they will consume all the vials in one shot and deal a lot more damage, but if you want to it is possible to perform a more contained explosion pressing "back + X”During the attack preparation animation.

power up the sword instead, all you have to do is upgrade the shield, keep pressed "X" during the vial charge animation with "ZR + A”And release it at the right time. This way your sword will be infused with the element of your vials and will inflict greater damage.

There is also another mechanic called "guard point"Which allows automatically defend yourself while making certain moves. Especially during many attacks in transformation your character will be protected by the shield for a few frames. To be able to master this technique correctly you need to practice a lot, but if you learn to use it actively you can reap enormous benefits. 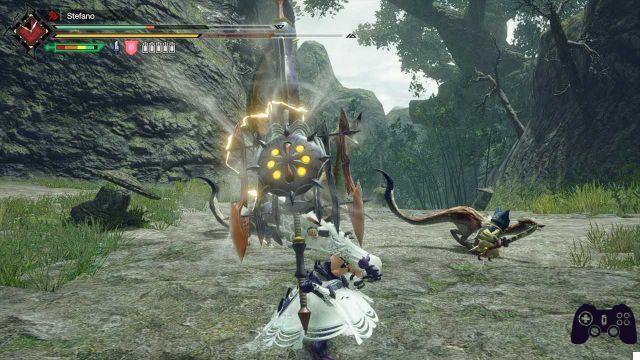 The loaded blade edge insect attacks are: transforming advancement e counter-echo of the peaks. Transforming advance allows you to shoot forward and pass quickly in the form of an ax without being able to be repelled. The usefulness of this move lies in the possibility of being able to quickly reduce the distance to your target and then attack with a sword or a spinning blow by pressing "X" or "A" respectively.

Controeco delle Vette instead is a very useful move that allows you to block a shot with the shield and immediately fill all vials. This technique is perfect for blocking an incoming powerful attack or simply starting a fight with full vials.

In this paragraph of the guide we told you about the attacks with wire insect for the loaded blade present in the latest demo of Monster Hunter Rise, but before concluding we would like to remind you that in the full game these techniques may vary based on weapons or other factors. In the various videos shown by Capcom they are present several attacks unusable in the demo, so it is likely that you can change them in some way. 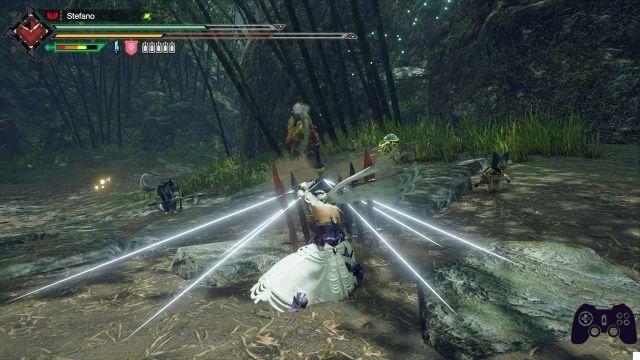 This concludes the episode of our Monster Hunter Rise weapons guide dedicated to the loaded blade. Now you just have to wait for the full game to be released understand if the complexity of this weapon suits your style.

In case you want to know more about the game, we invite you to read ours preview. Also, if this guide dedicated to the loaded blade was useful to you, we suggest you check out the other articles on Monster Hunter Rise weapons here on the site as well:

Do you want to be a video game expert and know all the tricks, guides and reviews for your video games ? Holygamerz.com is a group of video game fanatics who want to inform you about the best tricks, guides and tips. We offer you the best information to be a reference in gaming, so here you can find guides, tricks, secrets and tips so you can enjoy your games to the fullest. Are you ready to get all the achievements of that game that you resist so much? Enter now and enjoy your favorite video game to the fullest!
Monster Hunter Rise, introductory guide to weapons: spear ❯

Warframe Octavia Prime: Guide, how to modify and equip it

Legends of Runeterra | Guide to the best decks

New challenges ahead for the Mario brothers!

Animal Crossing: New Horizons, which animals to catch before the end of September