Life is Strange: True Colors, where to find all the gems in the LARP

The graphic adventure Life is Strange: True Colors is now out, transporting many fans to the story of Alex Chen: in this guide we will explain where you can find all the gems during the LARP that takes place during the story

Life is Strange: True Colors has now arrived all over the stores for a few days, allowing longtime fans and new players to dive into the events of Alex Chen and the inhabitants of Haven Springs. Between strong emotions and mysteries to solve, this graphic adventure signed Deck Nine has all the elements that have always characterized the series of Life is Strange, however, distinguishing itself for the originality of the narration and for some particularly well-chosen choices, making itself appreciated by both long-time fans and new players.

But without launching into further judgments, let's head towards the target of this article. With this guide in fact, we will try to give you some help in one of the game sections of Life is Strange: True Colors: in particular, we will explain where to find all the gems in the LARP which will take place throughout the story. What does "LARP" mean? The answer (if you don't already know it) you will find it below, and, unless you are afraid heavy spoilers, we advise against proceeding further if you have not yet played Life is Strange: True Colors.

The GRV is talked about since the first chapter, and it is about the Live Role Play and Steph says he wants to organize. Initially, Gabe and little Ethan were supposed to participate, but after that death of Gabe, Steph decided to revisit his initial idea. In the second chapter in fact, seeing Ethan drastically down, Steph decided to readjust his GVR campaign to Ethan's comics, centered on the character of Thaynor the Monster Slayer. Alex will then find himself, in the next chapter, having to disguise himself as a bard, to accompany Ethan (in the role of Thaynor) in this new adventure.


Alex and Ethan's goal (assigned by Jed as King Tabor) in Life is Strange: True Colors LARP is to find (and we'll find out where) 3 gems scattered throughout Haven, so that he can end the age of monsters in the kingdom. For this GRV, all the explorable part of Haven will be totally transformed, and therefore the first advice we can give you is the one to give free rein to your exploratory spirit. Also because, in addition to gems, exploring around you can find scrolls, coins and other objects useful for your adventure. 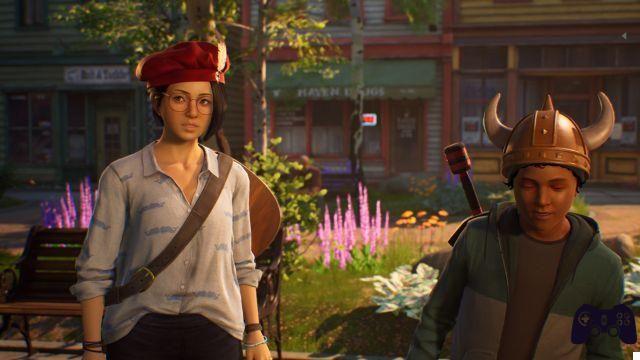 Soul Amethyst - Life is Strange: True Colors, where to find the gems in the LARP

First of all, starting from the park you have to go back to the city by following the only path available. As you can see in fact, most of the routes will be blocked, and we must therefore follow the only path available to Haven. When you are near the park exit, it will appear Ryan ambushing you dressed as a wolf, and so the time will come for a beautiful one Old-fashioned RPG battle. Remember to take a look at the character sheets if you don't remember the effect of Thaynor and the bard's attacks and spells. Once defeated, Ryan will drop some items as a loot, including one mysterious key. This key will be essential to find the first gem, that is the amethyst of the soul.

Once out of the park, go to the Black Lantern (for the occasion renamed "Taverna del gabbiano thirsty"). Inside you will find a (rather realistic) scenography of a massacre, of which the only survivor appears to be Duckie as an old gnome. At this point, Ethan will ask him if he recognizes the key, and Duckie will claim that it belonged to the old host who died in the massacre, and that therefore they will have to find the key. correct lock inside the tavern. The object you are trying to open is the music box positioned behind the counter, in front of the blackboard with the menu. 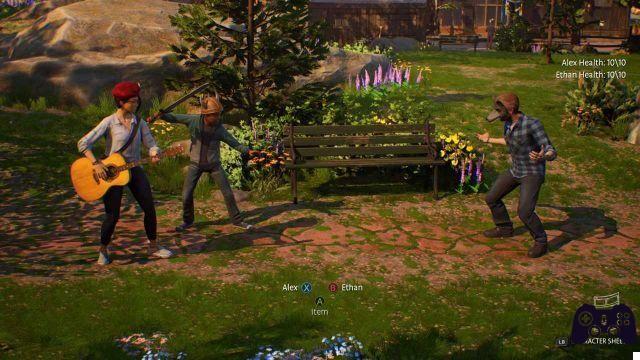 Soul Sapphire - Life is Strange: True Colors, where to find the gems in the LARP

Proceeding in this guide on where to find all the gems in the LARP of Life is Strange: True Colors, to find the next ones you will have to exit the Black Lantern and proceed through the main street. As you proceed, you will pass close to a side alley (the one with the mural so to speak), and you'll hear Alex suggest that maybe you could find something down the alley. You can decide whether to head straight to the alley, or whether to proceed and stop at Steph's record shop, renamed "Emporium of the Thieving Magpie".

Steph has various items for sale in his store, including one Sapphire of the soul. Initially its cost will be well 10 000 gold coins (and it is clearly impossible to get that many), but if you try to bargain, Steph will instruct you to bring her the scale of a magic fish present towards the river. The fish in question is a sea snake (interpreted, like every enemy, by Ryan) who is at the end of the alley in fact, and you will have to defeat it to get the scale. If you have gotten it earlier the bell from Duckie, you can use it to put it to sleep, otherwise you will have to face it in combat. Obtained the scale, exchange it at the general store with Steph to get the second gem. 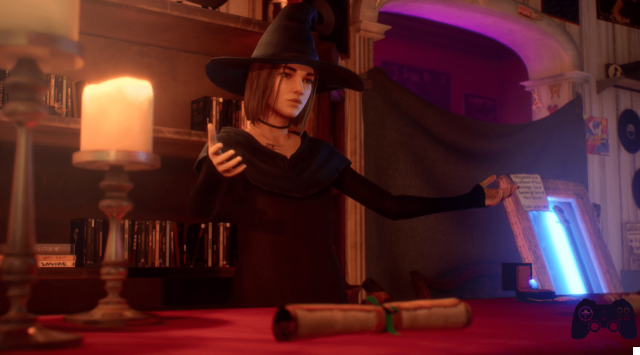 Soul Ruby - Life is Strange: True Colors, where to find the gems in the LARP

With two out of three gems, it's time to head to the Bridge of Flowers. There you will find the last enemy, namely a great and fearsome troll (always Ryan). This unfriendly-looking troll possesses a belt, in the center of which is attached the last gem, the Ruby of the soul. It will then be up to you to defeat him. If you bought the troll dust (for the price of 3 gold coins), you will have the opportunity to use it to make the troll friendly, and have the gem (and also a scroll directly delivered to you, depending on the dialogue options you choose). If you haven't bought the powder, you will have to defeat him in combat. 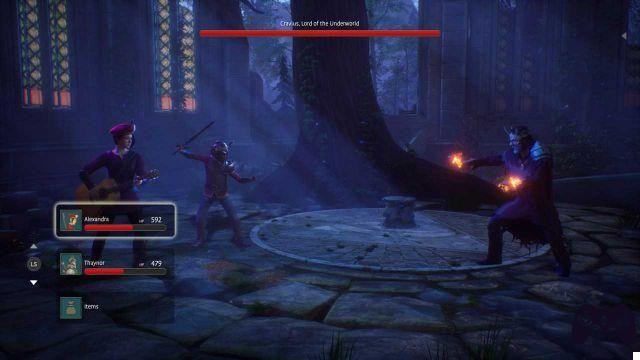 At this point, find the three soul gems, you just have to go back to the park to return them and King Jed. Arriving at the park, however, you will find the king's place Notheria, the spirit of the forest, played by Charlotte, Ethan's mom. Notheria will congratulate you on your accomplishments, giving you as a reward the heavenly sword. After Ethan has set the three gems inside the sword, you will enter one vision sprung from Ethan's joy, in which the whole invented setting becomes incredibly real. At this point it will come Re Tabor, who turns out to be an imposter who has tasked you with finding the gems to steal them and increase his power, giving way to the latest bossfight. The identity of the antagonist will be chosen based on your preference expressed in the previous chapter.

So at the end of this guide on where to find all the gems during the LARP in Life is Strange: True Colors, we just have to pass the ball to you. What do you think about it? Did you enjoy this live role-playing section? Waiting for your response, we just have to invite you to stay tuned to the pages of Holygamerz for updates on all the titles of the moment. If you prefer to buy game keys at discounted prices, you can do so through the Instant Gaming portal.

Life is Strange: True Colors, where to find all the memories ❯

Add a comment from Life is Strange: True Colors, where to find all the gems in the LARP