Demon's Souls boss guide: how to beat the Flaming

In this new episode of our Demon's Souls boss guide we will explain how to beat the Flaming, the unleashed fire demon

As for difficulty, the new remake di Demon’s Souls it has nothing to envy to the original work of From Software. The game world is infested with fearsome demons and treacherous traps, but the biggest obstacle for most players is the bosses. For this reason we have decided to create one Complete guide to Demon's Souls bosses and in this new episode we will explain how to beat the Flaming, the unleashed fiery demon.

Protect yourself from the heat

Let's start our umpteenth guide on how to beat Demon's Souls bosses talking about as usual how to prepare for confrontation with the Flaming. This terrible demon has been trapped for many years inside a temple in the underground of Stonefang, and this certainly it didn't do her mood any good. The Flaming indeed is one of the most aggressive enemies of Demon's Souls and for sure it will be able to offer you one of the most challenging challenges in the game.

Before starting this arduous battle, it is important choose the right equipment. This is because, while the Flamboyant mostly uses his fists to attack, all his moves will inflict pure fire damage and consequently much of the armor will be useless against him. Consequently, before starting the battle we advise you to equip the armor with the highest fire defense you have, regardless of physical defense. In addition, we suggest you use a shield capable of resisting flames well and, if you have one, also the fire resistance ring.

In addition to equipment, if you have a character who can use magic, it's important to choose the right spells as well. The Flaming is a lot weak to magical damage, then spells like Arrow of the Soul e Soul Ray they will greatly simplify your fight. Furthermore, you will certainly get a great advantage by using magic as well Veil of Water, capable of temporarily increasing your fire resistance. 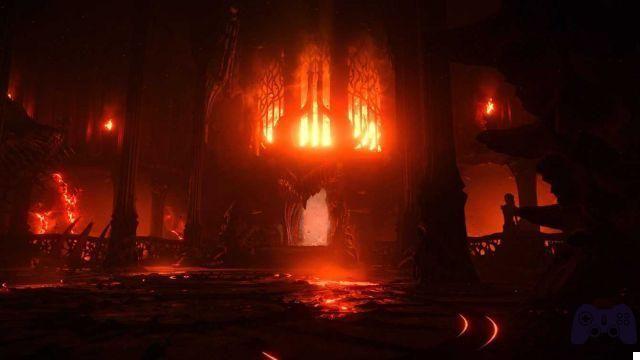 The Flaming is an extremely aggressive boss and will not give you a moment's respite during the fight. This demon will mainly attack by delivering a series of punches, but some of them will end with one small blast of area fire. The arm itself can be parried without problems but the shock wave instead could be more complex to intercept, so it is essential to guess which move it is going to use. The secret to understanding this is to observe the movements of his arms since, if the punch comes from top to bottom, when it hits the ground it will always trigger an explosion.

In addition to these common hits, the Flamboyant can also perform two particularly powerful special moves. The first is a jump attack which fortunately is quite simple to avoid, while the latter is a strong explosion with a large area. As soon as you see the boss raise both fists to the sky we advise you to get away quickly, as as soon as it hits the ground it will generate a large explosion. In case you can't get far enough you can always try to defend yourself from the shock wave, but if you don't have a powerful enough shield the result will probably not be the best. 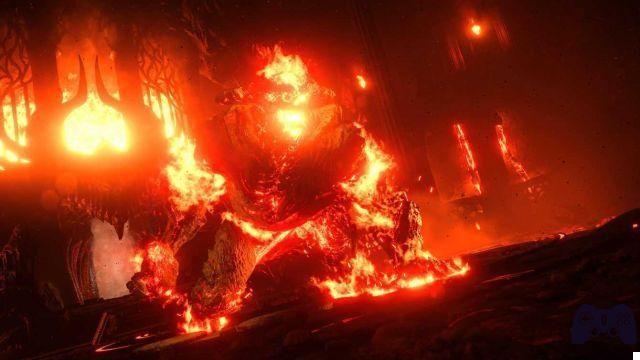 A Fierce Battle - Demon's Souls boss guide: how to beat the Flaming

If you have a character who is all about close combat, get ready for a really grueling battle. As we have already told you before, the Flaming is a very aggressive enemy specialized in close combat, but despite this the best way to deal with him is to position yourself in front of him without ever straying too far. This is because after attacking or taking damage the boss will often perform side shots and standing in front of him you will be able to react more easily. Also, if you are close enough, you can more easily dodge jump attacks simply rolling under him and you may even be able to hit him a couple of times as he recovers from the landing.

Now that you know how to position yourself, let's move on to actual combat. Due to its rapid movements, the Flaming does not offer many openings suitable for counterattacking. The best time to deal damage is right after one of its small explosions, as it will remain stationary for a couple of seconds. For this reason we advise you to always stay in front of him and dodge backwards his normal punches until he uses an area attack.

Using this technique you should be able to inflict one or two hits each time and calmly defeat the boss. This is the safest method but if you are feeling brave and have the right build you can try a more straightforward approach as well. Despite the size, the Flamboyant does not possess much balance and consequently you can easily stun it using fairly heavy weapons, such as broadswords. So with the right weapon you might be able to hold the demon still long enough to inflict serious damage on it. Just remember to don't waste all your stamina in one series of attacks, otherwise the boss could make you pay a lot. 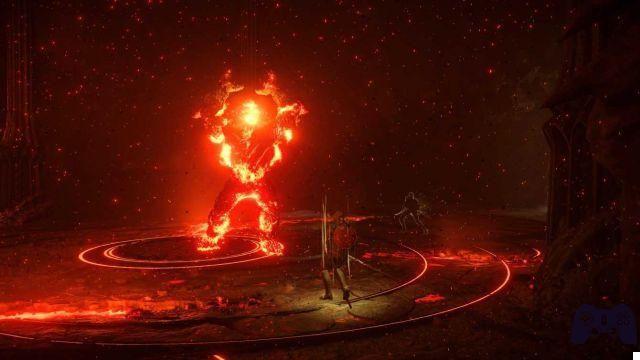 Keeping your distance - Demon's Souls boss guide: how to beat the Flaming

Thanks to the long range offered by the spells, mages don't need to get close to the Flaming to damage it. For this reason, in case you are using a character capable of using magic, the best way to defeat this boss is to always run and stay as far away as possible. This way you shouldn't have much difficulty in the course of the fight and you only have to worry about dodge some sporadic attacks.

The only aspect to keep under control is the time of casting spells, since if you don't calculate it well you could risk getting hit in the middle of the animation. As for MP regeneration, on the other hand, you shouldn't have any problems, since the arena offers several places to hide for a few seconds and use some spices. 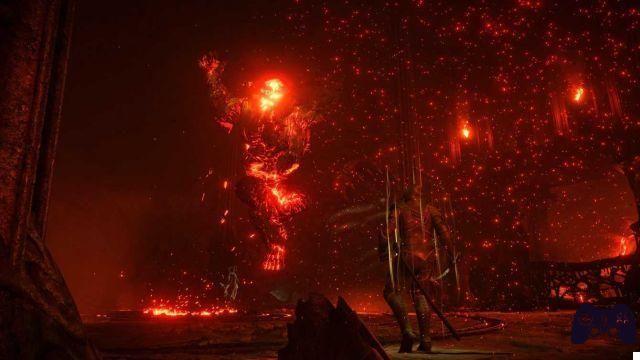 The flame goes out

This boss is one of the biggest obstacles in the game, but with the help of our article and a little cool head you shouldn't have a hard time defeating him. If this guide on how to beat the Flaming has been useful to you, we recommend that you check out the other Demon's Souls boss guides on our site as well:

add a comment from Demon's Souls boss guide: how to beat the Flaming