The ramshackle cast halfway between Chuck Jones and Yuji Naka in one page: a quick guide to Crash Bandicoot characters

We have already examined the curiosities about Crash Bandicoot, but in this "guide"(Among many quotation marks, we speak only of the narrative compendium in reality) we will talk about the multicolored cast of characters seen on the Wumpa Islands. There isn't much, actually, that harks back to our planet's southern hemisphere, save maybe a character or two. However, the cross between the Looney Tunes and Dr Moreau's Island has many distinctive faces. Many of which return, in more or less important roles, just today in It's about time su PS5, Xbox Series X/S e Nintendo Switch. Let's get it inside!

It is certainly no mystery that, following the Crash Bandicoot trilogy (plus CTR), the development team N has moved on to darker cast of characters than we will see in our guide. Just think of Jak from the second franchise created under the aegis of Sony, Jak & Daxter. After the silence in the first chapter, his vocal debut in the second game was an angry "I'll Kill Praxis!". Things have always been done more serious and mature, later, with Uncharted and The Last of Us. However, even the justification of the cartoon-style characters of the franchise currently in the hands of Activision boasted a deconstructive streak.

Making a narrative convention plausible by adding a touch of realism that clashes with the context is what fiction buffs call. deconstruction. And the world of Crash, despite the homage to the cartoon world evident in the footage that should have been part of the original game (above), has gone far beyond what the Nintendo and Sega mascots did at the time. Anthropomorphic animals are the result of mutations, one of them is clearly a corrupt gangster armed with a drum gun, and the nuclear waste from the experiments ends up directly in the sea. However!

The very first Crash Bandicoot boasts a clear cut in the themes between the three main worlds that compose it, and as you will see in this guide to "who's who" this also involves the cast of the characters present. The island where the protagonist lands is home to a tribe of aborigines, the second world consists of one hostile and unexplored nature, while the third is where Cortex has corrupted every nook and cranny of his surroundings with his own machinery. The characters, as you see above, are the following.

Crash Bandicoot 2 - Guide to the cast of characters

Focusing primarily on the new characters in this part of our guide, let's see who has joined the cast of the sequel Crash Bandicoot 2: Cortex Strikes Back.

Crash Bandicoot 3 - Guide to the cast of characters

As a bottleneck regarding the expansions to the cast of the characters in this guide we have the new arrivals of Crash Bandicoot 3: Warped. 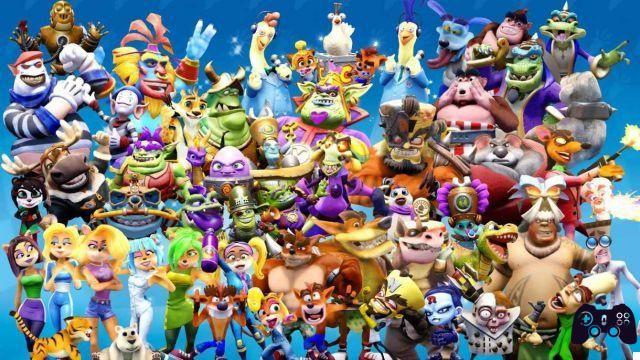 Of course, we glossed over the characters created during Naughty Dog's farewell to the franchise (like Nitros Oxide, Crash Team Racing's alien antagonist) and later (like Crunch in Wrath of Cortex, N. Trance on Game Boy Advance, the Viscount on Nintendo DS, etc.) for a reason. We wanted to focus on these protagonists precisely to emphasize how much the classic trilogy unfolds an essential role in the narrative sector of the title which today reaches new platforms.

Now it's up to you to tell us yours: what do you think of this cast? Let us know below, and as always don't forget to stay on Holygamerz for all the most important news on the gaming sphere. For your gaming needs, you can instead find the best discounts in digital format on Instant Gaming.

Crash Bandicoot On The Run: tips and tricks to survive the mad rush ❯