This is the game for you if you are a huge Kamen Rider fan. It includes all the main Riders from 1971 to 2011 plus the partners of OOO (Birth); each Kamen Rider has their own unique moves and abilities, as you have seen from their respective series. It is also possible to upgrade them by purchasing items from the shop. In the game you can choose 2 Riders, the first will be you, while the other will be the partner (CPU), so you can perform combos in pairs depending on the compatibility of the two Riders. The game is a simple beat-em up, where you will travel from one stage to another, trying to defeat numerous enemies. You can acquire experience points for each defeated enemy and level up after accumulating a certain number. As the levels increase, there will be an increase in the Rider's attacks and defenses and you will learn new skills. In addition to experience points, enemies will drop coins that you can use to purchase items from the shop. Another feature of the game is that you can adjust the difficulty of each level.

MENU DURING THE GAME

The game features a total of five stages, each consisting of six mini-stages (two are hidden), a shop and a boss battle. There are missions to complete and bonuses to unlock. There are five or six extra mini-stages on each map, they are password unlockable and contain no mission objectives.

Stage 2/2 (Temptation of the mist)
Mission: complete the stage with more than 50% HP
Bonus stage: Unlocked Rider 2 and Super-1

Stage 2/3 (Jungle of the dark knight)
Mission: complete the stage using Rider 1 and 2 with more than 50% HP
Bonus stage: unlocked Amazon and Kuuga

Stage 3/1 (Volcanic region)
Mission: use V3 as a player to complete the stage
Bonus stage: Unlocked Riderman and Kiva

Stage 3/2 (Road of flames)
Mission: use Faiz as a player to complete the stage
Bonus stage: Ryuki unlocked

Stage 4/4 (Below freezing)
Mission: complete the internship using no more than one life

Stage 5/2 (Force through)
Mission: complete the internship using no more than one life

There are a total of 29 playable Kamen Riders in this game and below they have been sorted according to the year they were made. This section will show abilities, normal and finishing moves, and updates for each Rider. Refer to the Stage section on how to unlock them.

- updates: Muffler of Skill: increases the effect of specials
- skills: Rider Teaching: when you use Rider 1 as a player, the partner gets help. - Double Rider: allows a "double kick Rider" when paired with Rider 2
- finishing moves: Rider kick and Rider double kick (with Rider 2)
- moves: A: jump; B or Forward + A: strong kick; A (half jump): ground kick; L + A: Rider kick
- Pair Special Moves Rider 1 & Rider 2: Press L + A next to Rider 2 to use the double special move.

- Updates: Gloves of Power: Specials are easier to activate
- abilities: indomitable spirit: revive with low HP when defeated; Double Rider: allows a "double kick Rider" when paired with Rider 1
- finishing moves: Rider punch; double kick rider (with Rider 1)
- moves: A: charge of punches; B or Forward + A: strong kick; jump + A: kick on the ground; L + A: Rider punch
- Pair Special Moves Rider 2 & Rider 1: Press L + A next to Rider 1 to use the double special move.

- updates: Muffler of Power and Skill: increases the duration of "barrier V3"
- ability: barrier V3: when you lose some small HP, it raises a barrier making you temporarily invulnerable to any attack
- final move: centrifugal kick V3
- moves: A: punch V3; B or Forward + A; slip attack V3; jump + A: kick V3; L + A: return kick V3; R: barrier V3 (Rider ability)
- pair special moves V3 & Riderman: press L + A next to Riderman to use the double special move.

- Updates: Scientist's Pride: Learn the "Attack of the Attached Arm"
- skill: Rider arm: hits an enemy
- finishing move: attack of the attached arm
- moves: A: fist of the tied arm; B or Forward + A: flying kick;
jump + A: Riderman kick; L + A: attachment attachment; R: arm tied (Rider skill)
- Riderman & V3 pair special moves: Press L + A next to V3 to use the double special move.

- Updates: Two Thousand Skills: Learn the Finisher "Pyrokinesis"
- skill: thumbs up: Kuuga picks up a random item when he defeats an enemy
- final form: Ultimate (only during the final move)
- final move: Pyrokinesis
- moves: A: dragon rod; B or Avanti + A: sword of the titan; Up or Down + A: pegasus bow-gun; jump + A: powerful kick; L + A: Pyrokinesis; R: thumbs up (Rider skill)
- Kuuga & Agito pair special moves: Press L + A next to Agito to use the double special move.

- Updates: Agito Frypan: decrease in the reload time of the "modified charge kick"
- Skill: Modified Charge Kick: Hold the R button for the strongest Rider kick
- final form: Shining (only during the final move)
- final move: Rider shining kick
- moves: A: storm halberd; B or Avanti + A: cut of a saber; Up or Down + A: burning fist; jump + A: shot Rider; L + A: football Rider shining; R: Modified Charge Kick (Rider Skill)
- Agito & Kuuga pair special moves: Press L + A next to Kuuga to use the double special move.

- updates: Hiyori's Lunch: increases the duration of the "clock up"
- skill: clock up: everything slows down except Kabuto
- final form: Hyper (only during the final move)
- Finisher: Max Hyper Cyclone
- moves: A: Kabuto punch; B or Forward + A: Kabuto combo; jump + A: avalanche slash; L + A: Hyper maximum cyclone; R: clock up (Rider skill)
- pair special moves Kabuto & Faiz: press L + A next to Faiz to use the double special move.

- updates: Naomi's Coffee: increases the chance of being in the Climax
- skill: Climax: attack and defense when an enemy appears
- final form: Super Climax (only during the final move)
- final move: super turbulent kick
- moves: A: extreme blow; B or Forward + A: dynamic strike; Up or Down + A: wild blow; jump + A: DenRider kick; L + A: super turbulent kick
- Den-O & Kiva duo special moves: Press L + A next to Kiva to use the double special move.

- updates: Bloody rose violin: increases the HP gain of "Kivat bat 3rd"
- skill: Kivat bat the 3rd: Kiva gains HP when he defeats an enemy with a special move
- Finisher: Crash of the Empress Moon
- moves: A: slit of the howling Garulu; B or Next + A: Basshaa water tornado; jump + A: thunderous slap Dogaa; L + A: crash of the empress moon
- pair special moves Kiva & Den-O: press L + A next to Den-O to use the double special move.

- Updates: Birthday Cake: Learn the "Birthday" Finisher
- skill: Coin Get: increases the amount of coins obtained
- final move: chest cannon; birthday
- moves: A: Birth demolition; Back or Forward + A: piercing arm; Down + A: digging arm; Up + A: crane arm; jump + A: sharp wing; blow + A: caterpillar leg; L + A: chest cannon
- Birth & OOO pair special moves: press L + A next to OOO to use the double special move.

This is just additional information about the game's enemies. Each enemy is drawn from different Kamen Rider series. Their attack and defense varies depending on the difficulty you have selected. This section is divided into 3 parts based on the strength of the enemy. 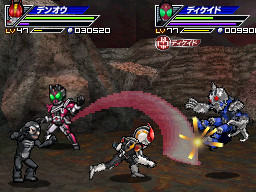 Add a comment from The All Kamen Rider Solution: Rider Generation