Star Wars: Battlefront 2 now has a few years on its shoulders, but it remains a title that continues to be talked about, especially now that it has landed on Game Pass thanks to the partnership with EA Play and its availability on the Epic Games Store in a totally free until January 21st.

Between intergalactic battles and chaotic assaults, you probably didn't get to grasp every single aspect of the world around you during your game. So here is the Secrets of Star Wars: Battlefront 2 that perhaps you have escaped.

The following article contains spoilers regarding the main campaign of Star Wars: Battlefront 2. Please continue at your own risk.

During the first mission you will hear theAdmiral Ackbar talk about some events involving Princess Leia. The famous character is referring to the events recounted in Moving Target, the novel that tells the adventures of a group of Rebels led by Leia on a mission that is positioned between The Empire Strikes Back and Return of the Jedi.

In the multiplayer map of the Maz Castle, during the external section, it is possible to see in the distance a very familiar spaceship. And the Millennium Falcon engaged in a no holds barred aerial fight. Also visible is a First Order transport ship.

L'Operation Cinder, one of the crucial parts of the Battlefront 2 campaign, had actually already been shown in the comic miniseries Star Wars: Empire in Pieces, dating back to 2015 and created as part of the "Journey to Star Wars: The Force Awakens" project. In the case of the game, we see events from the perspective of Iden, only hinted at in the comic as the one who led the squadron that came to Leia's rescue.

Operation Cinder, by the way, is also mentioned in an episode of the second season of The Mandalorian.

During the battle of Jakku, you will be able to hear a message addressed to the Phantom Squadron, led by the more than famous Wedge Antilles. The latter is something of a legend in the Star Wars universe, as he participated in virtually every major assault in the first trilogy (including those in the first and second Death Star) by surviving each of them.

During the mission that takes place at Castle of Maz, you will have the opportunity to meet a member of the Black Sun, one of the most powerful and dangerous criminal organizations in the galaxy, often in league with Darth Maul's Shadow Collective.


This isn't the first time this group has made an appearance in a Star Wars-themed video game. To remember their huge presence in the title for Nintendo 64 Star Wars: Shadows of the Empire.

Going back to Darth Maul, if you die in a multiplayer game with that character, a droid will say that somewhere Qui-Gon Jinn he is laughing. Obviously, this is an ironic reference to the fate of the Jedi master The phantom menace, during which he is killed by Maul himself.

In the Mos Eisley map it is possible to reach the famous tavern and activate a holographic console that will make no less than the Cantina Band of A new hope.

During the main campaign, a man named Rax is often mentioned. In this case, the characters are referring to Gallius Rax, the manager of the Super Star Destroyer Ravager, and spiritual heir to the will of theEmperor Palpatine.

The fall of the Super Star Destroyer Ravager

During the Battle of Jakku, you will have the opportunity to shoot down a group of AT-ATs with orbital strikes from the immense Starhawk spaceships. These are also the ones that, during the battle, shoot down the Super Star Destroyer Ravager.
If you manage to defeat all of the TIE fighters before the second objective is activated, you will have access to more information regarding the battle between the ships in orbit.

The Ravager, by the way, is also the Star Destroyer that Finn and Rey pass through during the chase on Jakku ne The awakening of the Force.

The map of Lor San Tekka and Poe Dameron

One of the members of the Inferno Squad, Del Meeko, was stationed on Scarif as an Imperial soldier before becoming part of Iden's squad. Here it seems he was in contact with Lor San Tekka, the one who then gave Poe Dameron the map leading to Luke Skywalker in The Force Awakens.

These are the 10 secrets that you may not have found in Star Wars: Battlefront 2. Please let us know if you have already come across them or if, perhaps, you have found others. 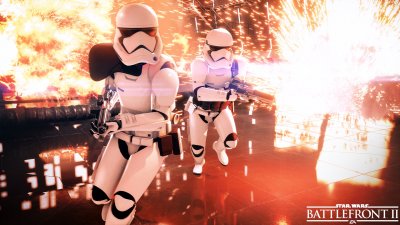