Outriders: guide for all legendary weapons

In this new guide we will tell you about all the legendary weapons currently available on Outriders, the new looter shooter from Square Enix

A week has now passed since the launch of Outriders and it looks just like the new looter shooter of People Can Fly e Square Enix is enjoying great success. These days a lot of players they crowded the servers of the title on each platform, living the gaming experience in their own way.

There are those who love to have fun slaughtering hordes of alien creatures and those who prefer to get lost in the fascinating history of the planet Enoch. Whatever your approach, however, sooner or later you will find yourself looking for legendary weapons. These tools of destruction are perfect for facing the strongest enemies of the endgame and consequently they will be essential to fully enjoy the game. To help you find the legendary weapons that suit you best we have therefore decided to write this guide, where you will find the statistics of all Outriders best firearms.

Before starting to talk about legendary weapons, we would like to use a paragraph of this guide for introduce you to the Outriders rarity system. If you have already played looter games like Destiny, Borderlands o Godfall for sure by now you will know this system perfectly, but newbies may need some clarification.

In every self-respecting looter shooter the players come flooded with tons of different weapons and this also happens in the latest effort of People Can Fly. In Outriders almost every single activity will reward you with many weapons that are apparently very similar to each other but which differ in rarity. There are 5 levels of rarity in the game: common, uncommon, rare, epic e legendary.

Obviously, the higher the rarity, the more powerful the weapon will be and consequently the legendary ones will be the best to face the most difficult points of Outriders. This does not mean, however, that you should ignore the less powerful weapons throughout the game. Legendary gear really is very rare, so it could take a lot of hours of gameplay before you even find one. For this reason we advise you to upgrade even some less rare weapons waiting to find a legendary one. 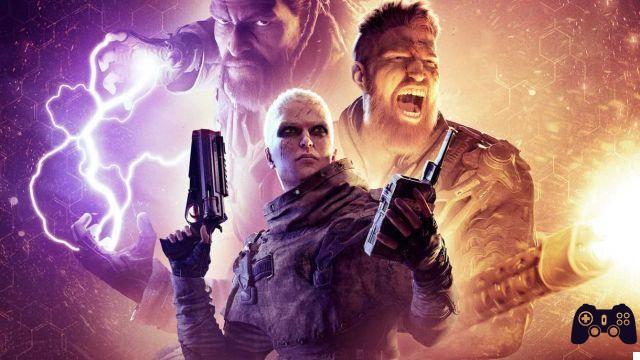 Let's kick off our Outriders Legendary Weapons guide by talking about the Voodoo Matchmaker. This Assault rifle it suffers from a very low range for its class, but manages to compensate for it thanks to its very high accuracy, power and rate of fire. Also, thanks to its particular abilities, this weapon is capable of deal damage to multiple enemies at the same time. If you are looking for an assault rifle with which to destroy enemies at close range, then the Voodoo Matchmaker is perfect for you. Below you will find all the characteristics of the weapon: 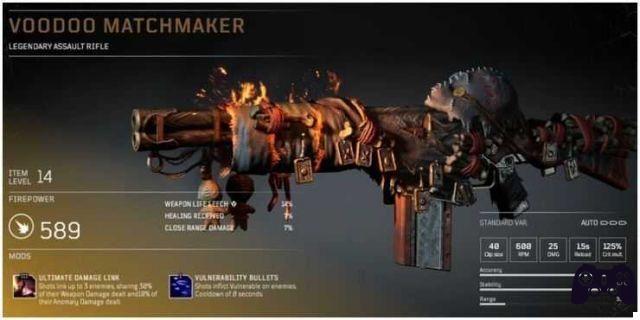 Let's stay a while longer in the field of assault rifles talking about the Thunderbird. This weapon has very similar characteristics to those of the Voodoo Matchmaker, but thanks to one greater range it is a better choice for those who prefer to keep a safe distance from enemies. Below you will find all the features of this assault rifle: 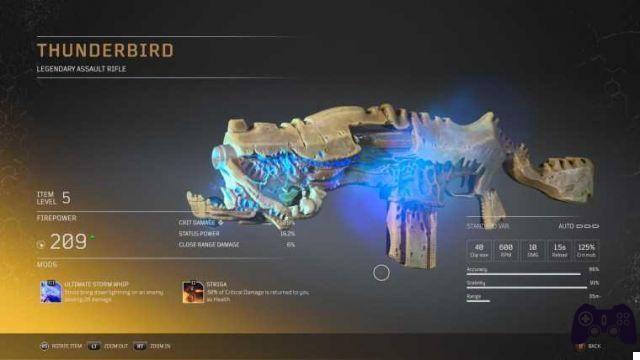 Let's move on to the shotguns with the Golem’s Limb. This weapon obviously has one very low range typical of its category, but makes up for it thanks to a very large magazine and a very high damage. Plus the unique abilities of this shotgun will guarantee you one greater resistance in combat, making it the perfect choice for those who love to jump into the fray and attract the attention of all enemies. Below you will find all the features of Golem's Limb: 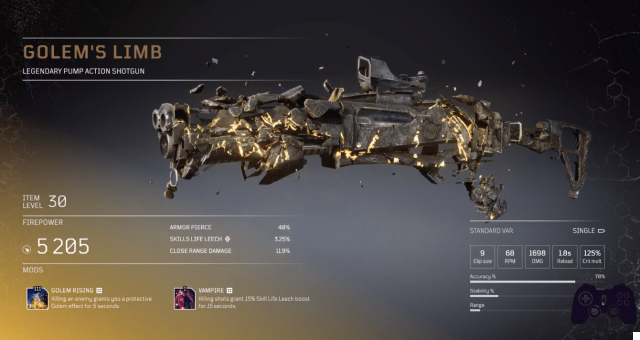 Compared to Golem's Limb this shotgun features lower accuracy and magazine size, but on the other hand it boasts much higher damage and critical strike chance. If you are looking for a weapon that can take down enemies with one hit, then l’Aerie Master it's perfect for you. Below you will find all the features of the shotgun in question: 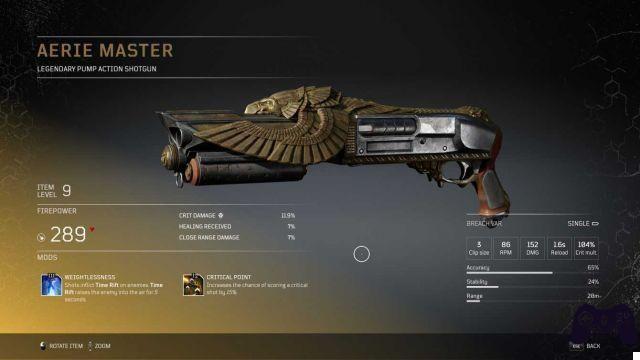 Il Rarog's Gaze is a carbine extremely powerful perfect for taking down enemies from long distances. This weapon is very accurate but unfortunately suffers from a very high recoil which will force you to aim well after each shot. However, if you manage to land the shots then you will be rewarded by some powerful explosions that will bring your enemies to their knees. Below you will find all the features of Rarog's Gaze: 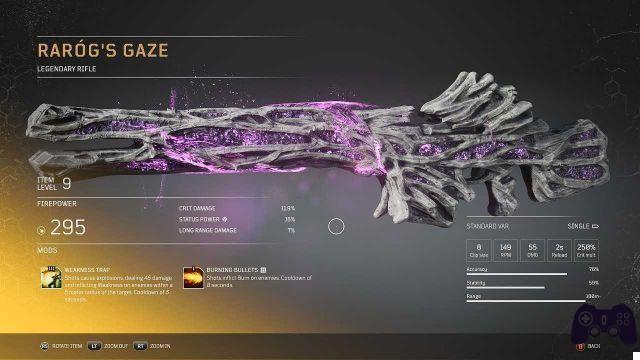 If you want to experience the thrill of taking out enemies from a distance with a single shot then the The Iceberg is the perfect weapon for you. This lethal sniper rifle boasts both good damage and phenomenal accuracy, and consequently it is exceptional in eliminating distant targets. The only downside to The Iceberg is its own high recoil which will force you to waste a few seconds between shots to reposition the viewfinder. Below you will find all the characteristics of the weapon: 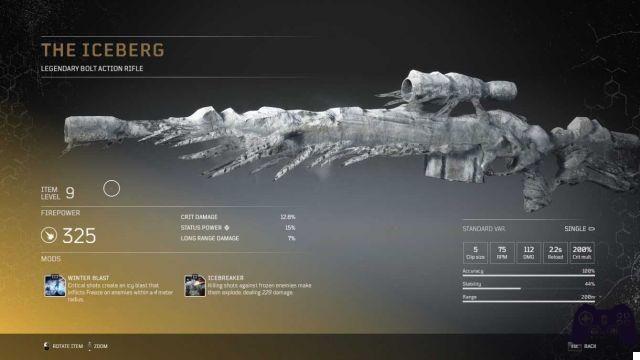 Let's move on to theAmber Vault, a good double weapon suitable for any occasion. This automatic rifle is perfect for anyone who likes to always be in the middle of battle, given that its damage increases based on the number of enemies killed. Below you will find all the features of the Amber Vault: 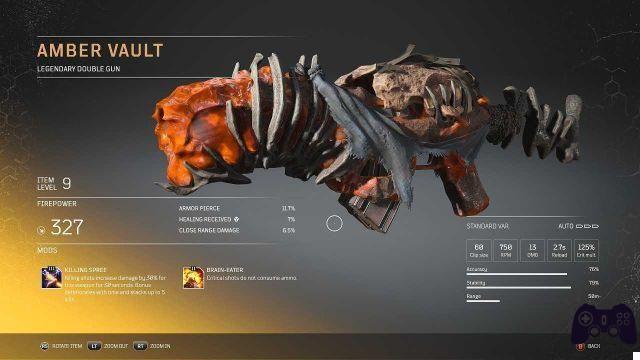 The Migraine is one light machine gun very powerful but suffers from an extremely short range. Thanks to its ability to inflict bleeding and at the high rate of fire, this weapon is perfect for face large groups of enemies at close range. Below you will find all the features of this light machine gun: 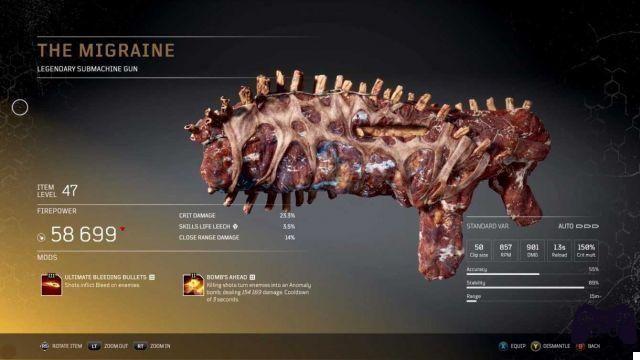 This medium machine gun legendary stands out thanks to a combo of extremely high range, accuracy, stability and rate of fire. The only downside is the very low damage, but firing so many shots per second for sure you won't suffer too much from this lack. Below you will find all the characteristics of the weapon: 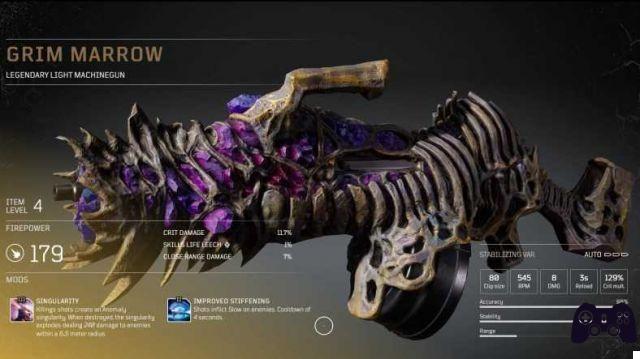 Finally, we conclude our guide to the legendary weapons of Outriders with the Torment & Agony. This gun boasts very high characteristics for its category and consequently represents a valid secondary weapon to take to the battlefield. Below you will find all the features of Torment & Agony: 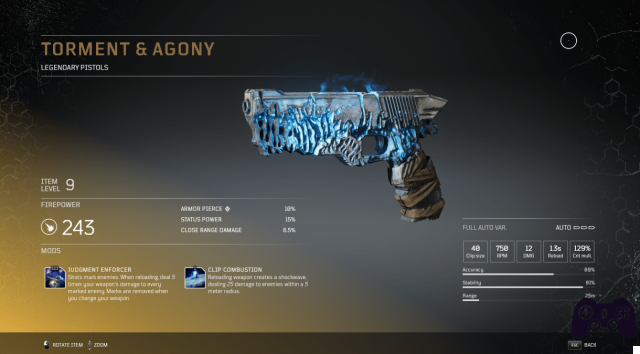 Here ends our guide dedicated to the legendary weapons of Outriders. If this guide was helpful to you, we suggest you also take a look at the other articles dedicated to the game on our site:

Outriders is disponibile ora per PC, PS4, PS5, Xbox One, Xbox Series X e Xbox Series S. If you are interested in staying up to date with all the news on the world of video games and much more, then continue to follow us here on Holygamerz. Furthermore, in case you want to buy some games at an advantageous price, we suggest you take a look at the many offers on Instant Gaming.

add a comment of Outriders: guide for all legendary weapons