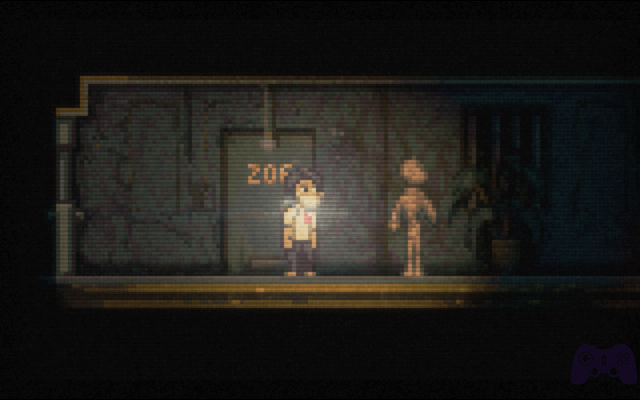 Wii U's gaming offering became noticeably more attractive over the course of 2014, thanks to the release of titles such as Bayonetta 2, and promises to be further enriched in 2015 thanks to exclusives such as Splatoon. However, attention should also be paid to those indie games that many land on Nintendo's housewife and that have so much to tell. This time it is the turn of Lone Survivor, a title released in 2012 on PC and which already in 2013 had been released on PlayStation 3 and PlayStation Vita in the edition The Director's Cut. Arrived a few days ago on Wii U and PS4 thanks to Curve Studios, here are our impressions.

Lone Survivor is set in a post-apocalyptic world in which something akin to an infection has ravaged cities and turned the inhabitants into a sort of meat-eating zombie. As the protagonist, of whom almost nothing is known and who identifies himself with the simple name of "You", your goal will be to find other survivors so as not to be alone.

In a climate of tension, anxiety and fear, the level of sanity of You will also play a fundamental role, increasingly compromised, and which will create a series of difficulties for the player in being able to interpret the events. And not only that, as it is increasingly complicated to be able to distinguish the illusions and images of the protagonist's mind from real events, giving a general sense of confusion that will accompany you from the beginning to the end. The plot of Lone Survivor is so complex and mysterious that over the years it has managed to create a long series of discussions and theories to the point that even today it continues to be talked about, for good and rarely for evil, demonstrating the enormous success it has had. in the audience. Since this is the version "The Director's Cut", it is also useful to dwell on the changes made to the plot compared to the original version. In this sense, nothing has changed, presenting the same events in order to guarantee anyone to be able to live the experience as it was originally intended. However, there are two new endings that do nothing but deepen in a certain way the "good" ending already present.

Run! Escape! There is the Nemesis! There are ghosts!

Lone Survivor is presented as a survival horror in two dimensions (although some sequences are in 2.5D, ed). Visiting the various settings proposed in search of other survivors,

exploration is one of the cornerstones of Lone Survivor

You will also have to get your own food, which is often spoiled, and will have to be careful to go back to your room to rest so as not to worsen the conditions of your mental state. Different actions will be possible to improve (or worsen) this state: you can play with ESP, cuddle a cat, cook and feed with quality food, rest (or eat disgusting food, kill zombies, not sleep and then overdose on coffee). Each of these actions will have its contribution in determining the ending of the story. In addition, several options are also possible to face enemies, leaving the player to choose whether to kill them with the supplied gun or to avoid them (using the darkness, spoiled meat and / or flares). There is also a series of mirrors along the various game levels that will allow You to immediately return home. Basically, in this struggle for survival and against loneliness, exploration is one of the key elements of Lone Survivor and that thanks to the gloomy atmosphere and full of references (especially in Silent Hill, ed) guarantees an experience of the highest level and that will certainly leave its mark.

Not too many news

The "Director's Cut" version of Lone Survivor does not offer much new features compared to the original. Analyzing the first “New Game”, the differences simply concern the improved aiming and lighting system, where the latter allows you to better observe the environments, enriched and improved for this very reason. It will also be possible to activate the Expert Mode which does nothing but disable the use of the map (already not very useful in itself given the difficulties in being able to orient yourself, ed). Starting from the first "New Game +", however, it will be possible to access a series of new objects and the two aforementioned endings. In addition, there are some new areas. Exactly as happened with the PS Vita version of the game, the integrated touch controls on Wii U are not very useful, leaving the classic controls to be preferable for every situation. Although the few innovations are unable to justify a new purchase for old players, Lone Survivor - The Director's Cut is an excellent opportunity for those who have not yet had the opportunity to play Jasper Byrne's fatigue.

A new way of doing horror

Despite the pixelated and two-dimensional graphics, Lone Survivor is perfectly capable of causing anxiety and fear in the player. The reduced screen of the Wii U GamePad, in particular, allows a better identification in dark environments thanks to the help of the earphones that also allow you to enjoy the renewed soundtracks of the game to the fullest. The music present there has been expertly created and are suitable for each situation, ending up being a key element of the game mechanics themselves. With its formula, Lone Survivor was therefore able to create a survival horror that has little to envy to triple A titles of the same genre, experimenting with a new formula with a definitely positive outcome.


Verdict 8.5 / 10 It's Silent Hill in 2D Commentary Lone Survivor: The Director's Cut is the definitive version of Jasper Byrne's effort that offers everyone the chance to play it in an almost "new" way. If you consider the game itself, what we have is a small masterpiece that has been able to entertain us in an excellent way with its madness, with its lore and with all its anxiety. However, when considering the "final version", the few additions and improvements are not so noticeable as to recommend the purchase to those who have already played the original. Pros and cons ✓ Incredible narrative depth
✓ Expertly crafted gameplay
✓ He knows how to be scary
✓ Exceptional technical sector x Uninteresting touch controls
x Few improvements / additions

Do you want to be a video game expert and know all the tricks, guides and reviews for your video games ? Holygamerz.com is a group of video game fanatics who want to inform you about the best tricks, guides and tips. We offer you the best information to be a reference in gaming, so here you can find guides, tricks, secrets and tips so you can enjoy your games to the fullest. Are you ready to get all the achievements of that game that you resist so much? Enter now and enjoy your favorite video game to the fullest!
Subsurface Circular Review - The Beauty of Dialogue ❯

Add a comment from Lone Survivor review: The Director's Cut