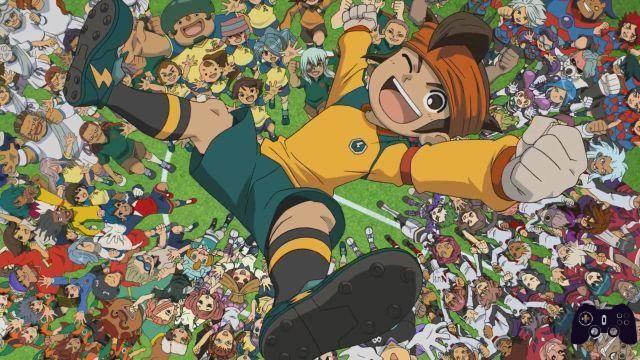 Mark, Axel and Jude are ready to drag us back to the Raimon football field. With Inazuma Eleven Strikers, Level 5 presents us with a different title, completely excluding the RPG part and the plot of the portable chapters, presenting us instead a football game outside the box, seasoned as always by the amazing techniques of the universe of Inazuma Eleven.

One goal: to become Champions!

Like any self-respecting sports game, even in Inazuma Eleven Strikers there is no trace of plot or narrative, replaced here by the "simple" goal of defeating all the other teams. So forget the intricate plots of the first two chapters (and the other three still unpublished by us) and the animated series, and get ready for a normal football game, but always outside the box.
In the Football Club mode (real Career mode) we will be able to choose a coach and a manager, and start to hire players from the first three titles of the Inazuma universe, with some bonus gems coming from Inazuma Eleven Go (fourth chapter, always unpublished by us) all in 3D polygonal graphics, with the outline of the much-loved music of the portable chapters and the dubbing in other languages ​​to which Level 5 has by now accustomed us.
As we defeat the rival teams, we will be able to sign their players (as in the portable game) and create our Dream Team which, to become truly unbeatable, will have to sweat a lot more than the canonical seven shirts.

Each player has his own set of statistics, in addition to the deadly techniques we are used to by now, and once he joins the team he can be strengthened by participating in matches and strengthening the bond with his teammates.
At the end of each race, the 11 (or more if you make changes) players will receive Bond Points, which will increase the friendship values ​​between teammates (by bringing the bond to the maximum, they will even be able to learn new amazing techniques) and Tech Points that , as the name suggests, will favor the use of special moves.
The life of the young freshmen is tough and even if getting to the end credits seems easy, the real challenge will begin later, when all the opponents have their stats at their maximum.
To get the best players, or to make ours as such, we will have to challenge and re-challenge the old opponents, even if this time we will not have an easy life on the field (if before the power-up you won easily with five goals difference, lead to home victory against the last secret teams will be much more difficult).

Winning is not that easy!

To help the opposing teams there will be a shamelessly biased referee, who will whistle fouls only against you (although he will rarely be polite and give you a free kick) and, always after reaching the credits for the first time, the Inazuma bar that allows the use of moves, and in the case of the goalkeeper prohibits the waste of Technical Points, rivals will be perpetually charged, making practically a continuous challenge to shoot at goal.
Finally, as I write this review (after 15 hours of play for now), I have never managed to score a Goal without using a special technique (except on penalties), as the goalkeeper always seems to know where the ball will go.
The only way to defeat such tough opponents is to continuously train to strengthen the bond and thus increase the skill and statistics of your Dream Team, which will take time and a lot of patience.
Fortunately, it is possible to play against pre-power-up teams, in game mode (always in Club Calcio) to be able to strengthen the players and, always after the credits, depending on the level at which we defeat the CPU, we will be given medals - and obviously more Inazuma Points - to be able to spend on hiring new talents (which obviously won't be as strong as when they played against us) or to buy items to help us during the games.

Many ways to play

Inazuma Eleven Strikers can be played with all types of Wii controllers, both with the Wiimote horizontally, with the combo Mote + Nunchuk, and with the very comfortable (and recommended) Controller Pro.
Furthermore, if we play with a friend, the latter can take the field with us but can also point the Mote towards the screen and act as a coach or manager, placing power-ups for the field (for example PT recovery zones) or increase the effectiveness of special moves by shaking the controller.
In "Friendly" and "Tournament" you can play games in co-operative or competitive, up to a maximum of four players (always in local multiplayer) and you can choose between one of the 13 teams available, or our Dream Team trained with so much effort.
If one of our friends owns the game, thanks to the WiiMote data transfer, they can bring their team to our Wii to decide once and for all who is the strongest.
The mini-games close the roundup of modes, which are nothing more than the training sessions of the Soccer Club, shown here only to obtain medals depending on the score (from bronze to platinum) and playable both in co-operation with three other friends, and with a other CPU driven player.

After this long overview of the game, it's time to make the fateful comparison between Inazuma Eleven Strikers and the chapters for DS released in our continent.
While in portable titles the special techniques followed a "Rock-Paper-Scissor" system (for more details I refer you to the review of Firestorm / Snowstorm) to be effective in Strikers, they have the element (tree-earth -wind-fire) but this is only one of the factors that will determine the success of the technique, which will mostly be based on the player's statistics: for example, even if our shot will be of the fire type, therefore we have an advantage on a parade of tree type, will not enter the goal if the opposing goalkeeper has a higher degree of parry (B) than our attack strength (C).
Strikers therefore offers a higher level of challenge than portable chapters, but the absence of the plot will probably not push the player to train even after the credits, and the consequent increase in difficulty.

Inazuma Eleven Strikers will certainly not appeal to fans of the two main football brands, unless the latter love the series and want to play a much less technical but equally fun game.
Just think that in Strikers our champions can also shoot from their own area, and the ball will automatically go towards the opponent's goal (then whether it enters or not, it's a different kettle of fish) but you know, the young talents of Raimon know how to amaze. visually.
Inazuma Eleven Strikers is recommended to all those who ask football for spectacularity and deadly techniques, which finally land on home screens, in one of the final titles for Wii.

Verdict 7.5 / 10 Are you scared, Potter? No, Inazuma! Comment As a fan of the brand, I can be satisfied with Inazuma Eleven Strikers, both as a sports title and as an appetizer of the third chapter of the main series. Finally seeing the Raimon champions in 3D is a joy for the eyes, but the lack of an underlying plot penalizes the home title, making it a Must have only for fans of the series. Pros and cons ✓ The universe of Inazuma Eleven in 3D
✓ Lots of players to hire to create your dream team x Shamelessly biased referee
x Fans of simulation soccer games will hardly like it
x It is practically impossible to score without special moves

Do you want to be a video game expert and know all the tricks, guides and reviews for your video games ? Holygamerz.com is a group of video game fanatics who want to inform you about the best tricks, guides and tips. We offer you the best information to be a reference in gaming, so here you can find guides, tricks, secrets and tips so you can enjoy your games to the fullest. Are you ready to get all the achievements of that game that you resist so much? Enter now and enjoy your favorite video game to the fullest!
News Retro Studios collaborates with the composer of Deus Ex ❯

I Am Setsuna Review