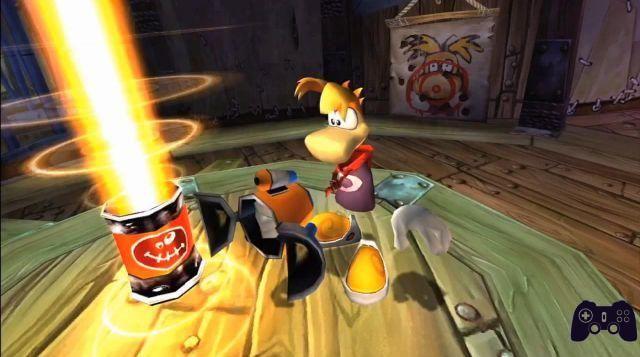 It was back in 2003 when the third chapter of one of the most famous Ubisoft protagonists of all time arrived on all the consoles of the generation: Rayman, the hero without arms or legs. Almost ten years after the original release, Rayman 3 Hoodlum Havoc returns to our high definition consoles, abandoning the subtitle to leave room for a more clear and synthetic Rayman 3 HD.

Where is my Andrè?

It's a quiet night at the Crossroads of Dreams, or at least that's what all the inhabitants think, until an evil black Lum named Andrè decides to disturb the quiet.
He wants to steal the heart of the world, in order to create a very powerful army; Rayman will immediately launch in pursuit together with his loyal Globox (the blue friend who appeared for the first time in Rayman 2, ed) who, in the midst of the chaos unleashed by the leader of the black Lums, will end up swallowing Andrè himself.
In order to heal Globox and get rid of the enemy, Rayman will have to visit doctors who specialize in magical diseases, thus begins the journey of this third chapter.

A can of detergent to rule them all

The normal powers of Rayman will not be enough against Andrè's Hoodlum army, determined at all costs to take back their boss from Globox's belly; our hero will then have to use bottles of detergent, which will allow him to transform his clothes and temporarily grant him new powers.
The transformations are five in all and range from the Red Detergent, which allows you to enhance the fists and therefore destroy the Hoodlum barricades, to the Blue Detergent, which makes Rayman able to throw chains and swing between special rings suspended in the void, passing through the Yellow Detergent. , which allows Rayman to use his helicopter ears to fly higher.
Each detergent has a different duration and effect, it's up to the player to use the cans to solve the puzzles and get more points (we will talk about the points system below), often to unlock the cans we would have to defeat groups of enemies, or free the Teen (the wizards of Rayman's universe) from the cages.

Rayman in HD… More or less.

The game has been completely remastered, and the graphic improvement is noticeable but we are still far from a perfect graphic remastering: especially in the last levels the game suffers frame drops, but it remains enjoyable and playable even ten years later.
The audio sector has certainly been remastered better than the graphic, without particular arrangements, thus maintaining the original soundtrack of the old version.

I'm sorry you made too few points!

Rayman 3 uses a point counter for every action of the player, who by killing enemies, collecting gems, and finding collectibles, will increase his score, while obviously this value will decrease in case he suffers damage, falls into the void or touches environmental dangers. By taking advantage of the cans of detergent, the points will double for the duration of the special power, another way to increase the points and defeat the Hoodlums in a row without taking damage.
By reaching certain figures we will not only be able to brag to friends thanks to the online rankings, but also unlock nice mini-games, including a fake 2D remastering of one of the levels of the first Rayman.
The most nerve-wracking part of this system is for completists / trophy-objective hunters, in fact you will need a real “points collection” strategy to be able to complete the chapters 100%.
Obviously this will not interest those who play just for the fun of it, in fact Rayman 3 HD is still fun and is almost never boring.


Many styles of play, one hero

The gameplay of Rayman 3 HD is varied and goes from the platform (which is the basis of the whole saga), to the action in the battles against the bosses, passing from the stealth phases (there is a whole world to be completed without being seen) to those driving, up to even the FPS (thanks to the Orange Detergent with which we will control a rocket, and to a mini-game where we will impersonate Razoff the hunter).
Thanks to the varied gameplay, to the jokes that pierce the fourth wall, and to the imagination of the creators of the Rayman universe, Rayman 3 HD becomes playable after ten years, both for those who could not play it at the time, and for those that they had already finished it, proving to be an excellent title in the saga.

Verdict 8/10 Armless eggplant with superpowers Comment I personally did not play Rayman 3 Hoodlum Havoc and while playing the remaster I regretted not buying it at the time. Rayman 3 HD is recommended to all lovers of the Rayman universe, both to those who have already played it, and to those who have approached it thanks to the beautiful Rayman Origins. A title that cannot be missing in your digital libraries. Pros and cons ✓ Laughter guaranteed
✓ Porting well done
✓ Varied and fun gameplay x Nervous scoring system
x Dancer camera in some levels

Do you want to be a video game expert and know all the tricks, guides and reviews for your video games ? Holygamerz.com is a group of video game fanatics who want to inform you about the best tricks, guides and tips. We offer you the best information to be a reference in gaming, so here you can find guides, tricks, secrets and tips so you can enjoy your games to the fullest. Are you ready to get all the achievements of that game that you resist so much? Enter now and enjoy your favorite video game to the fullest!
Special Dragon Ball Z- Vol.1: The evolution of the species ❯

Life is Strange: Before the Storm review - Goodbye