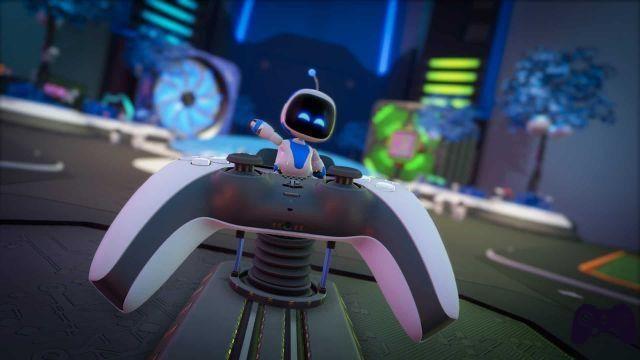 The Next-Gen is finally a reality, despite the not irresistible launch of Ps5 and Series X. The pandemic has hit companies hard, apparently reducing the stocks of new consoles at launch and, above all, delaying the development of many launch titles. I understand who has not trusted, I understand who has decided to postpone the purchase of a console waiting for the true next-gen. I also understand those who have turned their noses up at the fact that the spearhead of the PS5 launch was the Demon's Souls remake and not a new IP. The fact is that Sony did not want to invest enough in the communication of what, at the moment, is the first and only truly Next-Gen title on the entire market. I'm talking about Astro's Playroom, included for free in every unit sold of Playstation 5 and which amply justifies the purchase of a new console at launch and that marvel that is Dualsense.

Astro's Playroom is a leap into the future 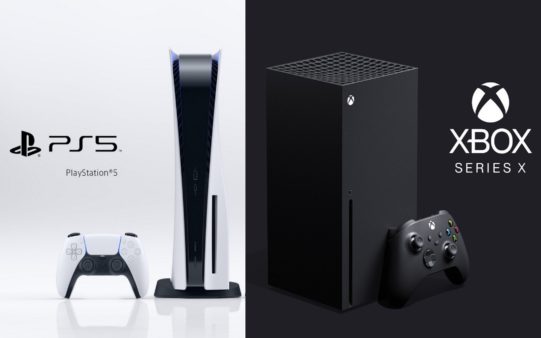 To learn more:
PS5 vs Xbox Game Pass: Are We Really Sure About That VS?

Astro's Playroom is no ordinary tech demo. It is simultaneously a window into the future of Playstation, an interactive manual of the new console and a celebration of the history of Sony consoles. A 3D platformer that draws heavily from Super Mario (sometimes in an almost brazen way) to be able to tell all the news of this ninth generation which is entrusted with the task of astounding newcomers with all the aces up their sleeves prepared by Sony for take on the next few years of home gaming. And believe me, it succeeds. With Astro's Playroom Sony has definitely changed the very concept of tech demo. Enough with the videos that passively illustrate the features, now the tech demos must be played seriously.

Astro's Playroom could have been a new The Bouncer, a launch title sold at full price despite offering very limited content. Instead, it is a reference point for the entire industry as well as a beacon of the next generation. Team ASOBI has sewn the next gen on Astro's Playroom like a tailor with fairy hands, emphasizing every novelty and building the gaming experience around each of them. In addition to being a PS5 title, Astro's Playroom is a Dualsense title. The new Sony controller is in fact central to the design and experience conceived by ASOBI.

The Next-Gen to touch

Astro's Playroom opens with a hands-on demonstration of Dualsense's features. The haptic feedback, the motion sensor, the integrated microphone and the new adaptive back triggers are activated in sequence. A nice showcase of the news of the PS5 controller and, apparently, little else. However, when you enter the game world, it impacts strongly with what is Sony's next-gen idea. We take control of Astrobot and Astrobot literally comes to life. Haptic feedback makes the differences between the surfaces we walk on perceptible. Walking on the glass is incredible. The jingle of Astro's footsteps on glass surfaces alternates with the typical feedback of metal surfaces. It is unrealistic, it is real, and it is something never seen or experienced before. 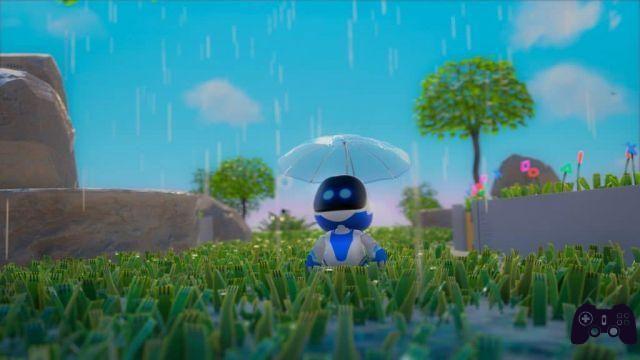 Little gem: the blades of grass are disconnected ribbon cables that sway in the wind

The four thematic levels of Astro's Playroom offer different insights into the potential of the new generation. In one of them I piloted a small spaceship with the help of adaptive triggers, in another I climbed walls thanks to the motion sensor, in yet another I stood still enjoying the rain tapping on Astro's umbrella imagining what Death Stranding would have been with the support of a peripheral like Dualsense, perfectly able to restore the feeling of every small drop of water in different points of the hands. And what about the sensation of the tall blades of grass brushing against Astro's tiny body in the levels where the vegetation is particularly luxuriant? Seeing is believing, also because in words it is difficult to explain how and how much the gaming experience changes.

An interactive museum on the history of Playstation

Astro's Playroom is a feast for the eyes and hands, thanks to a highly inspired artistic sector and the magic of Dualsense. But the experience does not end there, far from it. Astro's Playroom is also a celebration of the history of Playstation and the four generations of consoles that preceded the current one. The one packaged by Team ASOBI is a tribute to the history of the brand and to the IPs that have made it great in the 26 years since the launch of Playstation on the market. The care put into the construction of the thematic levels is astounding, and being in front of the games and peripherals of each generation of Playstation is nothing short of exciting. I had the chills in front of the PS2 power up screen or the first Dualshock. The love that every quote exudes towards Playstation IPs is simply touching. 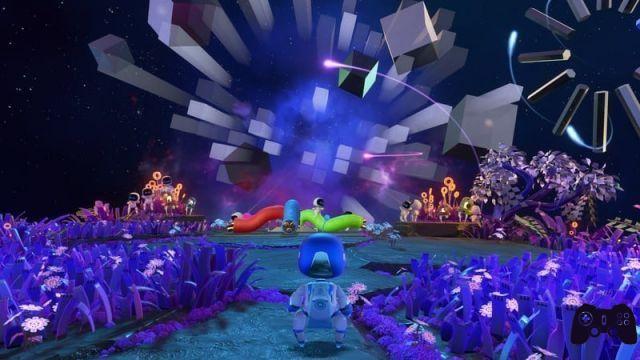 From Silent Hill 2 to Final Fantasy VII, passing through much less celebrated titles such as Vib Ribbon, Tearaway or Puppeteer (which I initially mistook for Clock Tower risking a syncope), Astro's Playroom leaves no one behind. There are so many quotes that it is also difficult to recognize them all at the first try. ASOBI, however, did not stop at just video games. In what is in effect the Playstation interactive museum called Playstation Lab, ASOBI also included unused peripherals such as Pocketstation and even the discarded logos of the first console. The care and love behind this nostalgia operation really leave you speechless.


Then comes Back to 1994, where one of the most exciting bossfights ever takes place

Do you remember Dino? Dino was the first tech demo included in Demo1, the first of the historic Playstation demo collections. At the time, the polygonal count of the model was something never seen before and contributed to making Playstation famous among professionals and enthusiasts around the world. 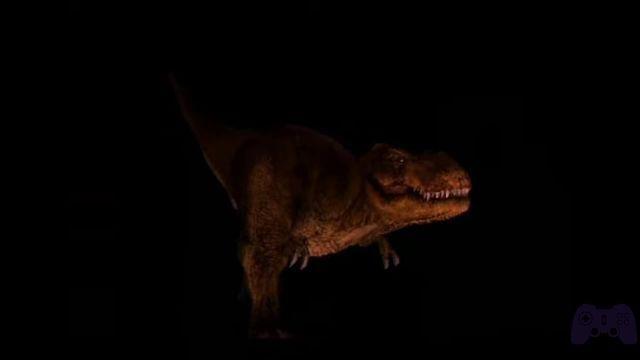 The last "secret" level of Astro's Playroom takes up the citations scattered around the game worlds and transforms it into playful language. At the entrance I found myself in front of a PS1 connected to an old CRT in a dark room. In the player is the glorious record Demo1. Just jump on the power button and the door closes, the historic PS1 start-up screen appears on the screen and a scale appears in the void. Each step is a Memory Card that literally invites us to climb our memory by taking us back to where it all began. At the end of that staircase, the final boss of Astro's Playroom awaits us. It is Dino, the T-Rex born as a Tech Demo for the first Playstation and later became an icon of the Sony console.

It's been 26 years since its first appearance. I was born only a year later, and I turned on Playstation for the first time when I was four years old. Yet in front of the screen of Astro's Playroom that narrows to return momentarily to the 4: 3 of an era that has ended for almost two decades, I could not stop thinking about everything that has happened in these 26 years. Video games have changed and I have changed, but my love hasn't changed one iota. Dino's polygons seem very few today and I have some white hair, the only meters to really measure the time spent together.

26 years of love and innovation

The latest ASOBI gem is a battle against Dino in 4: 3 and with a significantly lower number of polygons on the screen than we are used to, and it is one of the most sincere and powerful declarations of love for Playstation that you can imagine. Astro's Playroom puts us in front of history and makes us feel it in our hands thanks to Dualsense. I assure you, it is an incredible experience that no one should give up.

To this is added the collection around the collectible maps to be transferred within the Playstatio Labo. Here you can interact with a gashapon to obtain artifacts and pieces of the puzzle / mural surrounding the laboratory. The idea of ​​being able to interact with the artefacts exhibited in PS Labo is also very nice. Astro's Playroom is therefore both a celebration and a museum of Playstation, as well as a leaflet of the next-gen and Dualsense. It's been 26 years since we first turned on a Playstation, and retracing them pad in hand in this way is perhaps the best approach to what awaits us in this ninth generation of consoles.

Astro's Playroom had a specific task: to prepare the way for the new generation. Did he succeed? And how. Detaching from Dualsense becomes complicated, it is a frontier that once conquered makes everything that came before almost obsolete. Even Demon's Souls itself, as beautiful as it is visually, looks a little older than Astro's Playroom, especially since what is missing is that kind of implementation of Dualsense features.

May Astro's Playroom be the beginning of something great and that it can collect the heavy legacy of these last four generations. In the meantime, we already have a way to make our mouth water. The premises are exciting.

Good real next gen at all.

Verdict 9.5 / 10 Borrowing from Super Mario to tell PS5 seems like a paradox, but ASOBI really succeeded. Comment Astro's Playroom is many things: an interactive museum, a Playstation 5 leaflet and an absolute celebration of the potential of Dualsense. Being able to perceive the texture of the materials you step on or the gentle roar of rain on Astrobot's umbrella is part of what appears to be Sony's next-gen idea: complete immersion in the game world. Wonderful in the sweetness with which he tells 26 years of Playstation, very inspired in the creation of thematic game worlds, very funny in his continuous search for goodies and easter eggs. Astro's Playroom is the largest Next-Gen experience on the market to date, and it's free within every PS5 unit sold. Not to be missed, precisely because once you get your hands on Dualsense it is very difficult to go back. Not a "trivial tech demo" but one of the main reasons to spend the money and take home a PS5. Pros and cons ✓ The implementation of Dualsense
✓ Playstation's 26-year celebration
✓ First and only Next-Gen experience on the market x Getting away from it is really difficult
Do you want to be a video game expert and know all the tricks, guides and reviews for your video games ? Holygamerz.com is a group of video game fanatics who want to inform you about the best tricks, guides and tips. We offer you the best information to be a reference in gaming, so here you can find guides, tricks, secrets and tips so you can enjoy your games to the fullest. Are you ready to get all the achievements of that game that you resist so much? Enter now and enjoy your favorite video game to the fullest!
Assassin's Creed Syndicate Preview ❯

Add a comment from Astro's Playroom review: the first game for Dualsense