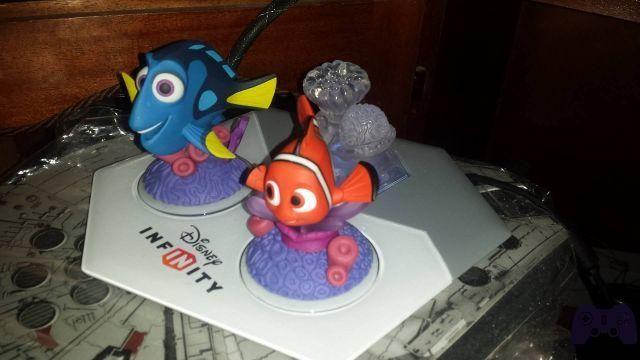 Life teaches us that sooner or later everything ends, be it these series of success or ignoble creations, and sometimes it is not enough to produce quality products to be able to continue on one's path. The announcement of the closure of Avalanche and the consequent end of their most successful product took us by surprise last May, especially after the three excellent Play Sets dedicated to the world of Marvel, Inside Out and The Awakening of the Force. The cancellation of all future expansions, of what was one of the most famous Toys to Life (for the brands present) and of quality (for the actual excellent workmanship of the figurines) could only leave us perplexed upon arrival in the shops of the last (in every sense) Play Set of Disney Infinity 3.0 dedicated to the next Pixar film Looking for Dory.

As with Marvel: Battlegrounds, the playset of Looking for Dory contains Dory and the game world, and is sold at a starting price of € 29,90, while the Nemo statuette is stand-alone, at the classic price of € 14,98.

Shut up and swim, swim and swim

Similarly to what happened for Inside Out, the Play Set of Finding Dory takes place after the events narrated in the film out next September 15th. Fortunately, the only spoilers on the film are to be found in the presence of the new characters and in the location of the Oceanic Park (henceforth PO as defined in the game). Dory, Marlin and little Nemo discover that some fish will be thrown into the drainpipes to feed the ferocious seagulls: as if that were not enough, someone has released dangerous aquatic toys inside the three main areas of the PO, putting the fish in further danger. . Dory and Nemo thus decide to venture among exhaust pipes and touch tanks to gather all the fugitives and lead them to Morro Bay for a happy life. The entire Play Set unfolds in twelve 2D scrolling levels and in the large 3D hub of Morro Bay, where you can swim to your heart's content and complete side missions. To complete the rescue of the fish it will take about six hours (as per the average for the expansions of the brand) that passing genuinely having fun thanks to simple mechanics suitable for all types of players.

Go with the flow

As already happened both for Marvel: Battlegrounds that for Inside Out, also in Looking for Dory Avalanche has tried to vary from the now too overused formula of the Open World, providing a very simple and easily re-explorable metroidvania with the available upgrades. Dory and Nemo will have to swim among currents, toy fish and the hands of intrusive children, to reach every nook and cranny of the tanks and save the greatest number of fish from the drains. Beside them in addition to the basic attacks (a bubble to hit switches and englobe enemies, and a flick to launch projectiles and destroy obstacles) three small animals, which will be in all respects the power-ups to explore inaccessible areas: the shrimp will eat the algae that will obstruct the paths, the hermit crab will allow you to challenge the currents and finally the cuttlefish will shed light in the dark areas. Each of the three upgrades is entrusted to a button of the directional cross, and can be activated at any time once obtained, and can be improved by fulfilling specific missions in the 3D hub, by the end of the game you will have access to each area and collectible, being able to complete each area to the maximum and receiving the appropriate prizes to beautify Morro Bay. 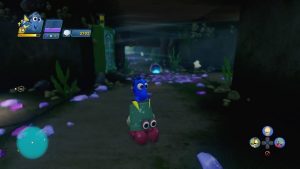 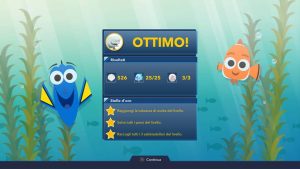 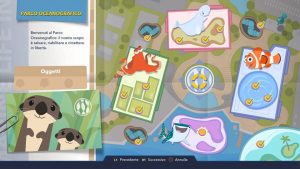 The level design is simple and suitable for children, and in addition to not hiding too many secrets, once the radar in Morro Bay is unlocked, any extra research can be seen in the mini-map at the bottom left. The Play Set is never difficult but manages in any case to entertain with some nice ideas and with a variety between the three areas in which the player (small or large) will have to act in different ways: in the quarantine area we must be careful not to be illuminated by the torches of the keepers, in the tactile tanks you will have to swim quickly so as not to get caught by the children, while in the exhibition area you will have to use the currents correctly. Like practically every episode of Disney Infinity, Finding Dory also tries to stimulate the ingenuity of the little ones by guaranteeing them good fun with the Disney / Pixar heroes.

I found you! Did you find me?

Finding Dory obviously uses the same graphics engine as Disney Infinity 3.0, giving a toy version of the characters from the world of Nemo. A valuable job has been done with the modeling of water and marine elements, with a single negative note rising to the surface in the 3D hub where the ripples turn into very ugly polygons. The dubbing is entrusted to the original voices of the two films and proves to be of excellent quality like the rest of the production. Nothing to report regarding the quality of the miniatures which, for the last time, bring an excellent level of detail to the shops and an inevitable addition to the fan collections.

Verdict Yes Talking Balenese Won't Save You Comment Finding Dory offers a handful of hours of fun and exploration of the Pixar seabed with a successful visual sector and the original dub of the two films. Despite this, writing to rush to buy the Dory set at full price, even if you are a fan of little Nemo and his friend, would be quite unfair: the playset has fun for the six hours it takes to complete it, but with the closure of Avalanche it is The cost of the product may drop shortly. Qualitatively, Finding Dory keeps up with the standards of the other Infinity 3.0 Play Sets, genuinely amusing audiences of all ages. An excellent farewell to the brand that has accompanied Disney fan collectors for the past three and a half years. Pros and cons ✓ Simple mechanics suitable for everyone
✓ Original voices
✓ Worthy farewell to the brand x Price perhaps too high
x Short term