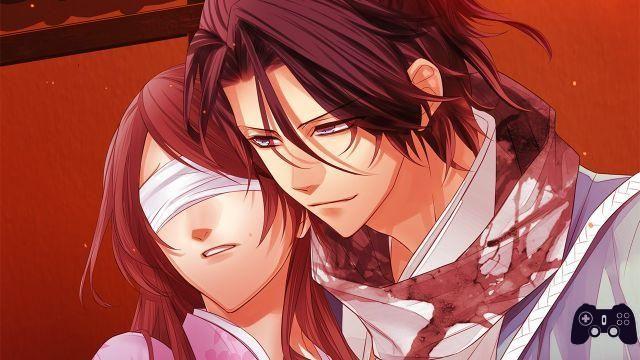 The Amazing Shinsengumi: Heroes in Love was born as an iOS and Android title developed by Dogenzaka Lab which proposes some romantic stories with the addition of content that is forbidden to minors with the five famous captains of the group Shinsengumi. Released on the mobile device market in April 2015, the title landed just over a year later on PC via Steam at a price of € 15,99. Will he have convinced us? Find out by reading the next lines.

I only have eyes for you

The Amazing Shinsengumi: Heroes in Love is one very simple visual novel, linear and not dubbed which revolves around the historical event known as Ikedaya Incident. During the night of July 8, 1864, the special police of Bakufu, or the Shinsengumi, broke into Kyoto's Ikedaya Inn to kill and arrest mercenary samurai hired by pro-imperial clans Choshu e Tosa. This story has often been represented in the world of anime, manga and video games and, in the case of this branded title Dogenzaka Lab, we see her fictionalized in a romantic novel in which she plays the part of a protagonist (whose name we can choose) who will witness the burning of her home and will be saved by the Shinsengumi: the commander Kondo Isami, in agreement with his deputy Hijikata Toshizo, decides to take the girl to the base, letting her choose one of the five captains who really existed among Okita Soji, Nakagura Shinpachi, Saito Hajime, Harada Sanosuke e Todo Heisuke, to take care of her. In reality, in the story exactly the opposite happens, since the girl offers to take care of the housework and to cook in the base, becoming in effect the lover of one but the housewife of all.

As the story continues, she will discover who her heroic Shinsengumi are frowned upon by the local population since they were pointed out as murderers, a fact also confirmed by historians. Such special police are simply in the service of the Shogunate and as such he carries out any order from above, even if not in line with the personal ethics of the members: in any case he does not only deal with killing, but also with helping the population if needed, especially by supporting the firefighters extinguishing fires, very frequent in this story. Each route describes the same events from different points of view, making it even more fun to play romance with each character to discover more and more details about this high-impact historical event. The very interesting thing is that each captain reflects some of the characteristics that historians are aware of, such as Soji's health condition, Hajime's introverted character, Heisuke's forehead wound the night of the accident and many other details.

It sends shivers down my spine

The storyline is great, interesting and enjoyable, but it removes the fun of choice

In classic visual novels like this one, you spend all your time a read the dialogues between the characters and the action descriptions made by them. The game can be fully controlled thanks to mouse and keyboard, which allow you to advance in the text, open the menu, activate a fast forward function of bars already read, turn off the background music (highly inadvisable choice), to modify various text settings and to switch from full screen to window and vice versa. Are available five routes lasting a couple of hours each consisting of 7 chapters, a sequel and a given scenario. Any plot undertaken can culminate in three endings, namely Ignition, Embers and Crimson, obtainable by bringing the percentage of affinity respectively to around 20%, 40% and 100%, for a total of 15. The Amazing Shinsengumi: Heroes in Love proposes one excellent plot, interesting and pleasant, but taking away the only fun that this type of title offers the player: the possibility of witnessing changes in the plot according to the choices made. Unfortunately in this case the choices have the only function of increasing or decreasing the likeability percentage necessary for the setting of the ending, but, apart from a few different lines pronounced from time to time, the story will always unfold in the same way, differing only at the epilogue, with no possibility of escape. This means that if the player decides to treat one of the captains badly on purpose, they will still love the protagonist unconditionally, they will in any case become more and more intimate and the story will inevitably culminate in one or more sexual acts in the course of the plot. This can be considered a bit annoying by those who habitually play visual novels that offer multiple endings which are reached through totally different stories, since it is created a feeling of lack of content. Unfortunately it is really a shame, since with such a famous historical event to make the plot interesting in itself, it would have been nice to focus on the also develop scenarios in which the captains would not want to have anything to do with the protagonist but, suddenly finding it between head and neck, they end up falling in love with it slowly. The routes instead they differ mostly in the characters of the characters, as they are all happy to welcome any commoner woman who has just been saved from a fire into their rooms.

The price of 15.99 € is not justified since it is a game developed for mobile ported to PC, in which the only entertainments are made up of texts and plot and both show some flaws that cannot be overlooked. In some places of the bars there are some errors or words that remain stuck together, in one route we also found an English text with the character's name in Japanese. Finally, there are some modern references that should not be contained within a title set in the Edo period: for example, the protagonist names the CPR, a name that was officially born only in 1960 (almost 100 years later) but which, in any case, any commoner of the 1800s should not know and , elsewhere, reference is made to an “X-Rated” conversation, also this modern term. To ask for this figure for a linear title lasting a few hours from a technical point of view, it would be necessary to at least be close to perfection.

Extremely low system requirements and virtually nonexistent system performance impact make it The Amazing Shinsengumi: Heroes in Love suitable to be played on any type of machine able to install a version of Windows from 7 onwards. The game proposes a resolution 1280 x 720 with Consistent 20 FPS which are not a problem since there are no animations or transitions whatsoever.

I'm the leader of the Shinsengumi first, and a human second

The Amazing Shinsengumi: Heroes in Love presents a character design suitable for the female target it is aimed at, with characters well drawn and reflecting the predominant traits of their character. The settings help to create an atmosphere in keeping with the Edo period and, although the backgrounds are few, with tricks such as i changes in color and light you can reuse them several times without them becoming heavy or repetitive. The background music is reminiscent typically Japanese instruments and accompany the player in this historical-romantic adventure. The only flaw is that when a scene with more stringent contents is presented, the same song is always used, perhaps reaching a spoil the surprise effect a little as the music almost acts as a wake-up call for red light themes. As mentioned above, the texts are clear and well presented, but have some typos and technical errors that could make the most demanding players turn up their noses.

Verdict 7/10 It's my way of expressing my love. Comment The Amazing Shinsengumi: Heroes in Love is a very linear and simple visual novel that proposes an exciting plot based on a historical fact that really happened in the Ikedaya inn. The protagonists trace historical details and details that make fans smile, but the errors contained in the texts and some off-topic jokes could instead upset those who are particularly demanding. The fact that the choices do not affect the progress of the story could be frustrating, but at least it makes replayability to unlock all the endings quick and efficient. The visual novel is particularly pleasant and exciting, but the purchase is recommended only at a reduced price. Pros and cons ✓ Plot based on real facts
✓ Follow historical details
✓ Attractive character design
✓ Charismatic characters x Excessive price
x Irrelevant choices
Do you want to be a video game expert and know all the tricks, guides and reviews for your video games ? Holygamerz.com is a group of video game fanatics who want to inform you about the best tricks, guides and tips. We offer you the best information to be a reference in gaming, so here you can find guides, tricks, secrets and tips so you can enjoy your games to the fullest. Are you ready to get all the achievements of that game that you resist so much? Enter now and enjoy your favorite video game to the fullest!
Luigi's Mansion preview - Return to the haunted mansion ❯

The Walking Dead-A New Frontier: Above The Law review

Add a comment from The Amazing Shinsengumi: Heroes in Love review