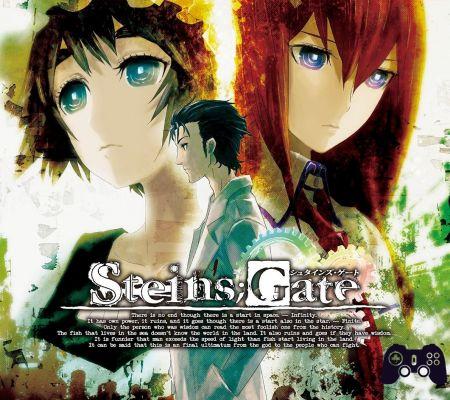 Steins; Gate is a visual novel born from the collaboration of 5pb. e Nitroplus and is the second title in their Science-Adventure series, ranking somewhere between Chaos; Head e Robotic; Notes. Among the various products dedicated to the series we find a manga and anime adaptation, several spin-offs in the form of manga, three drama CDs, a film and a board game that follows the card game Rai-net Access Battlers present in history. The only one sequel direct was announced under the name of "Steins;Gate 0”And will soon be available on the shelves. Initially published in Japan on Xbox 360 in 2009, then landing on PC, PSP, PS3, PS Vita and Android, in 2015 the visual novel finally crossed the territorial boundaries to arrive on PS3 and PS Vita and, finally, on PC means Steam on 9 September 2016 at a price of 31.99 €. Will he have convinced us? Read on to find out.

It's the choice of Steins Gate 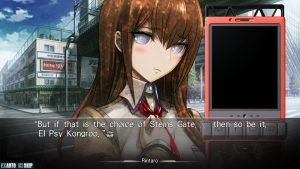 Steins; Gate is set insummer of 2010 in a Akihabara fictional overflowing with Japanese otaku culture in which the protagonist Rintaro Okabe and her childhood friend Mayuri Shiina they are headed for a time travel lecture given by an esteemed professor. At the meeting place they meet the genius Makise Kurisu, found murdered at the end of the event. Rintaro hurries to escape and to warn his friend Itaru “Daru” Hashida via an email sent from a mobile phone (in Japan mobile phones send emails and not text messages, ed.). Pressing the enter key, Okabe feels a very strange sensation and witnesses the disappearance of all the people around him in Akihabara. Having found Mayuri, the two return to Future Gadget Lab, a place where Rintaro and Daru invent gadgets of questionable usefulness, to work on the latest project: a remotely controlled microwave that, via a phone call, can find the heated food ready once they return home. As is often mentioned in the game, it is from failures that the most sensational discoveries arise: this microwave in fact is not only able to reheat meals, but in some way can send "D-Mail”(The D stands for DeLorean) in the past to alter the present. Other characters will soon be added to the group, including the "revived" Kurisu, the androgynous Luka Urushibara, the mysterious Kiryu Moeka who communicates only through bursts of mail, the maid and champion of a card game Faris NyanNyan e Suzuha Amane. Their experiments to see how far they can go with change will soon get out of hand as the boys find themselves entangled in a conspiracy surrounding the SERN e John Titor, which declares on a board similar to Reddit e 4chan called @channel to have come from 2036 to try to change the dystopian future from which he comes: a world governed by SERN that is based on perpetual peace where, however, no one is free. Kurisu will be able to modify the PhoneWave to also send the memories of a subject in the past and Okabe will find himself having to travel through the timelines to unravel the problem and try to save what is dear to him.

This is only the beginning of the articulated and complex plot by Steins; Gate, distributed over five introductory chapters and six more dedicated to a different ending each. The story at first proceeds very slowly and gradually, taking the time to introduce each character and walk the player through the mix of science fiction, technology, time travel and otaku culture thanks to a glossary integrated very well in the visual novel. Some of the topics covered are a bit complicated, so the title often leverages the ignorance of characters like Mayuri to make the explanations of Okabe and Kurisu easier, through comparisons and practical examples that make everything understandable even to those of the all lacking in scientific skills. Those who have a lot of previous knowledge will certainly have an advantage and will often find themselves grinning, evaluating if their knowledge actually coincides with the theories proposed by the characters or if it will be the case to re-evaluate what has been learned in favor of new food for thought. The constant references to facts, events, people and places that actually existed or happened (John Titor in primis) contribute to making the Steins; Gate experience more realistic and culturally enrich player.

If you can grit your teeth during the introductory phase of the game, the visual novel will give us a wonderful story, full of unforgettable characters, twists and moral slaps continue that will immensely reflect on how short the time spent with loved ones is and how dangerous a technology such as time travel is, even if the changes made are apparently small and insignificant. Basically, Steins; Gate is the story of a boy who finds himself in the hands the power of a god and, trying in vain to oppose the will of the universe, he realizes that he is, in fact, only a man. Steins; Gate is not just a game, but a real life lesson. 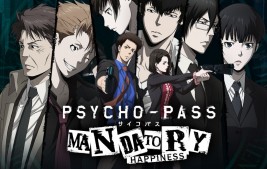 This visual novel has the merit of being very long-lived, since offers between 30 and 50 hours of gameplay depending on the player's reading speed: as is often remembered, this genre is often recommended only to enthusiasts or to those who are not afraid of mountains of text to read and are curious to try one. The only interactions with the title occur through the system Phone Trigger which leads the player to interact with Rintaro's cell phone, thanks to which you receive emails and phone calls from the various characters to which you can decide if and how to respond. Each choice will have repercussions on the plot and will allow you to watch different scenes and, if you make particular decisions, you will be able to access the True Ending. As in any self-respecting visual novel there are some essential functions, such as automatic reading with the possibility of adjusting the speed, a fast forward feature to skip the text already read (very useful when working to unlock endings, elements CGI o achievement which involve playing certain parts of the game again), the ability to read the backlog in case you miss a joke and the menu can be called up with a simple click of the mouse. L'interface is clear and the keys to remember can be counted on the fingers of one hand.

As for the technical side, i Steins; Gate requirements are slightly higher to those of most visual novels but will reward you with an experience a 1080p with Stable 60 FPS even when using the fast forward. As there are no animated sequences apart from the opening, the title can also be played with particularly low performance, as the RAM and, to a lesser extent, the memory will be affected by the whole machine: the important thing is to meet at least the requirements for opening. of the game. Finally, remember that it is possible to play both with mouse and keyboard and with the aid of a controller and both configurations are comfortable in the same way.

Steins; Gate proposes a character design in a rather modern anime style with some notes that help to make it unique, such as the delicacy in the representation of the eyes. The landscapes follow quite faithfully places that really exist such as the Akihabara station or the Radio Kaikan building (you can see a comparison in the gallery below), proposing them in various colors to emphasize the passage of time and not make them repetitive.

The soundtrack composed by Takeshi abo he is exceptional at creating moments of pathos, as if pressing keys directly into the player's head to create music that is always adequate for the occasion. The strong point are the particularly melancholy pieces that have the effect of making to tighten the heart and more than once they manage to tear a few tears in the event of particularly sad endings, guaranteeing their effect in the event that the spectator was very emotional. Fortunately, the more lighthearted tracks lift the spirits and help to face the game even with the right amount of humor, especially thanks to the monologues of Rintaro with his crazy mask of Hououin Kyouma.

Talking about the English localization one can only praise the excellent work despite the absence of other languages ​​other than English and Japanese, which however may discourage overseas fans who do not understand them. Fortunately there is a dictionary included in the game which explains the more complex or weird terms to players, but one is still required good knowledge of English to fully appreciate the contents of this title. The dubbing is present only in Japanese but it is worth it because the particularly apt voices expand the personality and characterization of the characters to which they refer, making them alive and true on the screen.

Verdict 9/10 Someone send a D-Mail to erase this game from my head! Comment Steins; Gate launches the player into a particularly credible world composed of a skilful mix of science fiction, time travel, friendships, joys, pains, fears and ambitions, created to open our eyes and highlight some simple truths that force us to lose ourselves. discussion as human beings. Resisting the slowness of the first chapters will allow you to savor an incredible plot that will no longer allow you to see the world in the same way, deeply marking and enriching the viewer both from a cultural and emotional point of view. Recommended for fans of visual novels who have not yet had the opportunity to play it and for those who are approaching the genre for the first time and are looking for an adventure with a strong impact. To be avoided if you don't know English or can't stand reading. Pros and cons ✓ Plenty of twists and moral slaps
✓ Wonderful and exciting story
✓ Impact characters
✓ Memorable OST
✓ Important life lessons x Only in English
x Slowness of the first chapters
Do you want to be a video game expert and know all the tricks, guides and reviews for your video games ? Holygamerz.com is a group of video game fanatics who want to inform you about the best tricks, guides and tips. We offer you the best information to be a reference in gaming, so here you can find guides, tricks, secrets and tips so you can enjoy your games to the fullest. Are you ready to get all the achievements of that game that you resist so much? Enter now and enjoy your favorite video game to the fullest!
News Downswing: Crazy Machines 2 ❯