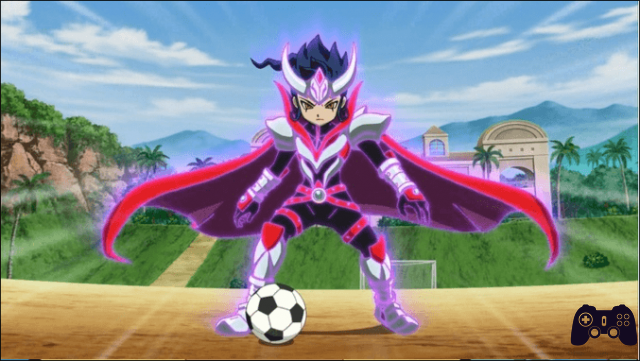 While on television screens it is broadcast in first viewing Inazuma Eleven GO Galaxy, on March 27th 3DS will welcome two new titles of the brand, dedicated to the second chapter of the Arion Sherwind trilogy, available both in physical and digital version via eShop, the time has finally come to talk about Inazuma Eleven GO Chrono Stones: Flame and Thunder (Chrono Stones Flame / Thunder).

Three months have passed since the new Raimon Eleven, led by Arion Sherwind, triumphed in the final of the Imperial Way, and the young protagonist returns to school after a holiday dedicated to the sport he loves.
On his return to the benches he notices that all his teammates do not even know what football is, indeed it seems that this no longer exists. While wandering in search of answers, Arion is approached by Alpha, captain of the Omega Protocol, a team serving the Eldorado, an association of the future that wants to remove football from the history books.
In a succession of events, with a fast pace, Arion will find himself facing the organization alongside Fei Rune e Wonderbot, two time travelers who like him want to save the game of football.

a journey through time to save football

Recovering the memories of the Raimon, the team will travel aboard the historic minibus in the various eras, to compose the Invincible Team and put an end to the threat of the El Dorado.
As per tradition, this is only the beginning of the plot of this fifth chapter of the Level 5 football series: between more or less predictable twists, necessary defeats, spectacular power ups and deserved victories, this new adventure of the Raimon boys will keep you committed for more than 35 hours (just to complete the main story) and then move on to the full-bodied post-game made up of matches and recruitments that characterizes each release.

This time the guys from Raimon don't just travel around Japan and the world, but embark on a journey through different historical eras to gather the spirits of the Invincible Team (we'll explain what they will be for shortly): from Japan in the Edo period, to that of Shinsengumi, from the France of Joan of Arc to the China of the Three Kingdoms, up to playing against dinosaurs in the Creataceo and having lunch around the round table of King Arthur.
In this fifth chapter of Inazuma, Level 5 has focused on environments, offering the player in addition to the usual delimited areas full of NPCs and collectibles also an "open world" map (in France, in the Cretaceous and in the United Kingdom) that remembers the distant that of Ni No Kuni, the whole is only a draft but it infuses a drop of novelty to the brand.
The game of football continues to be the master in every dialogue, often resulting in situations bordering on the comic and paradoxical, as is now the tradition of the series.

The improvement we needed

Being Chrono Stones Flame / Thunder the fifth chapter of the series we preferred to focus only on the numerous innovations introduced in the gameplay, leaving you the pleasure of returning to read the old reviews, or simply that of Inazuma Eleven GO Light / Shadow for the basic mechanics of the Football RPG by Level 5.

The gameplay of Chrono Stones is practically unchanged compared to the first chapter of the new trilogy, with players scattered around the game areas just waiting to challenge Arion and his team in 5 vs 5 mini-games: the first big difference with the other chapters is the he objective to complete these challenges which becomes simply "Score a Goal", furthermore the AI ​​of the opponents has been slightly improved and most of the time to score the decisive point it will be necessary to use special techniques.

In the basic gameplay (both challenges and real matches) three new mechanics have been added to take into account: the dribbling, that is, every time two or more players cross their feet, you can choose whether to go right or left, if they turn in the same direction the classic clash of values ​​will start; the normal chain shot, after performing a pass in the area you will have two options for the attacker, header / overhead, in order to combine the attack values ​​of the two players and therefore have more hope of scoring; finally the most succulent novelty, the Stun bar of the goalkeeper, which will fill up with each shot received, and once at most will guarantee a safe goal even if the statistics are contrary, this last mechanic allows the player to face even the goalkeepers of the postgame without becoming demoralized at every shot (normal or special that is ) failed.
These novelties in the gameplay make the whole more dynamic and fun, making it Chrono Stones the title of the most complete series under this point of view.

The Inazuma Eleven series has always stood out not only for the unusual gameplay of a football role-playing game, for the fantastic special techniques of the players, which in each chapter become more and more spectacular and on the borders of physics and reality. Warrior Spirits introduced in Light / Shadow in Chrono Stones we find two new power ups, also limited as the spirits, to a maximum of three at the same time.Many of the protagonists will be able to count on the Armor of the Warrior Spirit: if in the last episode Level 5 made the verse to the Stand of Jojo, in Chrono Stones no less than i Knights of the Zodiac (or Saint Seiya 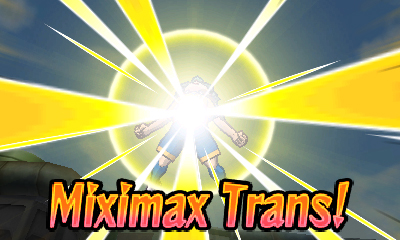 for purists) with armor that covers the players' bodies and gives them great physical power but, as for the spirits, this power up will also have a time limit, forcing the player to decide the right time to use them.
The second enhancement available in Chrono Stones is closely linked to the plot, the purpose of Raimon, as we said a few lines above, is collect more spirits strong in the various historical periods to form the Invincible Team.
To do this, they will have the MixiMax Trans, a special enhancement that allows you to merge the power of a character with one of our players.
To avoid advances on the plot, we will not reveal who they will merge with, but among the characters recreated by Level 5 stand out figures such as Joan of Arc, Nobunaga Oda, a Pterodactyl and even King Arthur, also after the third chapter you can perform the MixiMax Trans even with newly recruited players, as long as their level is above 25.
The MixiMax (also limited to 3 at the same time and with time) guarantees the player who receives the spirit the techniques of the other character and the hidden qualities, as well as an increase in statistics: unfortunately, to "mix" the main characters with each other you will have to wait the conclusion of the story.
Both the new power-ups give a fresh air to the gameplay, stimulating squad strategies and enchanting with Invincible Squad Special Tech animations, a welcome addition to the already rich control system.

From the visual side, in addition to the excellent work done with character design and animations of the special moves, the technical side remains practically the same as Light / Shadow: 3D polygonal models framed from above with a bird's eye camera, with the option of being able to rotate the camera thanks to L and R (also present in the last chapter but not highlighted on the screen), with 3D active we find frame drops again during the techniques and the evocation of the Warrior Spirits.
During the animated scenes there is again greater care than the cartoon that aired last season, even if due to the same the player is forced to face the title with the European adaptation of the names of the characters, which are often "out character" and make the whole game much more childish.

The soundtrack is among the best of the series

Fortunately, where the quality is lost with the names, it is filled with the texts on the screen and the splendid Spanish dubbing that can boast names of the caliber of Pietro Ubaldi, Davide Garbolino and the inevitable Renato Novara.
The soundtrack is one of the best of the series, with extravagant songs and pressing music or suitable for the era in which the Raimon boys perform their deeds, there is no shortage of historical songs of the brand, which accompany the player during the challenges and matches .
Chrono Stones supports Streetpass and Spotpass, in the same way as in previous chapters, guaranteeing challenges with the players met and free downloads of new exclusive characters (including Vladimir Blade), techniques and warrior spirits; the differences between the two versions also concern the usual characters (Sol in Flame and Baylong in Thunder), warrior spirits and techniques, but all the exclusives can be exchanged once the main story is completed.

Verdict 8/10 Burn my Cosmo to the outer limits ... ah no. Comment Although everything revolves as usual around the importance of football, sometimes even in an exaggerated way, Chrono Stones is enjoyable and inevitable for those who already know the series. The main characters, old and new as they are, are able to fully convince both for character design and for their colorful personality; even if in this round the absolute protagonists are the Power Up: Armor and MixiMax make the game more chaotic and fun, and each new power strengthens the bond between the player and the characters. Unfortunately, some defects still remain, such as a little variety between the secondary characters and a post-game dedicated above all to lovers of the series but, this time, the improvements to the gameplay are greater than the imperfections, and make Inazuma Eleven Go Chrono Stones Flame / Thunder an excellent portable title in these first months of 2015. Pros and Cons ✓ Well characterized characters
✓ New mechanics well integrated
✓ Valuable soundtrack
✓ Excellent Spanish dubbing x Little variety in secondary players
x Some frame drops with 3D active
Do you want to be a video game expert and know all the tricks, guides and reviews for your video games ? Holygamerz.com is a group of video game fanatics who want to inform you about the best tricks, guides and tips. We offer you the best information to be a reference in gaming, so here you can find guides, tricks, secrets and tips so you can enjoy your games to the fullest. Are you ready to get all the achievements of that game that you resist so much? Enter now and enjoy your favorite video game to the fullest!
Special Nintendo Showcase 2017 ❯

Maquette review and the recursion of life