Call of Duty: Modern Warfare, guide to the best weapons to win

War is always war. Going there with a blowpipe or a slingshot and believing you are making a killing is not exactly the best. Knowing what war equipment to have and how to unlock it is essential for survival in the first few hours of the game. Let's take a look at the best weapons in Call of Duty: Modern Warfare from the beginning, or almost, to be able to get by in many of the thorny situations of the new Infinity Ward title.

We start from the idea that all the weapons in the game can be divided into a special "Tier" based on different characteristics such as handling, damage, reload speed, rate of fire and magazine capacity. The mix of these aspects gives us an overall evaluation ranging from C (poor) to S (excellent). The weapons that we are going to analyze are some of the Tier "S" and "A" We have classified them according to 4 fundamental peculiar characteristics:

Versatility The best weapons must allow the player to adapt to any situation, be it long or short range combat. They must know how to adapt to any circumstance.
High damage or rate of fire The best weapons in the game must certainly do a lot of damage but also be able to guarantee bursts of shots with high rates.
High accuracy or low recoil A great weapon must not only do a lot of damage, it must also be able to give the safety of the shot.
Easy to use In the last section of the article, we will select weapons for ease of use. These weapons must give newbies the opportunity to be competitive immediately.

Unlocked at level 6
A reliable assault rifle, easy to use, accurate and with an excellent rate of fire. One of the rifles that a novice should immediately learn to use to be able to understand the basic mechanics of the game.

Unlocked at level 1
It has a high rate of fire. Less performing than the M4A1 but more manageable. This weapon is unlocked immediately and can be useful at any level you are.

Unlocked at level 12
The MP5 is a stable and accurate short-range weapon. It has good DPS (Damage per second) damage which makes it great for small maps. It also has a large variety of accessories to increase its effectiveness.

Unlocked at level 54
Surely a weapon with a high rate of fire and very controllable, it can even kill an enemy who has already hit you with the first shot. Excellent in seek-and-destroy and free-for-all modes.

Recommended accessories:
- Corner Kick: Increases mobility for horizontal recoil control.
tip: As it is not an unlockable weapon at the very beginning of the game, we show you a way to get it much sooner. Complete the simple Training Camp mission. This will give you the "Perforator" card to use in the armory to get the MP7.

Unlocked at level 1
This sizeable weapon has a very good rate of fire and accuracy for a light machine gun. It can be used in search and destroy with good settings. it is obtainable immediately and by upgrading it it is really useful even later in the game.

Unlocked at level 17
Effective double at both medium and short distance. Guarantees a lot of kills when playing in games with small maps and domination.

Unlocked at level 1
A sniper rifle that can "oneshot" opponents of practically any level, even having a low rate of fire. A weapon that can shine in maps with generous elevation gains that make it easy to aim through docks, but requires good dexterity to tame.

Let us know in the comments if this guide was useful to you and how you customized your first weapons. 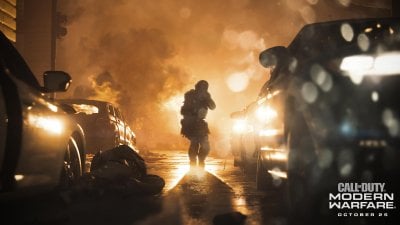 add a comment of Call of Duty: Modern Warfare, guide to the best weapons to win