Fortnite: where (and how) to find Venom and Carnage

Two ugly thugs, as symbiotic as (not very) nice, roam the island of Fortnite: here's where (and how) to find Venom and Carnage

Each season of Fortnite, since the days of Top Secret, has included an additional skin to make the Battle Pass more appealing, and this time it's the turn of Carnage, or “how Venom, but even worse ": do you know where to find the character? There are actually multiple answers to this question, because it depends on the context in which you are looking for this lovable (?) Depraved. Rejoice: we are here to help you, because although the season is entering its final month, the character remains one of the main worries of the players. The living carnage lurks in two different contexts of the Epic Games battle royale: let's go find it!

But who are they?

Since these two characters from the Marvel universe could be new to Fortnite players, we allow ourselves a little stop: before telling you where to find Venom and Carnage, we explain in broad terms who I am. The first of the two dates back (technically) to Secret Wars, one of the first great crossovers of the publishing house together with Il Guanto Dell'Infinito. The alien planet Battleworld, conceived by the almighty Arcane, was the scene of the first encounter between Peter Parker and a mysterious sticky substance that coated his body, recharging his reserve of artificial cobwebs. The iconic black Spider-Man costume was born.

During the events of the main warhead, Spider-Man was being adversely affected by the costume: being a living creature (a symbiote), the parasite was taking over. With the help of the Fantastic Four, Peter learned the suit's weakness for loud noises. Drifting from the same bell tower where Spider-Man managed to stun him, the costume found refuge on Parker's vengeful rival in the field of journalism, Eddie Brock. Venom was born. Carnage, for its part, is the result of the union of part of the symbiote with a person already unbalanced of his own, the serial killer Cletus Kasady. 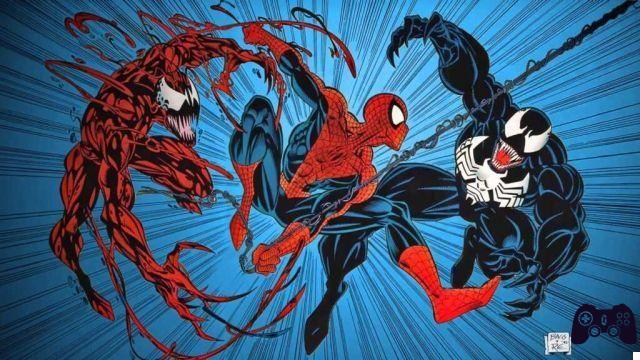 Dislike to skin, over skin - Fortnite: where and how to find Venom and Carnage

If you want to find Venom and Carnage on Fortnite and you mean put on their clothes but you don't know where to look, for the first of the two you have to go to the shop items. At the writing of this article, DC Comics characters are the masters with a mass return of their skins, in addition to the debut of the controversial (by omnipresence) "Batman Laughing" in time for Halloween. However, with the upcoming interaction between Tom Hardy's Venom (itself a separate skin) and Marvel Cinematic Universe Spider-Man following the events of the Carnage film (which the skin aims to promote), expect to see see him again in December.

As for Carnage, it is the Battle Pass final skin: If you got Rick Sanchez in the previous season you will know what that means. Each level up will earn you five stars to spend on the pass screen, but as much as the game tries desperately to hide it, the feeling of being able to skip rewards is totally illusory. Unlocking the skins requires you to redeem all the rewards on their page, and some pages require you to get all the items from the previous page. It goes without saying that, sore or not, you'll have to get to level 100 to play as Carnage. 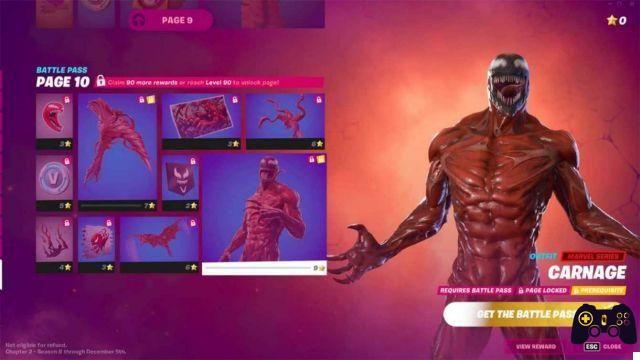 "Get over here" - Fortnite: where and how to find Venom and Carnage

If you want to use Venom and Carnage's weapons, you'll need to get theirs first viticci. The objects in question appear in the form of transparent cylinders, and once collected they will replace your decorative backs as long as you are in possession of the weapon in question. These are not really common weapons, both in name and in fact. Being linked to specific characters, it goes without saying that the rarity of these weapons is set at the maximum threshold: "Mythical". Therefore, expect research that does justice to this high-sounding name: it will be a Herculean feat to stumble upon one of the symbionts.


Or rather, in reality it may not even be: it can happen to run into the weapon completely by chance. It depends on you. On the map you may find spider icons, which indicate the location of the containers. Although their appearance is decreed randomly at the start of each game, these weapons apparently appear more often in the northwest of Podere Pannocchia and southeast of Scaled suburbs. If you really want to look for them on purpose, head to the center of the island and start from there if you want to find it before other players, especially given the functioning of the weapon in question. 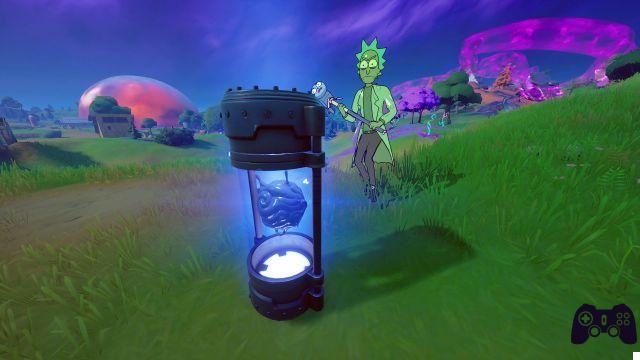 What do I do now?

As weapons, the Venom and Carnage symbionts can be truly fearsome… in the right hands, of course. Once you have collected one of the two symbionts, you can grab enemies as if you were using a Harpoon and inflict an amount of damage equal to 60 (!). Unfortunately, there is a cooldown time between attacks 10 seconds (which you cannot get around, as you can only carry one symbiote with you at a time). The greatest utility of these objects, if aiming is not your forte, is to be able glide at will immediately after a jump, without having to resort to the more or less rare Jumps.

If aiming is not your forte, our advice is to use the weapon to demolish the enemy structures: it is already common sense to do it normally, let alone when it happens (and it happens, trust me) to find among the tasks to be carried out. the demolition of the enemy walls. The slot occupied by the weapon is only one, so you won't have the problem of bringing a Bandaged Bazooka or a Drinking Cannon with them. This weapon is just one of the many new ones introduced from season 8: get used to dealing with it, but try not to get attached to it. The seasonal change is expected in early December.

Fortnite: where to find the Ferrari ❯

Rainbow Six Siege: tips and tricks to use during games

Apex Legends: Legacy, here are the notes of the season 9 patch

Add a comment from Fortnite: where (and how) to find Venom and Carnage