Assassin's Creed: Valhalla, where you will find all the members of The Sons of Danu

The Sons of Danu sect infests the DLC The Wrath of the Druids of Assassin's Creed: Valhalla and in this guide we will see where to find all the members

The new DLC of the last chapter of the signed saga Ubisoft it arrived among us, catapulting us into XNUMXth-century Ireland. In this almost heavenly world, sacred and profane they try to live together, not without a few difficulties. A new land obviously could only hide new pitfalls for our Eivor. In fact, a new sect, called the Sons of Dan, composed mostly of druids who oppose the birth of a Christian kingdom.

Our task, both in the main questline and in the end game, will be to eliminate all 10 members of the sect. When compared toOrder of the Ancients, this is nothing more than a small organization. However, let us not be misled by size. Let's start this guide on where to find all the members of the sect The Sons of Danu of Assassin's Creed: Valhalla and let's find out how to eliminate them.

General information - Where to find all the members of Assassin's Creed's Children of Danu: Valhalla

As already mentioned above, in the sect there will be 10 members in all. These in turn are divided into two categories: i Lord and High Druids. At the head of everything we then find the supreme druid, leader of training and proponent of many of our adventures. As always, some of the members will only reveal themselves during missions, while for others it will be possible to kill them without finding all the clues. These will be clearly visible in their lairs, even if they will be considered as mere enemies. However, we will inform you of this whenever there is the opportunity, without making you go up and down the map in search of clues.

Before continuing with the guide on where to find all the members of Assassin's Creed's Children of Danu: Valhalla is a must explain to you how the targets will be presented. These in fact will not be reported in order of discovery. They will be divided according to their membership, the Lords or High Druids, and will be presented from left to right and top to bottom. It will be an exception to the Oak who, being the head, will be the last of the members to be presented. For greater clarity of the chosen order, you can consult the image below. 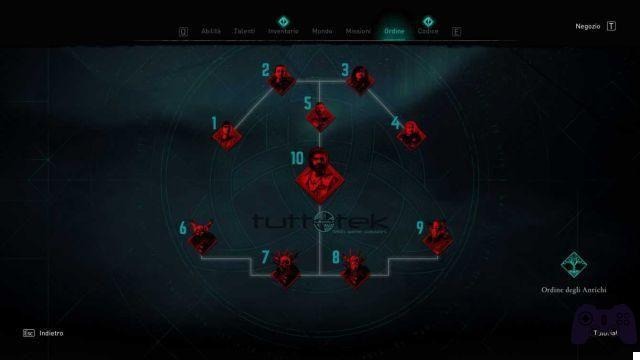 The Lords - Where to find all members of Assassin's Creed's Children of Damage: Valhalla

Below are the five Lords who are part of the upper branch of this particular tree. As mentioned earlier we will start from the one on the left and move to the right, leaving the central one for last.

Ruaidrì of the ports - Il Cervo

Once you have found these two clues, the Deer will be revealed and you can mark it. It will be found on a well protected islet a little further south the trading post of Ardmel. It usually stands along the shore to look at the lake. Once killed you will get a clue regarding the Seme.

Conlae of the flames - The Fulgore

Once all the clues have been collected, the Fulgore will also be revealed. You can then mark it to better follow its path. This member indeed wanders nearby to set fire to cottages and fields near the site of the third clue.

Collect the clues the Spider will also be revealed. Finding it will not be difficult. It will be enough for you go to the Dublin market and you will find your target in front of a stand alone, without even a guard to shield it. Kill her with a sneak attack if you want to speed things up a bit.

Niamh, the poet - The Wren

This will be the first cult member you will find. In fact, it is during the "Blood Potion" mission that we come into contact for the first time with the Sons of Danu. You cannot therefore miss this target as the objective of a main mission. You will find the goal while walking in the square of Rathcroghan, the one with a huge puppet so to speak. The target will never walk alone, so be prepared to face some looks. Killing her will unlock a clue regarding the Curse.

Becc mac Nath-i of the seas - The Seed

It will be impossible not to eliminate this target because, just as it happened for the Wren, this will also be the goal of a main mission. As reported in the clue obtained by the Deer, the Seed resides in the fortress of Dunseverick, in the far north of Ireland. More precisely it will be found inside the tallest tower, near the pots of the plan that runs along the defensive walls. By killing him you will find a clue concerning the Oak.

The Supreme Druids - Where to find all members of Assassin's Creed's Children of Dan: Valhalla

Below are the four High Druids who are part of the lower branch of this particular tree. These will also be presented in order from left to right.

It can be killed directly, without having to collect all the clues. To find its position, all you have to do is follow the mission "Commerce: Having real ivory" which will allow you to unlock the Port Auley trading post. After clearing the place and inspecting the fort for clues, this mission will send you back to Kesh Corann. In this place you will find some enemies ready to wait for you.

Once they are eliminated, head to one of the bonfires and look for the white triangles drawn on the rock. Nearby you will notice the entrance to a cave closed by a destructible wall. To open it, you can use the ranged ability "Incendiary Dust Trap". Enter by eliminating the various enemies, follow the stairs and look for one crack with destructible crates inside. Continue through this ravine and you will come to a cave with two enemies inside, one of which is your target. Killing him will get you a clue concerning the Fulgore.

Leasleach, the madman of the marshes - The Whisper

Once you have collected all the clues you will reveal his identity and you can mark him by seeing his exact location on the map. As the name implies, the Whisper will be found in the marshes. The exact position is not known, since, as was the case with the Fulgore, the target will be moving. Killing her will give you a clue concerning the Spider.

Trian of stone circles - The Fog

This target can also be eliminated directly. Don't worry about having to search for it directly, because you will pass by his position during the mission "Ulaid: Royal Revenge", part of the "Advance North" mission. To eliminate it you will have to go to the Fort of Doon, where you will find the target along with its followers. Pay close attention to the hallucinogenic fog that invades the area. Killing him will get you a clue concerning the Whisper.

Setnae, Druid of the Mists - The Curse

As you can guess, this target is part of a main mission and therefore you will not run the risk of missing it. You just need to follow the various mission markers to meet her. Pay close attention to the puca, the werewolf, who helps the druid and the various followers in the area. Killing it will give you some clues concerning the Oak and the Deer. 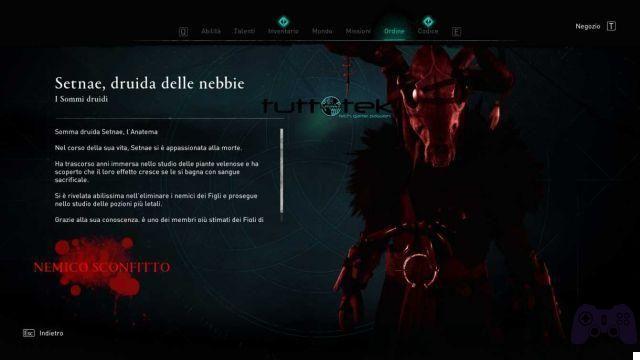 The Supreme Druid, the Oak - Where to find all members of Assassin's Creed's Children of Danu: Valhalla

Once you have collected all the clues, you will discover who the Oak is Eogan son of Carthage, however, you will not be able to mark it. This because you will have to kill him during the main mission which will therefore lead to the extermination of the sect, assuming that you have eliminated all the other members. 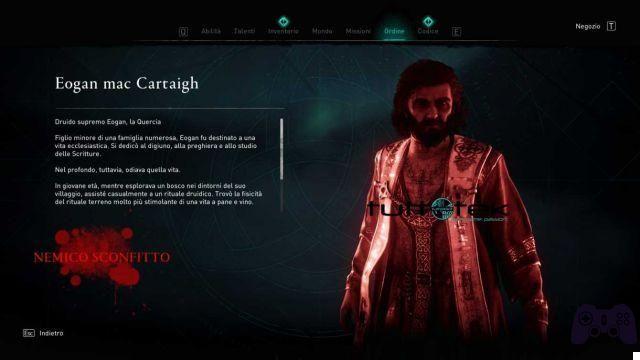 Gae Bolg Spear - Where to Find All the Members of Assassin's Creed's Children of Danu: Valhalla

Once all members are deleted, one will activate secondary mission "Sole d'Ambra" which will allow you to get the lancia Gae Bolg. To do this, you must have entered possession of all 10 pieces of amber, but not only. In fact, once you have brought the various fragments to Deirdre and drunk the potion, you will have to face the mythical Balor, an opponent not exactly easy to take down.

Although all of Ireland has an average level of 55, making it easier to access even for those who have just started playing, this boss is level 409 and can therefore only be faced in the end game. However, once defeated you will get Gae Bolg, the spear that will allow you to strike and stun your enemies with lightning. 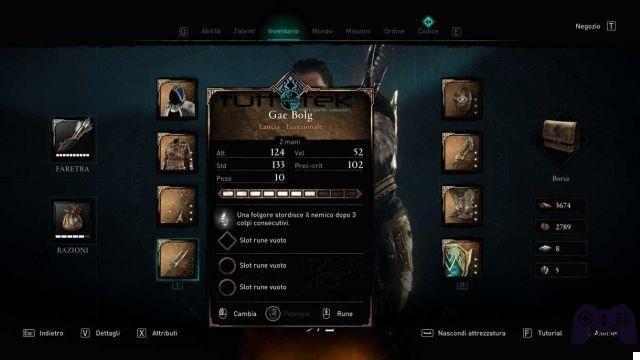 These are all 10 members of The Sons of Danu from Assassin's Creed: Valhalla with all the places where you can also find the related clues. Were you able to eliminate them all? Let us know yours in the comments. We remind you that on Instant Gaming you can find the game and the season pass at a discount. In order not to miss future guides and news relating to the videogame world, continue to follow the pages of Holygamerz!

Back 4 Blood: how to activate crossplay ❯

Add a comment from Assassin's Creed: Valhalla, where you will find all the members of The Sons of Danu