Tales of Arise: how to heal our characters in the new RPG

In this guide we will go to see how to heal your characters in Tales of Arise, the new RPG from Bandai Namco. Let's find out how

Tales of Arise is the new RPG developed and published by Bandai Namco to PC, PlayStation 4, PlayStation 5, Xbox One e Xbox Series X|S. Originally scheduled for 2020, the title was released on 10 September 2021 enjoying good success with both critics and the public. We too had the privilege of being able to review this RPG. To find out how our adventure went, we invite you to read our review. Let's start this guide now on Tales of Arise and let's find out how to heal our characters.

Since the beginning of the series, which took place in the now distant 1995 with Tales of Phantasia, until today, all the main systems of the gameplay have changed and it is right that so. However these can be seen not only between the first and last chapter of the saga, but also between Tales of Arise and Tales of Berseria, released in 2016. One of the systems that most of all has been revolutionized for the better is certainly that of healing.

Changed for the better of course it doesn't necessarily mean easier, rather. In this new chapter in fact it will not be enough for us to spam the Healing Arts to keep the group always healthy. In Tales of Arise, healing is in fact centered on Cure Points and the use of objects. But let's take a closer look at this branched system. 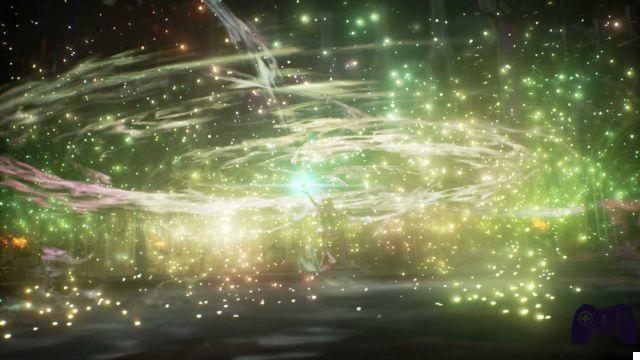 What are Cure Points? - How to heal characters in Tales of Arise

Cure Points are the main source that allows us not only to cast Healing Arts, but any support spells. Each Art will require a certain amount of Cure Points which, once launched, will be consumed and cannot be recovered except through the use of an object or by resting. The Cure Points they are not only useful in battle because they can heal through the use of Arts, but can also be spent outside of the latter to restore the health of the characters.


At the bottom left of the Menu screen you will find the amount of your points. Also here will be given the possibility to restore the group in exchange for a certain amount of Cure Points. This is usually not necessary because i bonfires and inns are within easy reach for a quick trip. However, if you don't want to back down, this is your best bet. 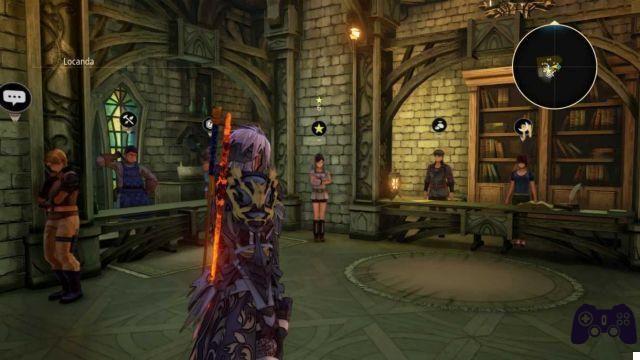 Which items restore Cure Points? - How to heal characters in Tales of Arise

La Orange jelly is the item we all need to restore Cure Points. Unfortunately, unlike other items in the game, this is not generally sold by merchants. They can be obtained by defeating the strongest enemies or they can be found in open areas.

Increasing the battle chain meter increases the likelihood of rare items being dropped during combat. Then jump from one fight to another can considerably increase these possibilities. Keep in mind that Orange Jelly does not fill the entire gauge, so don't think of it as a safety device, but rather as a last resort when the healing items also run out. 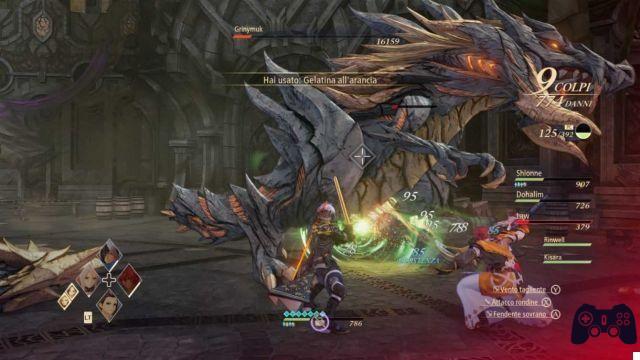 How to heal characters in Tales of Arise

Not all characters in Tales of Arise have the ability to use the healing arts, therefore the characters selected when creating the party will affect how often they heal. Initially we will always have Shionne in the team and she will be the point of reference for both healing and reviving our characters. Later instead we will have access to Kisara and Dohalim who also excel in the healing arts. Finding the right balance with these characters will allow for a balanced team.


Based on what we said a few paragraphs ago, healing occurs through both healing arts and healing objects. Although the cure is not within the reach of all characters, the objects instead can be purchased from any merchant. However, their cost will not be the lowest and it will take away enough of Gald. 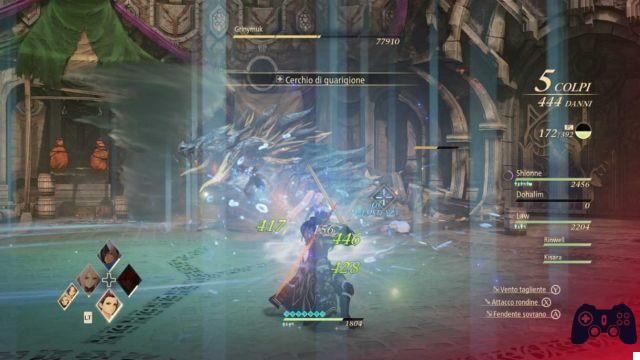 During the adventure we will meet various bonfires and bright circular areas, he said Healing Lights on the ground. These will serve a completely heal and restore the various Cure Points. Although they are very similar in functionality, there is one very important difference. In fact, bonfires can be reused an infinite number of times and the Healing Lights are temporary and they will disappear for a while after using them. Usually the latter are found before an important fight, so take advantage of them and use them every time they appear. 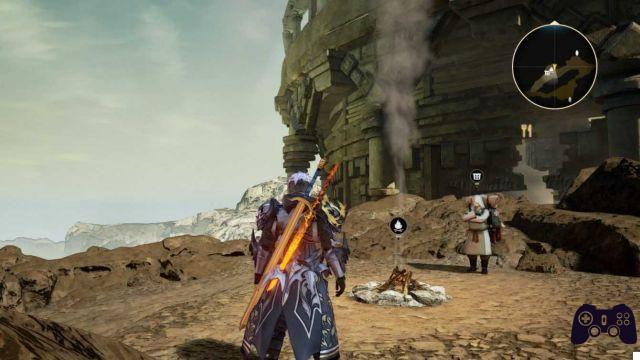 The Healing Art is the class of Arts that has healing or supportive properties in Tales of Arise. Shionne, Dohalim and Kisara all have this ability and can heal you during battle, although each of their healing arts has a unique quality. For example, Shionne can resurrect dead characters while Kisara can throw a giant circle that heals everyone who enters it.

These can be used in two ways: by manually launching them or by using the strategy menu to direct your group to “Cure Priority” as the main tactic. If you are using them manually, you must set a healing art to associate with one of the buttons on the controller. Pressing that button during the battle will initiate a launch sequence and if you manage to finish it without being hit, the Healing Art will activate. 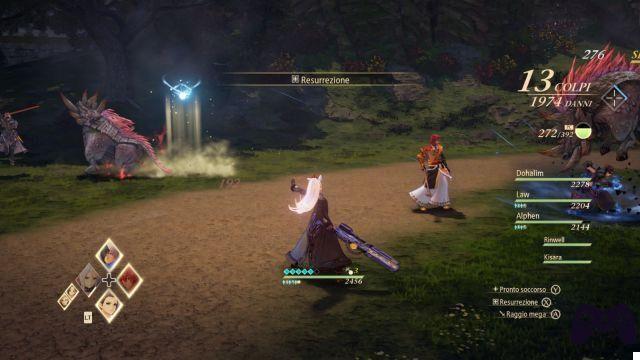 What items restore health? - How to heal characters in Tales of Arise

There are a variety of health restoring items in Tales of Arise, but the main ones are definitely the Apple Jellies and Bottles of Life. Apple Jelly it will restore a small part of health each time we use one and it can be found at every dealer in the game. They are not very expensive, but given the small amount of Gald it will sometimes be difficult to reach the maximum limit of fifteen units.

The Bottles of Life, on the other hand, are much more precious as they are they can bring a group member back to life e they automatically restore a considerable portion of health. There are multiple items that can restore the health of the individual or the entire group, but those are generally found wandering far and wide and there are no guarantees as to when and where to find them. So always make sure you have a good supply of Apple Jellies and Bottles of Life. 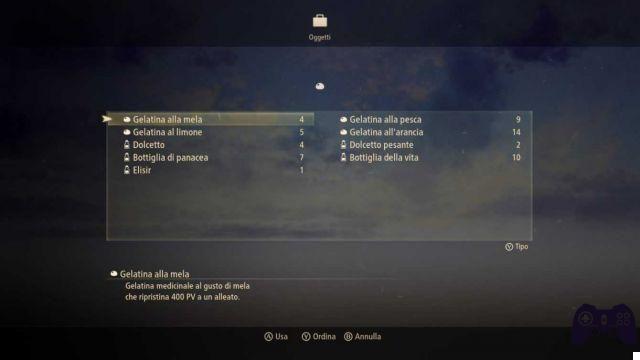 This secure new system will test every player's management skills and keeping stocks full will surely help in the most challenging fights. It's not a simple thing, but it sure is a good system. That's all for this guide on how to heal your characters in Tales of Arise.

We remind you that the title is disponibile per PC, PlayStation 4, PlayStation 5, Xbo One e Xbox Series X | S. What do you think of this treatment system? Let us know yours in the comments. We remind you that on Instant Gaming you can find multiple discounted titles, so check them out. In order not to miss future guides and news regarding the videogame universe, keep following the pages of Holygamerz!

Do you want to be a video game expert and know all the tricks, guides and reviews for your video games ? Holygamerz.com is a group of video game fanatics who want to inform you about the best tricks, guides and tips. We offer you the best information to be a reference in gaming, so here you can find guides, tricks, secrets and tips so you can enjoy your games to the fullest. Are you ready to get all the achievements of that game that you resist so much? Enter now and enjoy your favorite video game to the fullest!
Tales of Arise: how to remove gear and costumes ❯

Tony Hawk's Pro Skater 1 + 2: where to find all the stat points

Add a comment from Tales of Arise: how to heal our characters in the new RPG