Splitgate: how to switch weapons in the various modes

In this short guide, we are going to see how to change weapons in Splitgate, the multiplayer shooter with player-controlled portals recently arrived on all platforms: Halo meets Portal

We already know that the multiplayer arena FPS market is quite saturated and hardly new productions manage to enter it in a striking way. Just think of titles like Overwatch and Valorant, at the top of competitive titles of the genre, to understand the quality and attention that are often placed in productions aimed at the mass. Recently, however, it was announced and released Splitgate, a title of 1047 Games, which aims to create an interesting combination of the typical stylistic features of the genre, that of first-person shooters, and… Portal. The developers have also talked, without closing the doors to an actual possibility, of the inclusion of a battle royale mode, not foreseen for now. In short, Splitgate seems to want to point out that the genre is not dead, on the contrary, and that new ideas can come from the simplest combinations.

The simplest things are always the most complex

In this short guide, we would like to explain how you can switch weapons in the various Splitgate modes. This is because, despite being the 1047 Games game an FPS, has unique mechanics and definitely different from other exponents of the genre. If, in fact, in any Call of Duty or Battlefield to change your equipment you just need to tinker in the lobby, in Splitgate this is not possible. At the beginning of each round, in fact, you will have to choose your Assault Rifle or Carbine and you will not be able to change it in any way until the end of the game. Or not?

We answer big problems with simple solutions - Splitgate: how to change your weapon

If we told you that if you want to change your weapon in Splitgate it will be enough "pick up another“, How would you take it? Because that's actually what you need to do in order to change your gear or tactics, in case you fail to win with your default weapon of choice. Before entering a round, in fact, the game will allow you to choose "your" weapon, customizable and modifiable to your liking, and it will be the one that will be assigned to you at each respawn for that game.

The weapons you can choose at the start of the round vary depending on which mode you choose. However, if, for one reason or another, you decide you want to change your weapon within that same game, the only way you can do it is by collecting another one at the various weapon spawn points. I "gun points"Are scattered around the various maps and, by dint of grinding games in Splitgate, you will learn about their positions. The various weapons available in Splitgate will only appear in these points and knowing where they are will obviously give you a decent advantage over other opponents.

Be careful though: in case you should die, when you respawn you will find yourself in your hand the default weapon that you have chosen before taking the field. We also remind you that Splitgate is still in Beta phase and that the location of these spawn points may change once the final version of the game is released. 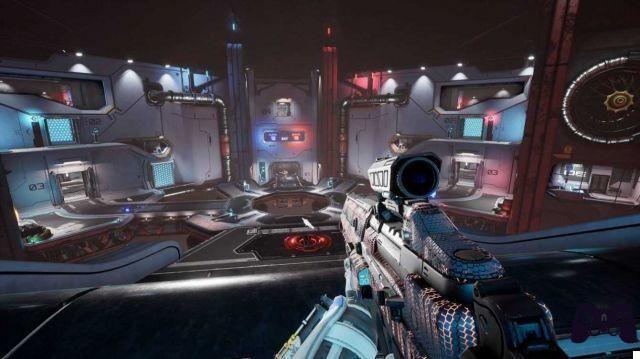 And there you have it, that's all about how you can switch weapons in Splitgate. Hoping to have been useful to you, we ask you: have you already tried the 1047 Games title? What do you think about it? Write it to us below in the comments, we will continue to keep you updated with all the news, guides and reviews on videogame and tech! And if you are interested in game keys at advantageous prices, we recommend that you take a look at the InstantGaming catalog! We remind you that Splitgate is currently available on PC, PS4, PS5, Xbox One and Xbox Series X | S.

Splitgate: here is the tier list with the best weapons ❯

Add a comment from Splitgate: how to switch weapons in the various modes