Ratchet and Clank: Rift Apart, what to know while waiting for the game

Now there is only a month left until the release of one of the most anticipated exclusives of PlayStation 5. Ratchet and Clank: Rift Apart will be available soon, so today we want to give you some goodies on what to know while waiting for the game

There are less than four weeks to the official return of the most famous Lombax ever and company. Since the first presentation (in 2020), thanks also to the numerous teasers released, we have seen a lot of the game. Although the core identity of the brand has remained intact, the whole outline has been renewed and adapted to the new generation of consoles for an experience that promises to be incredible between dimensional leaps, a brand new protagonist and mechanics never seen before. Waiting for the release, we want to give you some tips on what to know while waiting for the release of Ratchet and Clank: Rift Apart.

The entire narrative of Ratchet and Clank: Rift Apart revolves around the separation between Ratchet and Clank. While in the past the separation between the two characters could be considered a "trick" by Insomniac to dedicate more missions to players, and therefore lengthen the soup, in this new adventure it will represent a twist essential. In fact, at the beginning of Rift Apart, our friends will split up following the fall through a portal to a new dimension. At this point, Clank will come into contact with a brand new character: Rivet, a completely new lombax in the series (whose story will likely be told during the game).

Just as Ratchet Clank will be busy reuniting with his mate, finding himself trapped in a town called Nefarious City. The city in question, also unpublished, belongs to a reality in which the wicked Dr. Nefarious (main antagonist of the series) has carried out his evil plans. To stop it, our protagonists will have to join forces in a team never seen before! 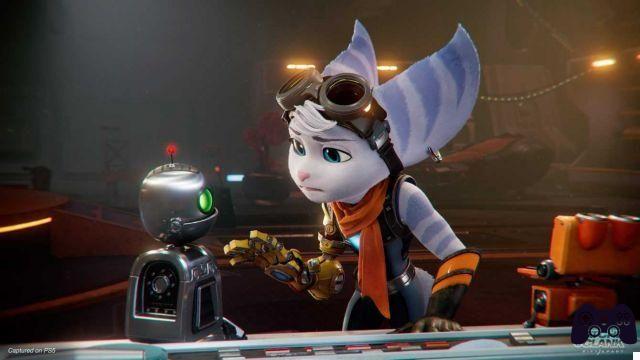 Lots of new features - Ratchet and Clank: Rift Apart, what to know while waiting for the game

The introduction of the new Lombax, Rivet, will not only be a narrative element but it will introduce a second level in gameplay. By dynamically switching between the two characters, players will have a ton of new mechanics and weapons at their disposal. For example, the brand new “Topiary Sprinkler” glove will allow us to transform enemies into helpless plants. The different weapons, including the Burst Pistol o l’Enforcer they will make wise use of the possibilities of the PS5's DualSense and its adaptive triggers. In addition to the classic wall-runs, dashes and other movement features, players will be allowed to open dimensional gates to access certain areas and surprise enemies.

Beyond that, they will be featured in the game numerous additional contents, among which collectibles and different levels of challenge. The planets will be much more open and explorable than in the past, with the possibility of accessing dimensions full of hidden objects. Furthermore, by collecting the components of the various armor, it will be possible to obtain gameplay bonuses, like air battles. A photo mode similar to Marvel's SpiderMan will also be available in Rift Apart. 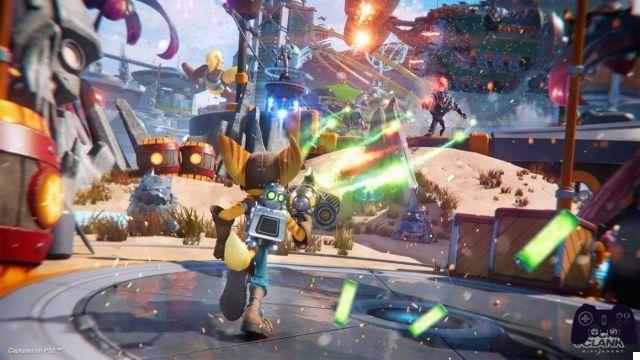 Exclusive pre-order bonuses - Ratchet and Clank: Rift Apart, what to know while waiting for the game

The hardcore fans of Ratchet and Clank will surely do the pre-order of the game to play it from the exact moment it is available. The pre-oders will be available from June 4th, exactly one week before the official release. The weight of the game is confirmed to be of about 42 GB, so nothing prohibitive considering the capacity of the PlayStation 5 SSD. For those who will pre-order the game, Insomniac has reserved some exclusive in-game bonuses. In addition to the gun Pixelizer A stunning red and silver Carbonox armor will also be available for Ratcher and Rivet, a weapon that turns enemies into 8-bit. On the other hand, those who buy the Digital Deluxe Edition of the game will receive five other outfits, a digital artbook and the OST of the game. The bundle will also include 20 Raritarium and an exclusive sticker for the photo mode. Ready to pre-order? 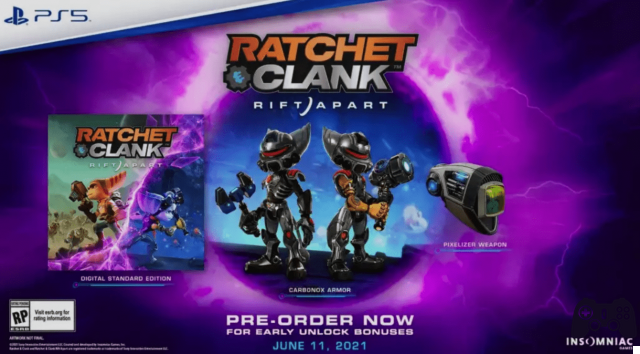 Time is running out

Well friends, these were our pills on what to know about Ratchet and Clank: Rift Apart waiting to get your hands on the game. The hype continues to grow as we approach the release date and now we can't wait to hug our heroes again. As always, we salute you, but not before reminding you to keep following Holygamerz for more guides, reviews, news and much more. Also, don't forget to stay up to date on Instant Gaming for the latest games at super discounted prices. Bye!

add a comment of Ratchet and Clank: Rift Apart, what to know while waiting for the game