New World: how to level up fast

All the tips and tricks to level up quickly in Amazon's new MMORPG, New World

The arrival of N in the MMORPG scene it has brought a breath of fresh air to the panorama of this type of games. Creating a successful MMORPG is tough, given the presence of other giants of the genre such as Final Fantasy XIV and World of Warcraft. Amazon Game Studios however, he decided to launch into this sector with a title that is enjoying some success. In fact, New World has been invaded by many players thanks to its interesting formula based on expeditions and PVP. In this New World guide we explain how to level up quickly within the game, listing some tips and tricks to help new players of this MMORPG.

Priority to the main quest

There are several ways to gain experience points and level up quickly in New World, and undoubtedly the first thing to do is follow the main quest of the game. This will not only give you many experience points for each completed quest, but will also unlock new areas to explore, new extra missions and important items such as the Azoth Staff which will be used later to unlock the expeditions, namely the dungeon of the game.

When you go around looking for a quest, keep your eyes peeled to find some notes related to lore of the game world. You can find them simply by exploring in any situation. These pages give a small amount of experience, and are a plus if you find them while you are on another quest.

We also recommend that you start immediately a level up the skills related to the collection of materials. Try to bring mining and harvesting to at least 30, as some main story quests require certain materials to complete, and you may be caught off guard by these requests and waste time later on increasing these skills. Also, the materials you don't need for quests can always be resold to get some extra money.


Faction Quest - New World: How to level up fast

Another way to quickly level up in New World is to dedicate yourself to the quests of the various factions in the game. Everyday the first three faction quests done they will give you many more experience points than normal, so it will be worthwhile to dedicate some time to them when you log into the game daily. Some of these missions will revolve around killing wild beasts like wolves, sheep and other animals, and you will often find many other players doing the same missions as you. Attack a creature that is already attacked from another player will not reduce the number needed to complete your quest, since you have to be the first to hit the animal for this, but it will still give you experience points for your character and your weapons. An alternative therefore better than simply waiting for new enemies to appear.

Also beware of the territories you enter: each is ruled by a certain faction and doing quests and other activities will earn you points with one of the various settlements present. Doing this will raise the level of each faction which will give you access to some bonuses such as l’XP Boost, with which you will get many more experience points for each mission done within that territory.

Don't forget to unlock the temples for the quick trip, usually there are at least a couple of them for each territory, so as to exponentially decrease travel times during explorations. Also remember to always carry a good amount of food with you. In fact, each ration consumed will regenerate a small amount of health constantly for about 20 minutes, so as to speed up the recovery times between one enemy and another.

Weapons and builds - New World: how to level up fast

In New World it is possible to have two weapon slots to be managed as you want. The ideal would be to combine a melee weapon and a ranged weapon, so as to obtain bonuses and abilities from the skill tree of each weapon as it levels up. One of the best weapons to start with is leaves, which, thanks to its Berserk Mode ability allows you to increase damage and movement speed, also guarantees passive healing effects. The second weapon, on the other hand, can vary a lot depending on the player's preferences.

La life staff it can be useful to be autonomous and heal easily in any situation, plus the heal bonus is added to the passive effects of the ax. The bow on the other hand, it further increases the stats related to the speed of movement, and allows you to strike from a distance and then attack in close combat with the ax. But these are just some tips, just choose the best combination of weapons you prefer and try them all to see which one you will be better with.

Selecting your main weapons will be one of the first things to do, as this will help you figure out how to grow your character's attributes. In fact, with each level earned you will get an attribute point to spend. These must be spent on the attributes related to your main weapons in order to get the maximum damage from them. Don't worry about experimenting, up to level 20 it will be possible to reassign attribute points for free.


For the armor to use depends a lot on your style of play. If you prefer a build based on agility then go for light armor - this will increase the damage dealt and the dodge ability, but you will take more damage. Medium armor is a good compromise between agility and protection, while heavy armor is better suited to tank characters who aim for a defensive build to take heavy damage during battles. 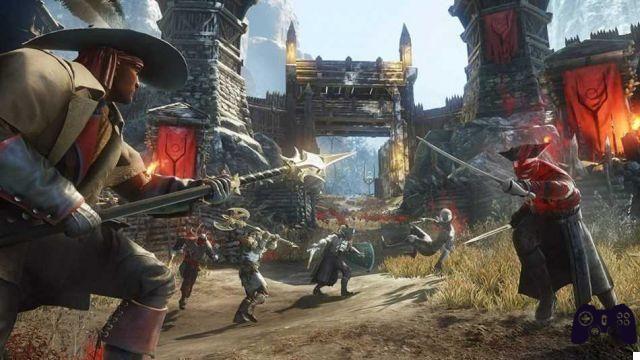 The rewards for each level of New World

Having reached the conclusion of this guide on how to level up quickly in New World it remains only to show you all the rewards that will be obtained once you reach a certain level. For example, you will have to wait until level 10 to be allowed to duel, while level 20 will be needed to get the quest linked to the very important Azoth Staff. In the meantime, you may also be interested in our guide dedicated to tips and tricks for playing your best in New World.

Our guide ends here, but if you need more advice on other games you can stay on Holygamerz also for all the most important news for gamers and beyond. For your purely gaming needs, you can instead find the best discounts in digital format on Instant Gaming.

Nier Replicant: how to unlock all endings ❯

add a comment of New World: how to level up fast