In this episode of our Monster Hunter Rise weapons guide we will talk to you about the sword ax, a tool as complex as it is powerful

To approach a new chapter in the series, however, it is necessary to overcome a great initial obstacle, that is the choice of equipment. Monster Hunter weapons really differ a lot from each other and to become skilled hunters it is essential that you find the one that suits you best. To help you with your research we have therefore decided to write one introductory guide for all Monster Hunter Rise weapons and in this first episode we will talk about the spadascia.

The sword ax is a very powerful weapon that stands out due to its ability to change. This instrument has in fact two very distinct transformations, that of ax And that of sword. The first form allows the player to wield a huge, slow war-ax, while the second instead will make the weapon a kind of very fast sword capable of scoring powerful explosive attacks.

To be able to use the sword at its best, it is essential to learn how to master both transformations. As you will discover later, each of the two forms will allow you to perform specific attacks that may be more or less useful depending on the situation. The need to learn to use both an ax and a sword might scare new players, but really this weapon is much easier to use than you think. Compared to other weapons in Monster Hunter Rise, the only slightly more complex sword element to master is the change bar, but we will talk more about this in the course of our guide. 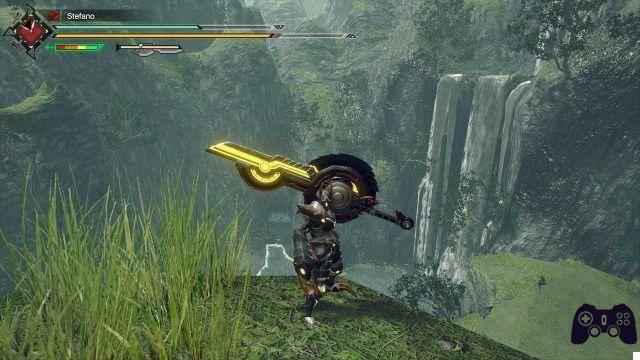 As we anticipated in the previous paragraph of this guide, the sword ax is one of the best weapons to face the many different threats that you will have to face in Monster Hunter Rise. There ax shape has slow and powerful attacks that are perfect for dealing with groups of small monsters or to stagger the big ones.

Specifically, one of the most powerful attacks of this form is the long chain of wide horizontal slits executable by repeatedly pressing "A". This move will force you to stand still and it will consume a large amount of stamina for its entire duration, but in return it will allow you to inflict a lot of damage in a large area. You can also decide at any time to interrupt the chain by pressing "X“, Thus unleashing a powerful downward crash that will temporarily increase your ability to stagger monsters.

In sword shape instead your weapon will be able to perform much faster attacks. Alternating by pressing "X"And"A”You can perform a series of vertical slashes very comfortable for hitting flying monsters, but the technique that most distinguishes this form is the elemental discharge. By pressing "X + A"And then continuing to repeatedly press"X”You can perform a very powerful attack that it will deal repetitive damage and end in a violent explosion. This move will leave you open for a few seconds but, if you are able to find the right moment to use it, you will deal a devastating blow to the monsters. 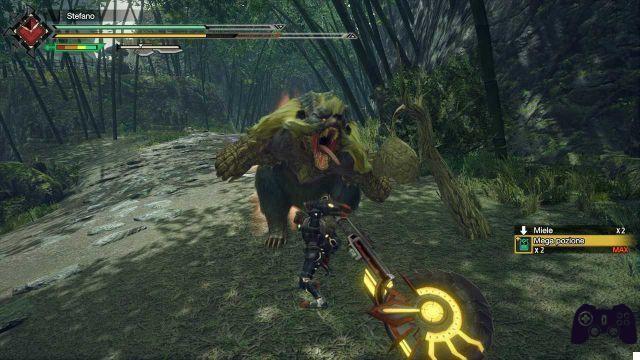 Now the point of our guide has finally arrived where we will tell you about vials, that is particular objects that are exploited by the sword and other weapons of Monster Hunter Rise. These vials contain gods liquids capable of applying various bonus effects to weapons and in the sword they also serve a support the transformation into a sword (each sword sword uses a specific type of vial that cannot be changed). In fact, every time you perform attacks in this form the change bar mentioned above will shrink and once empty you will be forced to return to ax mode.

The bar changed it will regenerate over time as you use the ax, but if you want it is also possible load it manually pressing ZR. This type of recharge, however, will leave you uncovered for a few seconds and therefore it is not recommended to use it in combat.

As if that weren't enough, the sword ax also has an additional indicator called status bar amplified. Unlike the gear bar, this value it will increase each time you land a sword attack. Once full, this gauge will increase the damage of your weapon and especially the effects of the vials for a few minutes. Also while the indicator is full your elemental discharge will change, allowing you to hang on to a monster's body for its entire duration. 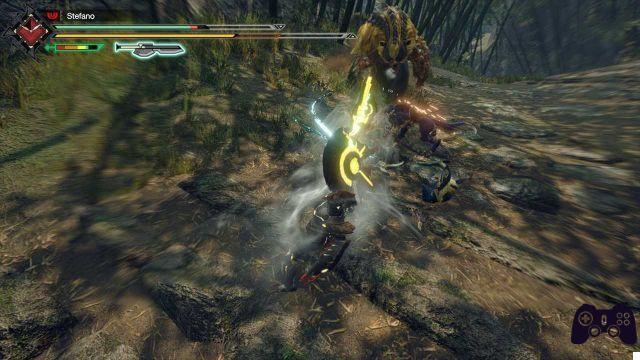 Specifically, the sword-ax thread insect attacks are: invincible gambit e exchange charge. Invincible Gambit is a devastating forward spin attack that will make you immune to rejection for its entire duration. This move is perfect for hitting monsters while they are making annoying but not too powerful attacks.

Charge of Exchange, on the other hand, is a technique that will allow you to advance restoring a part of the gear bar, which moreover it will not drop for a few seconds. This move is perfect for getting close to your target before starting a powerful sword combo or getting out of awkward situations.

In this paragraph of the guide we talked about the attacks with wire insect for the sword ax present in the latest demo of Monster Hunter Rise, but before concluding we would like to remind you that in the full game these techniques may vary based on weapons or other factors. In the various videos shown by Capcom they are present several attacks unusable in the demo, so it is likely that you can change them in some way. 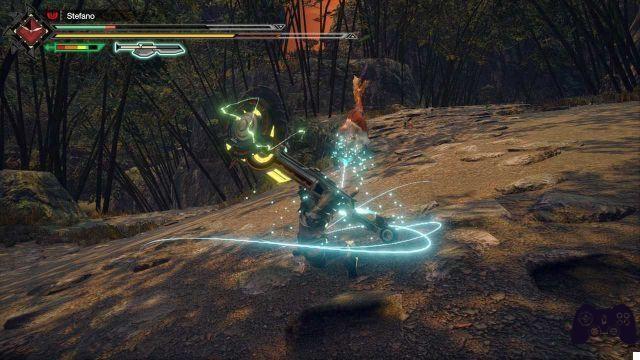 Masters of the ax and sword

This concludes the episode of our Monster Hunter Rise weapons guide dedicated to the sword ax. Now there is nothing left to do but wait for the game to come out and then field test this lethal hybrid weapon.

In case you want to know more about the game, we invite you to read ours preview. Also, if this guide dedicated to the sword ax was useful to you, we suggest you check out the other articles on Monster Hunter Rise weapons here on the site as well: