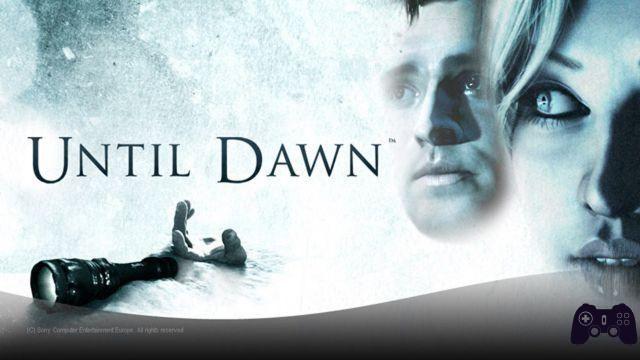 The ability to scare the player and at the same time of prevent him from taking his hands off the pad it is a feature that only titles of a certain level can boast. Given the recent rediscovery of the genre horror  and of the increasingly important narrative component in the videogame field, the boys of Supermassive Games, here at their first major job, they take us up PlayStation 4 Until Dawn, a title full of tension where our every decision will influence the future of the 8 protagonists of the story. Will this title set on the top of a snowy mountain manage to cool our hot summer with its shivers of fear? As you prepare yourself psychologically to find out in a few lines, we remind you that Until Dawn is available exclusively on PlayStation 4 starting from August 26 2015.

8 characters in search of an author

La plot di Until Dawn sees 8 friends return to a mountain hut a year after the disappearance of two of their dearest friends. The idea? Celebrate until you drop and toast the memory of the two young girls who vanished near the woods. Bosco who obviously hides more than a few secrets and that it will make the life of the group extremely difficult in what could be, for everyone, their last night of life. Until Dawn looks like the most classic of teen horror, with a series of stereotypical characters capable of making the worst decisions at the wrong time and with continuous jump scare at every possible opportunity. The license plate title Supermassive Games, however, manages to immediately conquer the player thanks to the possibility of shaping the future of our characters through the choice of actions and dialogues capable of making stereotypes evolve into something much more articulated and complex. The horror atmosphere, moreover, it turns out extremely accurate and will put even the most experienced players in a state of anxiety; although, we must admit, some narrative choices lead to the last part not being as disturbing as the first half of the game. Precisely regarding the aforementioned choices we must make a small parenthesis: in the final part of Until Dawn there are narrative solutions that, we are sure, will not be able to conquer everyone, going to divide the audience. Let me be clear: these are not elements that will compromise the result of the title, but allow you to remove or add half a point to the final evaluation of the work based on your personal tastes (personally I found everything extremely satisfying and able to surprise even the most pay attention to the plot, NdLuca). It should also be emphasized that, through the cutscenes between the various chapters, the mood of the title becomes more and more tense based on our fears. In these scenes, in fact, we will meet a psychologist (with the multifaceted face of Peter stormare) who will subject us to some tests on our deepest fears. Our answers to his questions will therefore determine the presence of elements coming from our nightmares within the story, not a little increasing the identification with the protagonists and pushing us on more than one occasion to experience moments of great fear and discomfort. Until Dawn's storyline unfolds across 10 chapters lasting about an hour each, although it is not possible to make an exact estimate of the longevity of this title as the death of even one of the various protagonists will affect the history and duration of the same.

Hi, I want to play a game with you. Choose: Live or Die? Make your choice!

The relationships between the various characters are therefore fundamental and must be treated with skill, without ever taking lightly every line of dialogue

Il gameplay di Until Dawn is inspired by that of the now famous Heavy Rain (and, a few years later, Beyond), allowing us to move our characters within the various game areas to examine objects, putting us in the situation of making choices capable of influencing the plot e leaving to the QTE (Quick Time Events) the unfolding of the action sequences. Unlike the branded titles Quantic Dream, however, every variation of the story it will heavily affect the plot and they are not limited to which path to take (and which will inevitably lead to the same goal). Our every decision, in fact, will affect the development of the narrative plot, and not only with the addition or removal of small cut scenes, but deciding the life and death of our characters even after chapters away. All this happens thanks toButterfly Effect, an extremely refined gameplay element that will allow all our choices to determine the evolution of the plot and the relationships between the characters. Saying the right thing at the right time, for example, could lead us to sympathize with a group member who, a few chapters later, may have to choose whether to save our lives or not. The relationships between the various characters are therefore fundamental and must be treated with skill, without ever taking lightly every line of dialogue. There is also a particular type of QTE which, in a completely innovative way, fits perfectly with the type of game. We will be obliged, in fact, to stay perfectly still in moments of high tension, risking to lose the life of our character with every slight leap of fear or with every too heavy breath. We must admit, however, that the commands are sometimes too cumbersome and that moving within the various scenarios is not always easy and comfortable. For owners of the PlayStation Camerafinally, there is one fun feature which consists in the automatic recording of small videos during the most important jumps and which, at a later time, are fun to review.

The expressiveness of the characters, thanks to motion capture, is therefore incredibly precise

Il technical sector di Until Dawn, as far as of excellent level, boasts ups and downs. Graphically the title from Supermassive Games makes polygonal modeling of characters its strong point. In fact, each protagonist is played by a more or less famous actor, among which stand out Hayden Panettiere (Heroes) as Sam, Rami Malek (A Night at the Museum) in Josh's and Bratt Dalton (Agent of SHIELD) in those of Mike. The expressiveness of the characters, thanks to motion capture, it is therefore incredibly accurate, but it seemed to us that the movements of the body, however good, were not at the height of the faces, making the sometimes slightly woody characters. Different speech for the audio compartment which boasts one high quality soundtrack and one of the best English dubbing ever made for a video game. The weakness, however, turns out to be the dubbing in other languages which, despite a good acting, Arrives muffled to the player's ear and sometimes, out of sync with the movement of the lips. This defect in the audio, which can be avoided simply by activating the English language in the game settings, is evident above all in the first chapter of the game where the result is similar to what would be obtained in recording a conversation between two people with the mobile phone, but fortunately the situation improves as the story continues.


Verdict 8.5 / 10 9 for those who loved the ending, 8 for those who did not appreciate it Comment Until Dawn is a strong, exciting, well-finished title capable of making even the bravest player jump in the chair. Despite an ending that will divide the audience in two, the work by Supermassive Games we are sure that it will be able to conquer a large slice of players thanks to the mechanism of the Butterfly Effect and to a better direction than 90% of current horror films. Too bad for the Spanish audio sector below the original one, but this is not an element that significantly damages the final evaluation. In a nutshell: Until Dawn is the title that every horror-loving PlayStation 4 owner shouldn't miss! Pros and cons ✓ Nightmare atmosphere
✓ Curated story and non-trivial characters
✓ Successful and engaging butterfly effect
✓ Excellent face modeling
✓ Original quality sound compartment
✓ Final that will enhance some ... x ... but that won't completely satisfy others
x Badly mixed Spanish dub
x Sometimes woody characters

Do you want to be a video game expert and know all the tricks, guides and reviews for your video games ? Holygamerz.com is a group of video game fanatics who want to inform you about the best tricks, guides and tips. We offer you the best information to be a reference in gaming, so here you can find guides, tricks, secrets and tips so you can enjoy your games to the fullest. Are you ready to get all the achievements of that game that you resist so much? Enter now and enjoy your favorite video game to the fullest!
Metal Gear Survive Review ❯