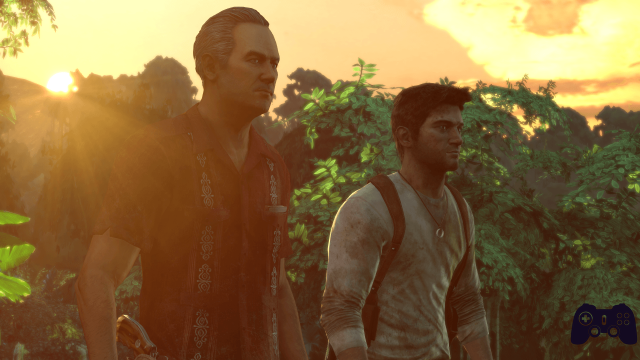 Talking about how the history of the Playstation brand is almost double-handed with that of Naugthy Dog, which accompanied every console of the Sony brand with at least a trilogy of titles acclaimed practically unanimously, would probably be the most banal way to introduce the subject of this review. On the other hand, it is less trivial to turn the subject upside down in a certain sense, observing how the Californian software house has grown together with its audience: from the "innocent" platformers of the Crash Bandicoot series to the raw narrative of The Last of Us, passing through products that showed the team's propensity for action such as the trilogy of Jak and Daxter and titles that have cleared the cinematic vein such as the first three Uncharted. And it is precisely the latter that we want to deal with today, on the occasion of the review of the Nathan Drake Collection packaged by Bluepoint games, real experts with an undoubted pedigree when it comes to conversions (just mention the Metal Gear Solid HD Collection or, to stay in the Sony world, the collection of ICO and Shadow of the Colossus). Will the Texan studio have managed to collect a witness never as heavy as in this case and to bring to Playstation 4 the strengths of the trilogy that at the time showed off the muscles of Playstation 3?

From humble beginnings to great enterprises

Uncharted: Drake's Fortune already shows all the salient features of the saga

Obviously, the first chapter of the series, Uncharted: Drake's Fortune, released at the end of 2007, opens the collection, in a moment that is actually not particularly brilliant for Sony's gaming machine. The events revolve around Nathan Drake, descendant of Sir Francis Drake who thanks to a ring that belonged to the English corsair manages to locate the alleged coffin of his ancestor, containing a diary with all the information to reach the legendary El Dorado, almost from first bars of the experience presented as a "simple" and huge golden statue. Drake's Fortune already demonstrates in the first hours of the game that it possesses most of the characteristics that have made the series famous: while not inventing practically anything new and not offering unpublished mechanics, this first chapter of Nate's exploits manages to put on the screen an undoubted playful sector, halfway between the platform (although much more linear and "guided" than what seen in Jak and Daxter) and the third person shooter. At the same time, thanks to an Indiana Jones-style plot, excellent characters and above all the damn inspired and funny dialogues, the tone of the production comes as close as ever to the canons of a Hollywood production: the final result therefore cannot fail to be noticed. both by critics and the public, laying the foundations for the definitive explosion of the series that will be consolidated in the following chapters.

Overall, the first chapter is the most "restored"

Of the three chapters proposed in this collection Drake's Fortune is probably the one that has benefited most from Bluepoint's "restoration" work, which has not limited itself to making the title reach 1080p and 60 frames per second, but has also refined everything on the texture front, rendering and above all by modifying the lighting management and adding new particle effects to the various settings . The only ones, net of the arguments on the present contents that we will address later, concern some visual smudging a bit too evident (especially with regard to the interpenetration of polygons when Nate is hanging from the ledge in turn), in addition to some animations enemies that are too showy when they are eliminated (with leaps and somersaults often almost caricatured). Drake's Fortune therefore, despite a punctual work by the Texan house, of the proposed titles is the one that feels the weight of the years most and appears in general the least successful, while still confirming itself as a worthy progenitor for the franchise.

Is an ancient Tibetan ritual dagger in your pocket?

The excursion continues with the HD version of Uncharted 2: Il Covo dei Ladri (born in 2009), the first chapter of the series to bear the subtitle in Spanish (instead of the original "Among Thieves") and traditionally recognized as the most successful chapter . Francis Drake and El Dorado this time give way to the Venetian Marco Polo and the Cintamani stone, a sort of equivalent of the Holy Grail for the Buddhist religion. On the playful front, Il Covo dei Ladri files the less convincing aspects of the first chapter and focuses all or almost instead on the strengths that emerged two years earlier: the action becomes much more spectacular and cinematic, with decidedly adrenaline-pumping sequences that see Nate having to flee (on foot) in an alley while a Jeep chases him or battle between the rooftops with a helicopter. However, we do not always go to a thousand and the clips with the most suitable rhythm alternate more platform phases or based on some enigma, or even weighing more than the progenitor the importance of the most stealthy sections and in general the "bare-handed" gameplay, not distorted but certainly refined, as it can be said in general for the game formula as a whole.

At the levels of the remaster of The Last of Us

Also thanks to the starting point, which at the time and for a long time was the reference point from a technical (and not only visual) point of view for the computational capabilities of Playstation 3, the final result obtained by Bluepoint is tremendously solid, comparable to the level reached by Naughty Dog with The Last of Us Remastered. Also in this case some smudges, especially from the parts of the interpenetration of polygons, are not lacking, but in essence Uncharted 2 is confirmed as a great title even with these six more years on the shoulders.

A high jump of two years and here we are back to 2011 with the remastering of Uncharted 3: Drake's Deception, the last (for now) chapter of the saga except for The Golden Abyss released the following year on Playstation Vita ( but edited by Bend Studio). In this case "winning team does not change", e more than refining the formula here, the Californian team has slightly tweaked some aspects (for example, a greater importance of the objects present on the scenario, which can now be used to hit enemies, should be pointed out) while leaving the substance unchanged. On the narrative level, on the other hand, we range more and, if Il Covo dei Ladri began "in medias res" and then continued in a linear way, here the temporal leap is more marked, even coming to tell the first meeting between Nate and Victor "Sully ”Sallivan, mentor and sidekick of the protagonist (and we add the author of some of the funniest jokes in the series). Calling into question the protagonist's past allows, playing with the theme of deception, to give an unprecedented glimpse of Nathan Drake, glimpsing what is hidden under the mask of the treasure hunter: therefore Sir Francis Drake inevitably returns after the "Pause" of Uncharted 2, on whose tracks (and on those of Lawrence of Arabia) the protagonists and antagonists will move.

On the adaptation front, we can only repeat the beautiful words spent a paragraph ago, both on the original work by Naughty Dog (which further improves what we saw in the previous chapter, especially as regards the animations) and on the retouching work by Bluepoint, punctual and decidedly effective also against Drake's Deception, while also presenting imperfections here.

True greatness lies in how you play the cards you have

The absences of L'Abisso d'Oro and multiplayer are heavy, but what is lacking is above all the content for the fans

If, as mentioned, the restoration work by Bluepoint was carried out more than diligently, we still have some complaints to make on the content side: the absences of the aforementioned Uncharted: the Golden Abyss certainly weigh originally released on Playstation Vita (excluded, according to Naughty Dog, as more "secluded" than the trilogy released on PS3) and the multiplayer components of the second and third installments, in this case, however, partially compensated by the multiplayer beta of Uncharted 4: End of a Thief that will arrive later for all buyers of the collection. But the most serious "fault" in our opinion is that of not having fully learned the lesson taught last year by 343 Industries with Halo: The Master Chief Collection, a perfect example of how to package a product of this type without proposing it as a collection designed for beginners, excluding in a certain way the historical aficionados. Welcome extras such as new trophies, new difficulty levels (very easy and brutal) and the Speed ​​Run mode, as well as the online rankings in arcade sauce that allow a certain distance comparison with friends, but (also considered the cinematic DNA of the series) some “Director's Cut” style content would have been a significant added value for those who have already enjoyed the three adventures in the last generation. As another nice incentive it would have been to have freely available all the contents present in-game immediately, being able to choose which chapter of which game to play without necessarily having to complete the experience at least once or be able to benefit from the beginning of the skins and other modifiers present. In any case, it remains a job that can only be defined well done, but which inevitably has a much more marked appeal towards those who have never approached the series.

Verdict 8.5 / 10 You sound like someone who has never seen a Nazi submarine in the middle of the jungle Comment Uncharted: The Nathan Drake Collection is an unmissable event for all those players who, for one reason or another, during the last generation did not they had the opportunity to experience first-hand the three chapters released on PS3 dedicated to Nate, Sully and the rest of the cast. The remastering work was carried out in a timely manner, net of some small flaws, and allows the three titles to still be able to have their say even after a few years. There remains only a little bitterness in the mouth for the absence of some "sop" for fans of the series, who right now have as their only purchase incentive the possibility of getting their hands on the Uncharted 4 Beta Multiplayer and we are sure they would have appreciated a few more extras. Pros and cons ✓ Three great titles
✓ Great remastering job ... x ... With some burrs
x No news of substance
x The Golden Abyss and multiplayer are missing
Do you want to be a video game expert and know all the tricks, guides and reviews for your video games ? Holygamerz.com is a group of video game fanatics who want to inform you about the best tricks, guides and tips. We offer you the best information to be a reference in gaming, so here you can find guides, tricks, secrets and tips so you can enjoy your games to the fullest. Are you ready to get all the achievements of that game that you resist so much? Enter now and enjoy your favorite video game to the fullest!
SingStar Review: Ultimate Party ❯

Add a comment from Uncharted review: The Nathan Drake Collection