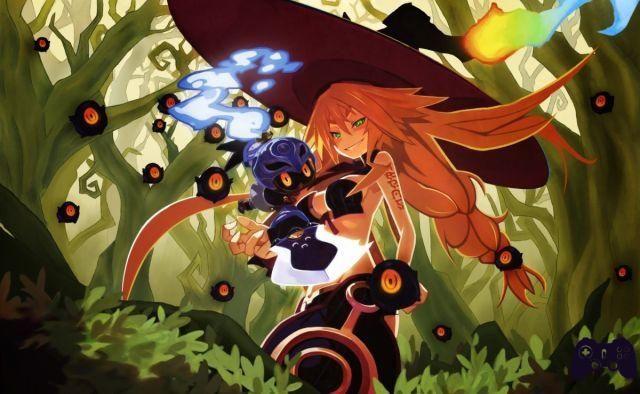 Nippon Ichi Software is NIS, has always satisfied that slice of gamers who love Japanese anime and JRPG, mixing everything in games full of quotes and fan service, from the most varied themes.
And so after the adventures of the prince of demons Laharl in Disgaea, after the events related to the console war of Hyperdimension Neptunia (of which he is only distributor), and after the boy who became God of the most recent Guided Fate Paradox, it's time to meet the witch Metallia (Metallica in the original version) and her familiar Hundred Knight.

The Witch and the Hundred Knight narrates the vicissitudes of Metallia, the swamp witch, hated by all and relegated to living in her shack, at least until she summons the legendary familiar, our Hundred Knight, and she will begin to take her revenge against the witches and the world that despises her so much.
The plan of Metallia is to expand its swamp around the world, in such a way as to increase its powers and be able to teleport at will, to do this Hundred Knight will have to make the Pillar of Temperance , of the obelisks capable of spreading the green substance that gives the powers and strengths to its mistress.
But this is only the beginning of the adventure of the two, who will meet numerous adversaries on their way, including the Witches of the council of Walpurgis, but also several allies such as the astronomer Lucchini, and each blossomed pillar will shed more and more light on the true goal of Metallia.
As in any other NIS game, the dialogues between the characters are the real protagonists and, if to those who are not used to long spoken segments they may seem useless and verbose, the accustomed will enjoy every rant of Metallia against the poor supporting actors of the game.
The plot of The Witch and the Hundred Knight he will be able to kidnap the player who will give him time to blossom and that it will resist undeterred for the fifty hours required to complete it (superficially) given the strong themes such as psychological bullying and diversity, already seen in millions of other games, but treated with the typical NIS style and black humor.

The Witch and the Hundred Knight mixes mechanics from different genres, offering a wide choice of entertainment, from the action RPG, to the Management, passing through the Hack 'n slash and the Dungeon Crawler.
The game map is divided into zones, in each of them, ours Hundred Knight he will have to make his way among magical creatures using his five white weapons, which can be chained together increasing their power thanks to the sequence of magical symbols present on each.
To dodge enemy attacks, just press X at the right time (as long as stamina allows it) and, as in many actions, if Hundred Knight it will react at the exact moment in which it is about to be hit, it will activate the counterattack, in this case it will slow down the time for a few seconds allowing you to rage on the immobile monster.
The player will have to manage his time well, in fact, on the knight's head you will find a flame fed to Gigacalories (Gcal) which decreases with every second passed in the stage.
If the knight dies, he will be brought back to life at the cost of Gcal, if they run out, the hero's life will begin to drop dramatically, leading him to the inevitable Game Over.
To avoid all this in addition to the classic objects of any self-respecting role-playing game, you can resort to cannibalism: by reducing the life of the opponents you can activate the QTE (Quick Time Eat) where Hundred Knight will literally eat the victim, restoring Gcal, but filling the stomach with garbage.


The goal, as already written, is to make the Obelisks in the area bloom, not only to increase the powers of Metallia, but also to use the Grade Points obtained by defeating the enemies, both to recharge the Gcal, and to temporarily upgrade (up to 'exit from the stage) the parameters of Hundred Knight.
Obelisks are also the only way back to the main hub, that is the swamp of Metallia, and therefore keep the objects collected in the stomach (expandable) and the experience obtained in the stage to level up the "Classes”Of our knight (which we will talk about shortly).
Finally a little note about the Chaos Revelation, the ace in the hole of Hundred Knight, which allows at any time (if you have the necessary APs) to unleash the innate strength of the knight, however causing the irreversible decrease of Gcal.
La Chaos Revelation makes common bosses and monsters more vulnerable to Hundred Knight attacks, drastically lowering the difficulty of the battles and completely canceling any strategy based on dodging (and slowing down time) or using the right weapon at the right time.

Our hero will have several aspects available during the game: these Classes provide him with various implements of statistics and, of the six available, you can use up to a maximum of three per stage.
Each Class has, in addition to its own pros and cons, a personal level, which will increase thanks to the experience obtained every time you complete an area by returning to the swamp of Metallia.
At any time, while exploring the level, you can switch between the three selected aspects, but to set new ones you will have to go back to the main hub.
Closes the circle of abilities of Hundred Knight the ability to summon i Tochka, special pets that will allow them to better explore the game areas: in addition to those for skills such as transforming monsters into objects, or jumping on higher platforms that will be donated by Metallia itself during the adventure, scattered throughout the levels are other offensive or defensive tochkas (for a total of 9 summons) such as a rotating fortress, an explorer familiar, or a small army of miniature knights.


While exploring the areas, it will often happen to come across villages or camps, inhabited by harmless and uncharacterized NPCs, who will only talk to Hundred Knight and they will react differently depending on the Karma: when you find yourself in front of a building, in fact, you can decide whether to conquer it or simply visit it, in the first case, depending on the level of the knight, you will be able to get a treasure thanks to Witch Domination, which will also raise the level of Karma mentioned above.
Unfortunately Karma is one of the worst exploited parameters of The Witch and the Hundred Knight, in fact, the only difference that will be found will be in the higher prices of the shops.
Otherwise, if you kill many enemies of the same species, they will change their attitude, becoming more fearful or more aggressive.
In addition to dropping objects and new weapons, enemies could drop pieces of soul, to be used in the swamp to obtain various more or less useful benefits: unfortunately the only one of these "necessary" upgrades is the Tochka, while the others are useless or at least superfluous, soon making the hunt for the soul a mere accumulation.
The mix of the various gameplay is therefore half successful, leaving too many elements pending or poorly developed (in addition to those mentioned above also the multiple answers to the few questions posed to ours Hundred Knight that do not change the direction of events) but it will surely give some satisfaction to action rpg lovers who will learn to chain the knight's combos.

The Witch and The Hundred Knight offers the classic skits that NIS has accustomed us to in recent years, populated by 2D Sprites with different animations and facial expressions. Each character, in this form, is characterized with the usual extreme care of the team, recalling Japanese animation in several aspects.
Unfortunately we find the inevitable downside during the 3D scenes, with an isometric view, the characters of the title look like plastic puppets, and not only that, certain moments of the plot with important themes lose much of the effect due to these. Scripted "puppets".
This graphic defect is only noticeable during the dialogues since, during the actual gameplay, and the exploration of the areas, the animations of Hundred Knight are more than acceptable: given the very nature "Anime"Of the title, also considering that after each chapter the credits start as at the end of an episode, we would have preferred animated scenes at least for the most important events at the end of the plot.
Fortunately, to help this defect, we find a varied soundtrack that fishes in different genres, from metal to opera, passing through some songs that can be defined as “Laytoneschi”.
The Japanese double digit is impeccable as usual, although many names have been changed in the English translation: The Witch and The Hundred Knight is in fact only available in the Anglo-Saxon language, as is now the NIS tradition.

Verdict 7.5 / 10 Denigrated by those who have no ears Comment The Witch and the Hundred Knight convinces in part, as if on the one hand the sound sector well made, the main characters over the top, and much of the gameplay that offers more than one inspiration for the games of the genre will conquer all lovers of classic NIS games, on the other hand there is a backward graphic sector (when it does not concern the sprites) and too many things left unfinished. NIS has thrown into the cauldron, it is appropriate to say, too many elements, and some of these are really underdeveloped or left to themselves; The gameplay of The Witch and the Hundred Knight is an experiment that, having experienced these errors, could offer a lot in one of the company's future titles. Pros and cons ✓ Impact soundtrack
✓ Well crafted character design
✓ Rich gameplay ... x Dated graphic appearance
x … But with some useless parameters
Do you want to be a video game expert and know all the tricks, guides and reviews for your video games ? Holygamerz.com is a group of video game fanatics who want to inform you about the best tricks, guides and tips. We offer you the best information to be a reference in gaming, so here you can find guides, tricks, secrets and tips so you can enjoy your games to the fullest. Are you ready to get all the achievements of that game that you resist so much? Enter now and enjoy your favorite video game to the fullest!
Dragon's Dogma Review ❯

Guardians of the Galaxy Episode 2: Under Pressure review

Add a comment from The Witch and the Hundred Knight Review