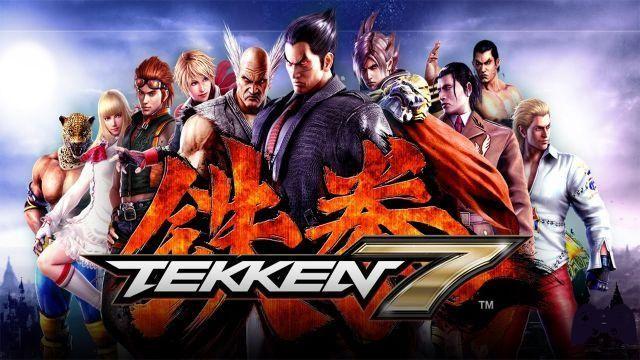 At the turn of May and June, the ranking is hit in the face by the new and highly anticipated chapter of the cult series Bandai Namco Entertainment, Tekken 7!

Pad in hand is a weekly column that does not want so much to report the ranking of the best-selling games of the week, but rather to exploit them to reason, elaborate and segmentalize the videogame market of the boot.


After last week's exploit, Overwatch, Blizzard's immortal legendary creature, holds second place in the AESVI weekly ranking, but nothing can against the "blows" of the most beloved fighter in the boot, Tekken, which with the seventh chapter immediately imposes itself in first position, at its debut on the market (strictly in the PS4 version), throwing out of the ring in one fell swoop two fearsome contenders in the Heavyweight category: Injustice 2 and related superheroes and supervillains DC (which in its first week established itself as Tekken 7 in this one) and the evergreen Ultra Street Fighter II: The Final Challengers for Switch. But before we set out along the path of weekly analysis, here is the complete ranking.

For two fighting games that greet us with their heads held high, a third title comes out of the top 10 again, Call of Duty Infinite Warfare: Legacy Edition, who evidently fired his latest cartridges last week, but never say never with the Activision flag holder. The ranking is confirmed, if there was the need, a Switch with the PlayStation 4 around, paraphrasing the mythical slogan of Polo mint candies. And with the goodbye of the umpteenth re-edition of Street Fighter II, the only flagship of the new Nintendo flagship remains Mario Kart 8 Deluxe, who, however, must have made a small mistake on the last lap and now finds himself exactly in the middle of the standings, chasing a podium that seemed unable to escape him for a long time. Thanks to this slowdown in pace, MXGP3 The Official Motocross Videogame di Milestone, captained by champion Tony Cairoli, is pushing Mario and the karting company in sixth position during the launch week, dirtying with mud and drifting in front of the usual suspects Minecraft, Grand Theft Auto V e Horizon: Zero Dawn, which apparently not everyone still owns. When it comes to engines and above all to official titles, success is assured, by good fans of all forms of sport. Which brings us to a FIFA 17 permanently in the top 3, more precisely on the lowest step of the podium, in full fever from the final of the season and the Champions League, played last June 3 (just troll the bianconeri). Will it be the beginning of the physiological decline towards the transfer market and the '17 / '18 season of EA Sports? Only next week will he tell us. Another return closes the ranking, Tom Clancy's Ghost Recon Wildlands, which from time to time comes back to peep, based on the hidden desire for Bolivia that resides in each, while the other creature of the American writer and Ubisoft, Rainbow Six Siege, remains proud in fourth position as an impassable roadblock.

in short, great love for the Tekken saga, a known and palpable love, so much so that the third chapter is probably one of the most played and known titles, a true milestone in the adolescence of millions of Italian players. Let's try to make the fortune-tellers and we expect that next week it will still be in the top 3. A ranking, the next, which perhaps is preparing to welcome another fighting game, this time made in Nintendo, that is Arms, out just tomorrow and particularly appreciated by our Guido. It will be the litmus test for a Switch on the crest of the wave and to see if the market will prove welcoming towards this new intellectual property. Good game everyone and I recommend, always with the pad in hand!

Do you want to be a video game expert and know all the tricks, guides and reviews for your video games ? Holygamerz.com is a group of video game fanatics who want to inform you about the best tricks, guides and tips. We offer you the best information to be a reference in gaming, so here you can find guides, tricks, secrets and tips so you can enjoy your games to the fullest. Are you ready to get all the achievements of that game that you resist so much? Enter now and enjoy your favorite video game to the fullest!
News Dark Rose Valkyrie arrives on PC in April ❯

News Relegation: ICO and the meaning of videogame life

Special Nintendaro against nintendrone: guide to reactions to Nintendo Switch

Special Without the Eyes of Amazement: In Search of Meltan

Add a comment from Special With the pad in hand: sales rankings from 29/5 to 4/6