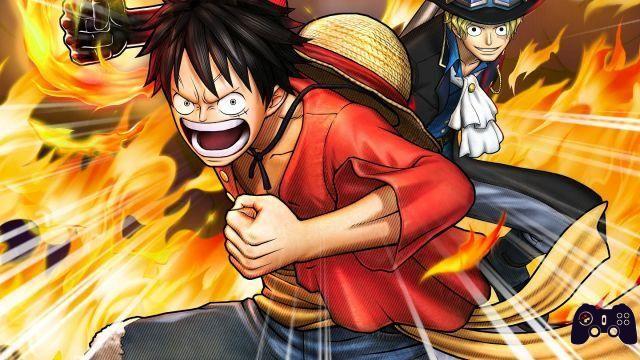 The One Piece saga is one of the most famous of the Japanese Shonen landscape and many licensed games have tried to pay homage to the work of Eiichiro Oda, the Pirate Warriors saga is one of these titles. Developed by Omega Force (creators among other things of Dinasty Warriors and Hyrule Warriors, released last year on Wii U) One Piece: Pirate Warriors 3 (now only Pirate Warriors 3) is one of the flagship titles of this summer just passed and we are here to analyze it with you after having previewed it a few months ago at the Level Up guests of Bandai Namco Entertainment.

One Piece: Pirate Warriors 3 belongs to the category of musou, that is, the type of games where your character will have to deal with huge ranks of enemies to be killed with special moves and with the help of secondary characters who will lend a hand in the enterprise. The Pirate Warriors saga debuts on Play Station Vita (in the West, in Japan the previous chapter was also released on a laptop), PlayStation 4 and on PC with a game capable of being appreciated even by those unfamiliar with the saga of the master Oda thanks to the "Legend's Diary" mode which tells the story of story of One Piece from the first volume up to Dressrosa (except the ending, which does not coincide with that of the manga since the saga ended a few weeks ago in Japan, where Pirate Warriors 3 was released last March 27) passing through the thousand adventures that Monkey D. Luffy and his crew will face off to get to One Piece, the treasure that awaits them in Raftel. In the "Diary of the Legend" the narration will take place through some cartoon-style dialogues or through some videos with the graphics of the game, unfortunately the QTEs have not been implemented to end the battles against the bosses as in the first chapter but so the player can enjoy better the scene that will appear on the screen. In this mode we will not be able to use all the characters but only those designated to tell the story of that particular episode and based on the enemies defeated, the time spent to complete the level and the "!" (which we will talk about later) it will be possible to receive an evaluation that varies from E to S. This evaluation, together with other particular objectives such as defeating a certain character or completing all the treasure events will allow you to unlock new and powerful coins with which to upgrade your pirate. The treasure events are present only in the "Legend Diary" and consist of completing certain actions, such as "bring character x to zone y" or "defeat character z using k", in order to recreate some scenes in the manga and in the anime and thus complete the narrative. There are also two other modes called "Free Diary" and "Diary of Dreams" which are less restrictive both on the characters to be used and on the objectives to be accomplished to pass the level. The first allows you to face the levels of the "Diary of the Legend" using any character while the second consists in facing enemies upon enemies to conquer the islands and face powerful opponents that can only be unlocked through this mode such as Shanks, Fujitora and Gecko Moria. All modes can be played in local multiplayer, allowing you to unlock multiple treasure events at a time in the "Legend's Diary" for example, and there is also an online component that allows two players to face an episode and work together to get the same events and coins that can be used to increase the parameters of the characters.

One of the complaints fans have made to previous Pirate Warriors titles is that the roster of playable characters has always been very limited compared to a work that contains hundreds of heroes each with their own strength and charisma. Omega Force for Pirate Warriors 3 added 10 characters thus bringing the number of usable pirates to 37 even if important personalities such as Arlong, Mr. 2, Vista and many others have been left out. However, these are available as support even if during the missions they appear with their moves and their polygonal models will not be usable as protagonists. Pirate Warriors 3 as mentioned before is one of the exponents of the musou genre which consists in facing a huge number of enemies to reach a particular goal that is defeating a powerful enemy or reaching a certain super protected place does not matter: just hit. The character is moved via the left analog stick, the combos are performed via the square and triangle buttons while the circle button is dedicated to special moves. For the back buttons we have L1 which allows you to adjust the camera by bringing it behind the character (otherwise you can move with the right stick), L2 for the viewfinder on enemies

powerful, R1 for a unique attack for each character (for Luffy it is the Gomu Gomu No Pistol for example) and with R2 instead you can activate the Kizuna Rush which is one of the biggest news of this chapter. During each level we will be accompanied by characters who will help us throughout the journey and will be represented by a bar (which you can see on the left and is divided into three degrees plus a secret) that fills up as the enemies are defeated, called the bar Kizuna. Once filled the first time it will be possible at the end of the combos to recall your partner with square and triangle to make a powerful attack that will give additional points to the Kizuna bar and kills "!" useful to complete the levels with rank S. Once the Kizuna bar is completely filled it will be possible with R2 to unleash the Kizuna Rush: a period during which all the combos will be more powerful and will attack together with your partner (or your companions in case are more than one) and by pressing the circle button it will be possible to make a devastating finishing move that is often required to complete the Legend Level of each episode. Thanks to Kizuna Rush the gameplay is significantly changed and will often help less experienced players to get out of trouble against the most powerful enemies. Unfortunately, the enemies are not so varied and we will often find ourselves facing characters that are always the same while a great distinction has been made for the main characters of Oda's work who are very similar to their animated counterparts both in terms of movements and behavior on the battlefield. . It should also be noted that compared to the previous chapter, a better balance of the characters has also been made and those a little more difficult to use (such as Marco) have been arranged so that they can be used with more freedom.

Technically, the title on Playstation 4 shows all the power of the console which is able to withstand many enemies on the screen without particular pop-up effects (present only in maps with some particular climatic conditions) and showing a stable frame-rate, at 60 fps, most of the time only dropping when hundreds and hundreds of enemies are visible on the screen with also effects like fire and water. On Playstation Vita the title performs less well given the characteristics of the laptop: frame drops and pop ups are frequent for enemies that often do not exceed twenty at the same time on the screen. On the portable console the commands also change by delegating the lock of the enemies and the Kizuna Rush to the lower part of the touch, unfortunately during the action it is not always easy to press the correct part of the screen and it will not happen a few times to activate the Kizuna Rush by mistake instead. of the simple lock. On both consoles the dubbing is Japanese with the official voice actors of the anime and subtitles in Spanish are available, unfortunately some wrong adaptation choices are to be reported such as "Oh Come My Way" instead of "Okama Way" but all have been kept the original names of the characters.


Verdict 8.5 / 10 My treasure? You can have it, if you just want it ... Look for it. I left everything in a certain place. Comment One Piece: Pirate Warriors 3 is definitely the best chapter of the saga, Omega Force has made good use of the power of Playstation 4 while trying to do the best it could to keep the essence of the game on Playstation Vita as well. If you are a musou lover and want to discover the history of One Piece, it is super recommended and is also suitable for those who love Eiichiro Oda's product given the faithful reproduction of all the volumes released so far. All the doubts of the preview have been dispelled and the work done with this title is to be commended. Pros and cons ✓ The whole story of One Piece in one game
✓ Almost technically flawless
✓ Some characters have been added ... x .. Unfortunately, however, they are not enough.
x Some drop in frame rate remains especially on the Vita version

Do you want to be a video game expert and know all the tricks, guides and reviews for your video games ? Holygamerz.com is a group of video game fanatics who want to inform you about the best tricks, guides and tips. We offer you the best information to be a reference in gaming, so here you can find guides, tricks, secrets and tips so you can enjoy your games to the fullest. Are you ready to get all the achievements of that game that you resist so much? Enter now and enjoy your favorite video game to the fullest!
Kingdom Hearts 3D Review: Dream Drop Distance ❯

Add a comment from One Piece: Pirate Warriors 3 review