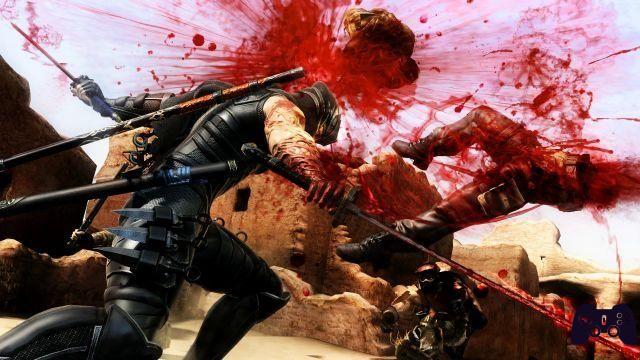 In March 2012 the highly anticipated Ninja Gaiden 3, the third installment of Ryu Hayabusa's modern saga, disappointed any fan of the series by failing to meet most of the expectations that had been created around the game, especially on a technical level by presenting a gameplay extremely minimalist in a brand that is historically a niche and aimed at a certain slice of passionate hardcore gamers.
Taking advantage of the launch of Wii U and the agreement with Nintendo, Team Ninja tries again by bringing to the next generation console a revised and corrected version of the game, exclusively for the same console, which takes the name of Ninja Gaiden 3: Razor's Edge.

The plot of Ninja Gaiden 3: Razor's Edge is, as can be easily understood, the same as the other original versions of the game.
As in Ninja Gaiden 3, Ryu Hayabusa is contacted by the Ministry of Foreign Affairs to save a British minister from terrorist aims; our ninja then goes to London only to discover that he himself is the real target of the aforementioned rascals. Once face to face the leader of these, a man wearing a mask and a red hood, curses our hero by fusing the Sword of the Dragon with his right arm, only to flee into thin air. During the news following this event, the masked man asks for the surrender of the world in seven days, or else he will destroy everything that populates it. Ryu therefore sets off on a journey to stop him, on a tour of the planet Earth that will take him to different locations, from the desert to the jungle, tearing apart increasingly bigger, strange and evil enemies; as if that weren't enough, the Assassin's Vise - this is the name of the curse - feeds on the people killed by Hayabusa in the course of his adventures and, fans know, the victims have been too many: occasionally (about once per chapter , ed) we will then find ourselves having to fight hordes of enemies in Ryu's subconscious, so as not to expand the curse outside the arm.
The plot looks like that of a Hollywood trash blockbuster, a mixture of alchemy, science and black magic between dinosaurs, demons and soldiers regardless of pain or severed limbs; it will probably be forgotten very soon due to its flatness and excessive predictability.
Team Ninja has decided to add a couple of extra chapters just for this version, where we could use the beautiful Ayane and slice the soldiers with the lethal damsel…
We also recommend that male audiences shake the Gamepad during scenes filmed with any girl. You will not regret it!

It is not just a port

Let's move on to the core of the game, what has always been the heart of the Ninja Gaiden series, the technical gameplay that inspires awe to casual players, the elaborate combos that can't be wrong and the timely saves and dodges to avoid ending up in front of the game screen. Game over.
In the previous version, Team Ninja made the game all too easy. A single weapon, a single Ninpo (the magical techniques of the ninja, ed), no kill counter and no quartering (except in the brutal finishers). Even the game difficulty was not at all comparable to the first two chapters of the brand and, of course, not in a positive way.
With Razor's Edge, the developer team redeems itself. Ryu, Ayane and the other heroines downloadable for free with the first game update (Kasumi and Momoji) will have up to six different weapons and four Ninpo each, all to be unlocked during the game, which will deepen the already large park-combo available . Team Ninja has listened to the fans disappointed by the original chapter and has also inserted a counter of the combos, of the ratings between one group of enemies and the other and has reintroduced the quartering, so that our Ryu can collect enemy arms, legs and heads as he likes. to him, even without quick time events or destructive finishers. A praise also to the increase in game difficulty, with nerve-wracking features even in normal mode, which now makes this revised third episode at least comparable to the previous chapters.
The online sector is fluid and fun both in cooperative, where we will be able to face 20 missions together with another player, and in the Battle of the Clans, where players compete in two teams of 4 to who kills the greatest number of opponents. Unfortunately the game servers are still almost completely deserted, counting a handful of players are in the evening hours, but we are sure that over time the situation will improve.
As per the title of the paragraph, we must therefore admit that Razor's Edge is the Ninja Gaiden 3 that was not there in March and not just a late port on Wii U, such as Darksiders II and Assassin's Creed 3. Nintendo sincerely thanks.

Another novelty in the game experience are the Karma points, which will be given to us for almost all the actions performed in-game and for having completed the level. These are expendable in the brand new Skills table, which will allow us to increase the park moves and the power of the weapons or Ninpo of Ryu and associates; to access it just touch the touch-screen at the bottom left, obviously in the moments of calm between one massacre and another!
Ninja Gaiden 3 Razor's Edge arrives exclusively on Wii U and obviously uses the Gamepad of the new Nintendo flagship but its use, at least in this round, certainly does not stand out for its originality or genius. Unfortunately this is simply used as an interface to access equipment, skills in real time and to read the thousands of combos available for our protagonists. Perhaps some game mechanics on Gamepad would not have hurt but we are sure that Team Ninja has not opted for such choices for mere reasons of time.

Revised and corrected, but not entirely

If in the gameplay Razor's Edge has improved a lot, the same cannot be said for the excessive linearity of the levels or for the lack of variety of minor enemies. The maps are also limiting and almost not explorable at all, and it is very difficult not to see the collectibles (50 golden scarabs that also unlock various extras in the skill table, ed), how not to foresee the areas where we will be ambushed by hordes of enemies that make Ninja Gaiden 3 more of a very difficult musou game than a full blown action.
The graphics engine is also, predictably, the same that moves the other two versions, so the muscles of the Wii U are practically not shown but the result is satisfactory most of the time, except for the slight frame drops due to too many enemies on. screen.
Finally, on the sound level, the English dubbing is flat and badly acted; fortunately the Japanese voices are more appropriate and listenable. The soundtrack, on the other hand, will soon end up in oblivion, due to songs that are not very original nor capable of leaving a mark.
Ninja Gaiden 3 Razor's Edge is in effect the true third chapter of Ryu's adventures and manages to almost completely redeem the bad figure made on the other consoles. Unfortunately, it suffers from the original subdued plot and the levels of play that are too linear but, in the still limited range of Wii U titles, it could be a very good choice even for those who have never played a chapter of the saga.

Verdict 7.5 / 10 If you shake the gamepad, your tits move Comment Ninja Gaiden 3 Razor's Edge is definitely a good action, which guarantees healthy fun at the lowest difficulties and nerve-wracking challenges in the higher levels, as per the history of the brand. Especially recommended if you haven't played the previous version yet, but also if you want to give Team Ninja another chance. Pros and cons ✓ New Weapons, Nymphs and Characters
✓ Gameplay revised and corrected for the better
✓ Increased difficulty compared to the other versions x Levels too linear
x Anonymous soundtrack
x Almost similar minor enemies
Do you want to be a video game expert and know all the tricks, guides and reviews for your video games ? Holygamerz.com is a group of video game fanatics who want to inform you about the best tricks, guides and tips. We offer you the best information to be a reference in gaming, so here you can find guides, tricks, secrets and tips so you can enjoy your games to the fullest. Are you ready to get all the achievements of that game that you resist so much? Enter now and enjoy your favorite video game to the fullest!
Shaq Fu Review: A Legend Reborn - Shaq Puh! ❯