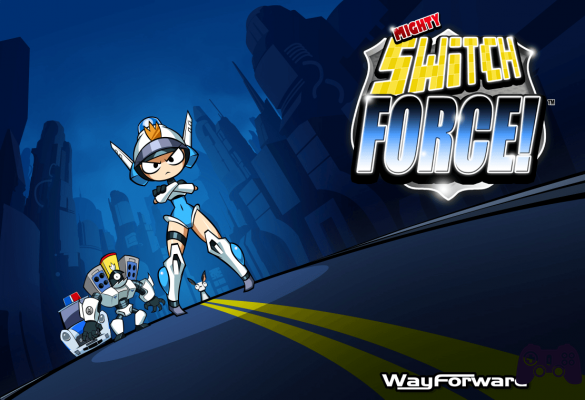 After having risen to the limelight with Shantae, a spectacular 2D platformer for Game Boy Color created in the middle of the Game Boy Advance era, the Californian guys of WayForward have built a reputation over the years thanks to their unmistakable style made of high quality 2D graphics, original gameplay ideas and retro atmospheres. In particular, thanks to titles like Mighty Flip Champs !, Shantae: Risky's Revenge and Mighty Milky Way, the team proved to be one of the absolute best on the otherwise bleak DSiWare landscape.
Given the previous successes on the DSi digital delivery platform, the move to Nintendo eShop of 3DS was rather obvious and Mighty Switch Force! is the first title specifically made by WayForward for Nintendo's 3D laptop.

Welcome to the galactic police!

Mighty Switch Force! puts us in the shoes of agent Patricia Wagon, a sexy cyborg policewoman struggling with the Hooligans sisters, five inmates perpetually involved in escape attempts. In each of the sixteen levels that make up the game we will have to find and catch the five sisters, before reaching an exit point.
The gameplay is that of an old-style 2D platformer, with very heavy puzzle game influences. There will be three actions available to us in addition to movement: we will have a button for the jump, one for the fire and one for the main mechanics of the game, the switching of a block from the background to the action plane and vice versa. The game focuses much of its inventiveness on the latter skill: while the level of challenge offered by the enemies is almost laughable, the real opponent to defeat in Mighty Switch Force! it is the intricate and maniacal level design, which introduces new ideas in almost every one of the missions of the title. Moving blocks in the background to open new roads or moving them to the foreground to create new platforms are just the most basic of possible actions.
As we advance in the game we will have to strategically exploit the ability to move blocks to drop bombs in precise points, to free the line of fire and hit switches, to eliminate enemies otherwise not reachable by our shots. After the very first levels, new block types will also be introduced, such as those capable of throwing Patty through the levels (a bit like the barrels in Donkey Kong Country), the "twin" ones whose position on the background or foreground depends on the block of opposite color, the timed ones and so on, to create patterns that in the final stages of the game become really complicated and to be studied in advance.
Despite the 2D sidescroller gameplay and a timer that emphasizes the urgency of the action, the soul of Mighty Switch Force! it is inextricably linked to puzzle games, and jumping into it without having thought in advance about the moves to be performed is often equivalent to suicide. Just switch at the wrong time to fall into an endless pit, be thrown at an enemy or a trap, be crushed by a block while it is passing into the foreground, or, most frustrating of all, find yourself back at square one in a level. This elegant design has been more than satisfactorily crafted by the development team, thanks to responsive controls and precise and satisfying jump physics.

The obsessive care for animations and 2D sprites have become a trademark for WayForward and Mighty Switch Force over the years! is no exception in this.
The generational leap between DS and 3DS stands out and the game offers much more refined and defined visuals than the previous digital delivery titles of the Californian studio. The 3D effect of the console is particularly well exploited to highlight elements that are on different two-dimensional planes, such as the infamous blocks, and adds considerable appeal to the overall visual impact. The design and graphic style of the levels refers to some classics of the 8 and 16 bit eras, in particular the sagas of Mega Man and Metroid. Tasty gem is the death animation of our heroine, a direct reference to the death animation of Samus Aran in Super Metroid.
The sound aspect is equally cared for, with a soundtrack of 23 tracks, various from each other and definitely catchy. The compositions are partly original and partly remix of the themes of the previous WayForward games, a real love letter for those who have always supported the house by buying games like Mighty Milk Way in the past.
On the other hand, an element that is unsatisfactory is the duration of the title. Most of the levels take between 30 seconds and 5 minutes to complete and despite the very frequent deaths in the second half of the game, it is possible to complete the 21 stages of Mighty Switch Force! in just under two hours. The presence of a timer and times to beat set by the development team for each level slightly increases the longevity of the title and, despite the limited price, it is difficult to avoid feeling a certain feeling of disappointment when the game is completed, not so much because the game is not worth the € 6 it costs but because the fun it is able to give is such that you would like it again and again.

Verdict 8/10 The iconic game of Nintendo eShop, at least in its first months of life Comment Mighty Switch Force! is a Nintendo eShop debut with a bang for WayForward. The Californian team has managed to once again combine one of its own, thanks to a gameplay that is addictive and full of ideas, a respectable technical sector and a design with a particular charm. The short duration and the high degree of difficulty of the final levels are the only negative points of a title that is already a must in the Nintendo 3DS eShop. Pros and cons ✓ Original and addictive gameplay
✓ Spectacular 2D graphics
✓ 3D effect well exploited x Limited duration
x Frustrating in the final stages

Do you want to be a video game expert and know all the tricks, guides and reviews for your video games ? Holygamerz.com is a group of video game fanatics who want to inform you about the best tricks, guides and tips. We offer you the best information to be a reference in gaming, so here you can find guides, tricks, secrets and tips so you can enjoy your games to the fullest. Are you ready to get all the achievements of that game that you resist so much? Enter now and enjoy your favorite video game to the fullest!
News + Sony develops an AI capable of modulating the game difficulty ❯

Max Review: The Curse of Brotherhood

Guardians of the Galaxy Episode 1: Tangled Up in Blue review