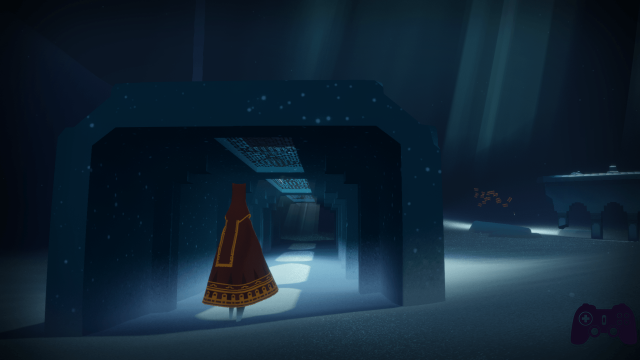 thatgamecompany over the years it has carved out a reputation as a software house capable of sacrificing practically any aspect of its work in the name of experience: for example, it succeeded (perhaps even too hard) with Flower in 2009 and again hit the goal in 2012 with Journey, which today arrives on Playstation 4 promising a "change of clothes" in the name of 1080p and 60 frames per second but leaving the substance unchanged. Will it be worth the trip again?

Put on the scarf in hot cold weather

To put it in one word, Journey is hermetic

Journey, despite being ultimately a linear title (the decision on whether and how much to explore is left to the player, who can then decide whether to dissect the title thoroughly by taking his time or aim straight for the goal) does nothing to take the person on the other side of the screen by the hand: the only certain things are the destination, a peak illuminated by a ray of light that can be seen in the background at the beginning of the game, and the interaction skills of the playable character, explained with simple illustrations that simply indicate the button to press.

In short, the two-three hours necessary to complete the title are remembered not so much for the playful formula or for the narration (which always remains quite hermetic and leaves ample room for interpretation) but for the atmosphere and sensations. aroused by the title of Thatgamecompany.

Have a good trip

The playful component is entirely at the service of
experience

As can be guessed, therefore, even the playful component is completely at the service of the title: the protagonist basically has the sole ability to interact with pieces of cloth (more or less large) thanks to the circle button, which allows him to "sing" a note music that will trigger the reactions of nearby fabrics: these can transport the player in the air allowing him to glide (the flight time essentially depends on the length of the scarf he wears, which gets longer every time you explore the various areas you come across some spheres of light) or changing the scenario. From time to time the various fabric-based environmental puzzles will be integrated or will give way to sections in which the lion's share is played by the scenario or by some enemies present in it, usually to be avoided and circumvented. The bar of the challenge is never too high and, especially if you have already had to deal with similar playful solutions, everything is largely within the scope, leaving as said the responsibility for the success of the title to the more emotional aspects of the experience. .

The multiplayer really hit the spot

In this sense we found the presence of a "hermetic" multiplayer mode perfectly in line with the character of the production., which allows you to meet other players along your journey, but deliberately forgetting both to reveal their identity (if not at the end of the game) and to insert any communication system, limited once again to the notes issued by pressing the circle button. By playing together with the other wandering travelers, exploration is what gains them, since on the one hand it is possible to "reload" (and have it recharged) the scarf in order to take advantage of the glide more often and on the other it is possible to learn from the companion. journey, encountering spheres of light not yet collected or finding hidden cave paintings that reconstruct some events surrounding the experience.

I'd watch you for Journey

Without too many words: beautiful to look at

From a technical point of view, the only drawback of the conversion concerns some sporadic crashes of the title, which involve the forced closure of the game and, when it goes wrong, the loss of the latest progress made. Except for these problems (which we encountered only once during our test) Journey on Playstation 4 is without too many words more beautiful than ever as regards the visual aspect: the increase in resolution is very beneficial to the atmosphere and in general to the cleanliness of the image, which manages to give some glances to be immortalized with the Share button. The soundtrack completes the picture, further increasing the immersion and marrying the characteristics of the latest (for now) Thatgamecompany effort.


Verdict 8.5 / 10 Lovin ', Touchin', Squeezin 'Comment As trivial as it may seem to say it, Journey is the classic title not for everyone: the longevity / price ratio is definitely unbalanced towards the latter and, in the name of the experience itself, the title sacrifices a lot by putting everything at the service of the emotional aspect of the product. The downside, however, records a title that is truly successful from the point of view of the atmosphere and that in general achieves the goal it had set itself, giving the player something on the emotional front while relying on a "sum of the parts" which, visual impact to part, it has nothing exceptional Pros and Cons ✓ Visually more beautiful than ever
✓ Successful atmospheres
✓ Cross Buy with the PS3 version x Unbalanced content / price ratio
x Not for all

Do you want to be a video game expert and know all the tricks, guides and reviews for your video games ? Holygamerz.com is a group of video game fanatics who want to inform you about the best tricks, guides and tips. We offer you the best information to be a reference in gaming, so here you can find guides, tricks, secrets and tips so you can enjoy your games to the fullest. Are you ready to get all the achievements of that game that you resist so much? Enter now and enjoy your favorite video game to the fullest!
Preview The Wonderful 101 (Nintendo Showcase 2013) ❯

It Takes Two | Review, a masterpiece to be experienced as a couple